Netanyahu: Accumulation of Power Creates a New Approach for Israel in Mideast

Bridging the Institutional Gap: The Jewish Art Salon at the CAJM Conference

This week the Conference of American Jewish Museums was held in Philadelphia, Pennsylvania uniting museum directors, curators, and artists from across the country.

The Jewish Art Salon gave a special presentation for the members of the conference hosted at the Philadelphia Museum of Jewish Art. The panel, “A New Creative Spirit” was inspired by the contemporary experience of Jewish artists forming partnerships with American Jewish museums, synagogues, and institutions.

Ori Soltes discussed that it is not the identity of a person that makes his or her art Jewish, but rather the intention. He noted the range of possibilities in that “Jewish art is a topic that encompasses everything, an endless range of different styles and symbols.”

A recurring theme of the panel was the revolution in Jewish art acceptance, a trend skyrocketing in the past decade. Joel Silverstein attributed this in part to contemporary Judaism being more open to embracing visual culture.

The problem with this new found prolific phenomenon is a growing gap between the amount of Jewish art being created and the support by Jewish institutions. “Artists are creating work with no venue to display it,” Silverstein related. 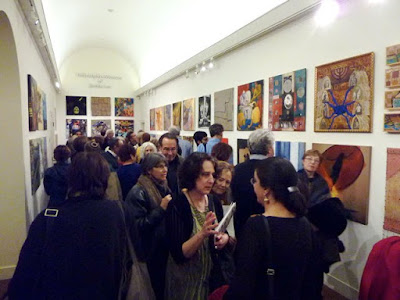 Richard McBee spoke about the Dura Europos Project: An ancient site revisited through 21st century eyes. The exhibition was organized by the Jewish Art Salon and is currently showing at the Philadelphia Museum of Jewish Art.

McBee illustrated the limitlessness of this seemingly niche subject matter by the diversity of artwork in the exhibition. “It is not just the variety of approaches, it is a deeply unique point of view.”

Tobi Kahn discussed the importance of visual imagery in the Torah, bringing the discussion back to Jewish tradition at it’s roots. He related that the visual imagery dictated in the text would not be mentioned in such detail if it was not important.

Cynthia Beth Rubin, a digital artist, spoke about how multimedia exhibitions give a full well-rounded understanding the subject matter presented, citing her involvement with the Orchard Street Synagogue project. Paige Dansinger, an attendee at the conference, noted that “every single discussion and panel talked about digital integration.”

Reflecting on the conference Rubin commented, “these people really get it, that art is synthesized information. It’s not just about spilling out your guts, it comes from real ideas.”

The realization that contemporary art is coming from a place of substance is effecting the overall perception by museum attendees.

David Franklin, director of the Shmooze conference, stated that “the dialogue is changing.”

When asked about the Jewish Art Salon’s take on Israeli art, Richard Mcbee responded, “They have their own thing to unpack.” He explained that The Jewish Art Salon includes Israeli artists but the group in its mission primarily deals with specifically Jewish subject matter.

Joel Silverstein cleverly added, “We suppress politics. When we get together we talk about art. We have Hassidim, feminists, and gay people in our group and no one is arguing. It’s a model for the Jewish community.”

The Jewish Art Salon will be hosting a panel on the Dura Europos Project March 14, 6-7.30pm at the Yeshiva University Museum in New York City.