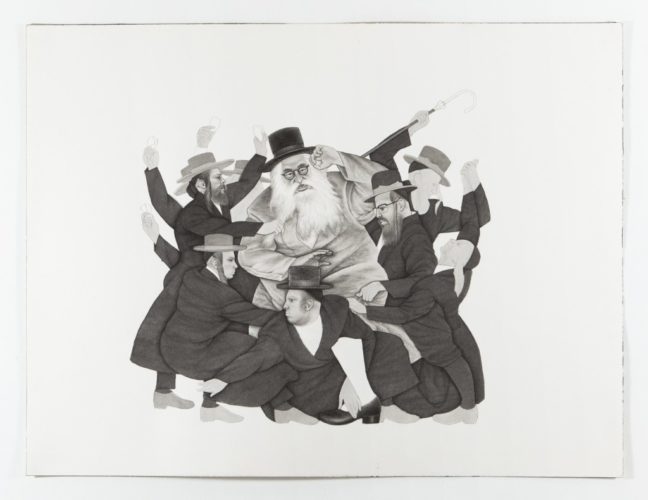 There are two ways people typically explore Hasidic subjects through art. It is either a sensitive portrayal of a tradition they are a part of, or an outsider’s perspective on a strange and unique culture. Brooklyn based artist Michael Levin has done both, and quite successfully at that.

In his new series “Jews of Today” opening July 20th at the 109 Gallery in South Williamsburg, Brooklyn, Levin explores the nuances and contradictions of Hasidic ritual dress through a series of elegant drawings and explanations, delving into larger issues of Jewishness and cultural identity in the process.

Originally from Los Angeles, Levin received his BA in Classics at the University of Chicago in 2006, and this fall he will begin his MFA in Printmaking at Pratt Institute in Brooklyn.

Levin became obsessed with Hasidic culture and dress after becoming neighbors with many Hasidim in the ever gentrifying Williamsburg, and looking for a way to relate to them.

As he noted in an email interview, “I’m looking for a way to relate to Jewishness that is based on knowledge and creativity, rather than ritual or even family. Jewish culture is something I want to be a part of, and I suppose painting Hasidim is a way for me to challenge the boundaries of Hasidic culture (i.e., Do you have to be a Hasid to contribute to Hasidic culture?).

“It’s a fun and challenging question in a neighborhood like Williamsburg, where as you know the boundaries between the ‘artist’ community and the Hasidic community are stark and rarely questioned. This boundary intrigues and motivates me, and I am aiming a lot of my art at undermining it in a way that also preserves it, so as not to taint or destroy what is beautiful about the separateness of these two communities, but to cherish this deeply bizarre confluence of cultures in which we live.”

109 Gallery owner Ryan Krause sees Levin as wanting to embrace a culture on his own terms, yet not being allowed. “He would like to belong to this thing, but he can’t. He is held back.”

Krause said that the gallery was interested in hosting this exhibition because they are situated very close to the Hasidic community, but that people who are not Hasidic do not really understand the details of the culture or go beyond generalizing the one look that they see. “We are showing differentiations between what they are wearing” Krause noted. “On the simplest level,” he said the goal is “to educate [people] about their neighbors, and tackling broader issues of identity and heritage. [This is for] anyone who has a desire to belong to a group and situate yourself in a larger position of meaning.”

The event invitation explains, “It is the inescapability of Levin’s own Jewishness that plagues and pleasures him, and forces the reader to consider their own relationship to faith, religion and identity in the 21st century.”

In addition to the art, Levin has also authored a book. “The book is quite funny too,” Krause noted.

My favorite quote from the artist’s site:

“Master of the Universe, please remove from upon us the plague of the artists, so that we shall not drown in evil waters, and so that they shall not come to our residence to ruin in.” — Prayer for the Protection of Our City Williamsburg from the Plague of the Artists, Zalman Leib Fulop, Satmar Dayyan