Betrayal: FDR and the Jews 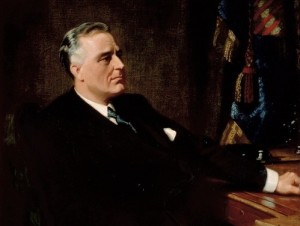 Like everyone else I knew in the Forest Hills of my boyhood, my parents were the American-born children of immigrants from Eastern Europe. But my grandparents, who left Russia and Romania in their desperate quest for freedom, opportunity and children who would become genuine Americans, always remained foreigners. They spoke Yiddish, brewed tea in samovars schlepped from Odessa, and shrieked hysterically – doubtlessly reminded of the Czar’s army – when my beloved uncle was drafted during World War II.

Their allegiance to the United States was pledged every four years when, like the overwhelming majority of American Jews of their generation, they voted for Franklin D. Roosevelt. During my childhood I believed that Roosevelt’s first name was “President”;  he was the closest thing to a Savior that our brand of Americanized Judaism permitted. We listened to his “fireside chats” and during the 1944 presidential campaign my mother dragged me to Queens Boulevard in  pouring rain to cheer his passing motorcade. I vividly remember glimpsing his delightful dog Fala, but not the President. At my father’s suggestion, I even wrote to the White House to ask him to buy a war bond to support our school’s patriotic campaign.

Six months later, the impact of his death registered only with the arrival of Life magazine. It displayed the photograph of a mournful black accordionist, weeping as he played “Going Home” when Roosevelt’s body left Warm Springs for burial in Hyde Park. That image ranked in memory – and still does – with the Jewish boy in Warsaw, my age exactly, raising his arms in terror as he confronted Nazi soldiers; and with the first horrific Life photos of emaciated survivors in the extermination camps.

All those memories were rekindled while I watched “The Roosevelts,” Ken Burns’ new documentary. As a professional historian, mentored by one of the commentators, I had long ago come to realize that FDR hardly was the saint that my parents, extended family, and virtually every American Jew outside privileged German Jewish circles, had worshipped. So I took with many grains of salt, but rising anger, the whitewash of FDR’s indifference to the plight of European Jewry that I was witnessing, even though I knew that disgraceful story all too well.

But not until I read (or reread) some of Roosevelt’s most despicable statements about Jews, extensively documented in a series of on-line commentaries by Rafael Medoff, founding director of The David S. Wyman Institute for Holocaust Studies, did the depths of Roosevelt’s loathing for Jews, and refusal to lift a finger (which, unlike his legs, was not paralyzed) to rescue them, fully penetrate. As far back as 1920, when FDR was the Democratic party candidate for vice president, he had proposed that “the greater part of the foreign population of the City of New York” should be “distributed to different localities upstate” so as to feel pressure to “conform to the manners and customs and requirements of their new home.” As a member of the Harvard board of directors he supported a Jewish admissions quota.

In 1941 he told his Cabinet that too many Jews were federal employees in Oregon. One of his grandsons recalled that the protagonists in FDR’s jokes “were always Lower East Side Jews with heavy accents.” At a wartime White House luncheon with Prime Minister Churchill, he suggested “the best way to settle the Jewish question” was “to spread the Jews thin all over the world.” Indeed, enlightened Hyde Park residents surely would not object to adding “four or five Jewish families.” At the 1945 Yalta conference, FDR indicated to Stalin that as a concession to the king of Saudi Arabia he would “give him the six million Jews in the United States.”

Tragically, Roosevelt’s embedded anti-Semitism was not confined to jokes. It was displayed in the refusal of the American government in 1939 to admit the desperate refugees on board the S.S. St. Louis, who were returned to Germany – or to even fill the quotas that authorized the limited admission of Germans. It was revealed in American government suppression of information about the mass murder of European Jews. The White House opposed a resolution to create the War Refugee Board and delayed its establishment for fourteen months. Orders to bomb railroad tracks leading to the extermination camps were never given, although Nazi facilities merely five miles away were destroyed. And special American missions were launched to rescue art treasures – and performing Lipizzaner horses.

Roosevelt’s anti-Semitism did not cause the Holocaust. But his indifference to the annihilation of European Jewry contributed to its horrific consequences. “The Roosevelts” attempts to airbrush FDR’s dismal failure. Watching it, I was reminded of the power of boyhood myths and the durability of sanitized history. It reaffirmed my decision never to visit the Holocaust Museum in Washington, where a dark empty room would more accurately display  American silence about the fate of Jews that Franklin D. Roosevelt personified. And I understood, more deeply than ever before, why two generations of American Jews were lulled by FDR’s soothing reassurances into believing that their desperate yearning for acceptance was fulfilled.