Hours after this week’s terrorist atrocity at a synagogue in Jerusalem, in which four rabbis and a Druze police officer were murdered, Palestinian Authority President Mahmoud Abbas issued a condemnation regarded by many Israelis as woefully compromised.

And now his own party is helping him walk back on that statement.

Initially, Abbas stated that he “condemns the killing of all civilians by any party, as well as the attack in a synagogue in West Jerusalem.” However, his statement also called for an end to “incursions and provocations by settlers against the Al Aqsa Mosque,” and accused “some” Israeli ministers of incitement. That was greeted with anger in Israel, with Prime Minister Benjamin Netanyahu claiming that the atrocity was “the direct result of the incitement being led by Hamas and Abu Mazen [Abbas’s nom-de-guerre], incitement which the international community is irresponsibly ignoring.”

Many Palestinians, however, believe that Abbas went too far with even this statement. As blogger Elder of Ziyon reports:

A Facebook group called “Abbas does not represent me” has over 140,000 “Likes” so far. It includes this poster showing Abbas as an IDF soldier: 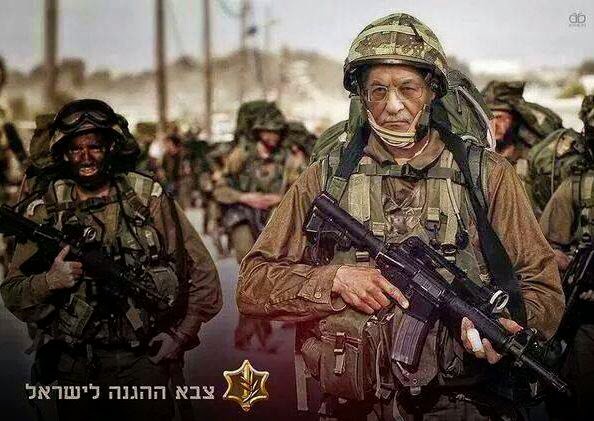 The group is now claiming that Abbas is afflicted with Stockholm syndrome, using as evidence a supposed quote where he says “Israelis are humans like us.”

Yet another one created after the Jerusalem attack shows Abbas with the caption “The people bless and the leadership condemns.” 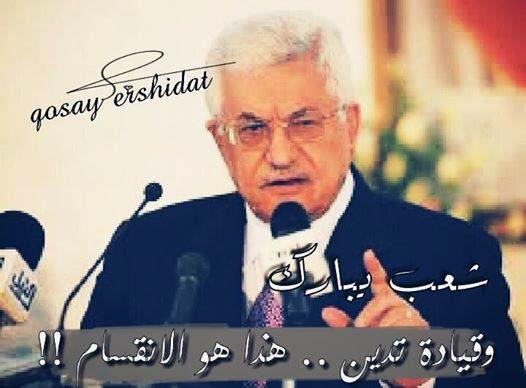 Palestinian anger with Abbas partly explains the following statement from Najat Abu-Bakr, deputy for the PA president’s Fatah movement in the Palestinian Legislative Council (empa from Elder of Ziyon, who originally brought these comments to light:)

The Palestine National Liberation Organization, Fatah, has justified Palestinian President Mahmud Abbas’s statements in which he condemned the operation in Jerusalem yesterday. The organization considered these statements to be political diplomacy, according to a statement by Najat Abu-Bakr, deputy for Fatah in the Palestinian Legislative Council [PLC].

Abu-Bakr expressed her belief that President Abbas’s behaviour under such conditions is the height of diplomacy because he is required to make statements like everyone else. He is responsible for the entire Palestinian people. She pointed out that the public diplomatic front does not accept bloody statements, but ones that are extremely balanced and well-thought out.

Five Israelis were killed yesterday morning, Tuesday [18 November], and others were injured in an operation of shooting and stabbing with cleavers against extremist Jews in a synagogue on the so-called Agassi Street in the western part of occupied Jerusalem. Two Palestinians were also martyred; they were the two who carried out the attack according to reports by Israeli media sources.

Deputy Abu-Bakr clarified that President Abbas is giving the world more time to resolve the Palestinian cause, which is now going through a state of push and shove, while the scale of confrontation with the occupation is increasing. She noted that President Abbas’s statements contain a clear message addressed to those who are aspiring to make Jerusalem a city for the Jews only, that there are forces that will not show any mercy towards the settlers.

She indicated that Israel is currently using a Talmudic policy based on destruction, killing, and saturating the Palestinians with even more death, particularly since the settlers in the West Bank possess 60,000 pieces of weaponry. Yesterday, they had a similar amount added to the weapons they already have, which is a dangerous indicator. Abu-Bakr considered the Israeli victims to be extremist settlers who are storming Al-Aqsa.

Abu-Bakr clarified that the Palestinians today are facing a battle that is spearheaded by the extremists in Israel consisting of rabbis. This situation compels us to always remember that the real base for action is the West Bank, which Israel is desecrating on a daily basis with its crimes.