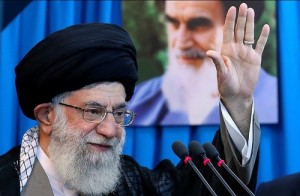 JNS.org – Iranian Supreme Leader Ayatollah Ali Khamenei expressed solidarity on Wednesday with the Palestinians by encouraging them to keep fighting while Iran pledges to “defend [their] movement in any way” they can, according to Iran’s semi-official Press TV.

“The intifada of Palestinian people in the West Bank has started and people are fighting [against the Zionist regime],” Khamenei said.

“About 60 years have passed since the occupation of Palestine and these people have changed for a number of generations, but the cause of Palestine still exists,” Khamenei added.

Meanwhile, Israel’s Transportation Minister Yisrael Katz (Likud) spoke at a conference in Sderot on Wednesday about the fight against terror.

“We cannot fight the wars of yesterday,” Katz said. “This is not an intifada — this is jihad, and the necessary steps must be taken accordingly. Blacklisting the northern branch of the Islamic Movement is the first step in the right direction.”