Buried by the Guardian: Iran Leader’s Religious Justification for Genocide 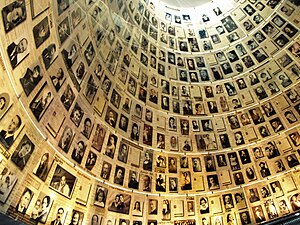 The book, “Buried by the Times: The Holocaust and America’s most important newspaper“, written by Laurel Leff, is an in-depth look at how The NYT failed in its coverage of the fate of European Jews from 1939-1945. It examines how The Times consistently downplayed news of the Holocaust, and how news of Hitler’s ‘final solution’ was hidden from readers, resulting in the minimizing and misunderstanding of modern history’s worst genocide.

Of course, in our post-Shoah world, the homage paid to Jewish victims of the Nazi genocide is nearly universal among the respectable media outlets and opinion leaders – pieties which are often observed, if often perfunctorily, by even the most shrill critics of the modern Jewish state.

Even the Guardian, arguably the most egregious example of the modern respectable left’s disenchantment with the national aspirations of living Jews, has a Holocaust page, and typically shows appropriate reverence for survivors and other expressions of Holocaust remembrance.

However, the Guardian also seems quite comfortable sanctioning voices which accuse Jews of exploiting European Holocaust-guilt to defend Israel, or even those who suggest a moral equivalence between Israel and the Nazi regime, and seem incapable of taking overt antisemitism in the Arab world seriously – even when such malign ideologies are espoused explicitly within the Palestinian territories, part of the region to which they devote a disproportionate degree of coverage.

Similarly, the Guardian’s reporting on the Iranian nuclear threat, in both commentaries and reports, possess several consistent themes: Sowing doubt over evidence that the regime in Tehran is attempting to build a nuclear weapon; arguments that, even if they do aspire to acquire such weapons, the dangers of war with Iran to thwart their nuclear ambitions are not worth the risk; and, finally, skepticism that a nuclear Iran would pose any real risk to the Jewish state, and that Israel’s fears are overblown.

Of course, such consistent “anti-war” rhetoric, downplaying the threat posed by a nuclear Iran, creates a necessary journalistic corollary.  If Guardian readers are to head the calls from the Guardian’s London salon on the inherent madness of taking seriously the manufactured Iranian threat, then any evidence of the Islamist regime’s malign intent against the Jewish state must be buried.

Thus, nowhere on the Guardian’s Iran page will you find mention that a website with close ties to Iran’s supreme leader Ayatollah Ali Khomenei has outlined why it would be religiously acceptable to kill all Jews in Israel – a doctrine, as reported by the Mail Online, which details why the destruction of Israel and the slaughter of all its people would be legally and morally justified, and in accordance with Islamic doctrine.

As the Washington Times reported:

“The article, written by Alireza Forghani, a strategy specialist in Khomeini camp, is now being run on most state-owed conservative sites, including the Revolutionary Guard’s Fars News Agency, showing that the regime endorses the doctrine.”

The government approved essay on Fars News Agency (seen here, which is in Farsi, though you can read it via Google Translate) cites the last census showing Israel has a population of 7.5 million, of which roughly 5.8 million are Jewish. Then it breaks down the districts with the highest concentration of Jews, indicating that three cities (Tel Aviv, Jerusalem and Haifa) contain over 60 percent of the Jewish population that Iran could target.

The Guardian’s cadre of commentators and reporters, so sensitive to every conceivable inequity in Israel between Jew and Arab, Israeli and Palestinian, and so quick to frame every instance of racism as evidence of an endemic, dangerous national lurch towards political darkness, evidently doesn’t view a religious ruling by the highest authorities of the Islamist state, laying out a detailed plan of extermination to be relevant in properly contextualizing the drama surrounding Iran’s nuclear ambitions.

While the Iranian President’s record of support for wiping the Zionist state off the map is well-documented, Khomeini’s Koranic justification, a Fatwa of sorts on the lives of millions of Jews, crosses a line – a moral threshold.

There is, to be sure, the danger which some have succumbed to, of engaging in hyperbole about the Iranian threat.

No, this isn’t the 1930s, and hatred of Jews, which the German journalist Wilhelm Marr rhetorically sanitized as “anti-Semitism” – reflecting the scientific racism of his day – which, though proven resilient (having morphed and adapted to comport to the current political zeitgeist), certainly has lost most of its social grandeur in the democratic world.

Jews in the West are afforded protections unimaginable in centuries past, largely are no longer helpless victims of mob animus, and are not continually ‘the accused’ in diaspora’s trials.

Moreover, the Jews have a sovereign state.  For the first time in 2000 years Jews are masters of their own fate, and can exercise force, both diplomatic and military, in defense of both its interests and, far too often, its lives.

However, the requisite sobriety in assessing the vulnerability of the modern Jewish polity need not devolve into starry-eyed idealism, and the vice of the liberal egocentric impulse to impute reasonableness and good intentions to those whose malign intent towards Jews is undisguised and apparent to all who wish to see.

The stakes are not, and have never been, between war and peace. Whether sanctions, covert actions, or military force is required to assure the continued existence of Israel, at the end of the day we’re left with a stark moral choice.

The decision we’re presented with is whether to allow a regime openly committed to the Jews’ destruction the means to do so.

As Churchill remarked after Chamberlain returned from signing the Munich pact with Hitler:

“You were given the choice between war and dishonor. You chose dishonor and you will have war.”

If I’ve learned anything by studying the Guardian Left, it’s that when faced with a choice between war and dishonor they will choose dishonor every time.

And thus, my Jewish state will more likely face the grim prospect of war.