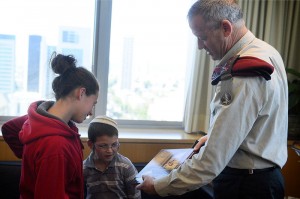 IDF Chief Benny Gantz with the children of the Fogel family from Itamar whose parents and three of their siblings were murdered in a terror attack. Photo: wiki commons.

Ynet – A family from Itamar is expected to move into the house where five members of the Fogel family were butchered by Palestinian terrorists about a year and a half ago, Yedioth Ahronoth reported Wednesday.

On March 11, 2011 Udi Fogel, 36, Ruth Fogel, 35, and three of their children – Yoav, 11, Elad, 4, and three-month-old Hadas – were stabbed to death in their sleep by two young Palestinian men who infiltrated the West Bank settlement.