Are Jews the Most Incompetent ‘Ethnic Cleansers’ in the World? It would be easy to dismiss an absurd comment left by a reader (beneath a recent CiF Watch post about bias at the Irish Times) as simply not worthy of attention.  However, to do so you’d have to ignore polls in Europe demonstrating that the view he expressed about Israel is in fact quite popular.

Our post, on an egregious example of anti-Israel propaganda by Irish Times reporter Frank McDonald, elicited the following friendly advice to Israelis:

stop committing genocide and people will stop criticizing you.

As I indicated above, the charge the Israel is committing genocide against the Palestinians is not at all marginal.

Asked to respond to the statement that “Israel is conducting a war of extermination against the Palestinians,” 63.3 percent of Polish participants expressed agreement, as did 48.8 percent in Portugal, 47.7 percent in Germany, 42.4 percent in Great Britain, 41 percent in Hungary, 38.7 percent in The Netherlands, and 37.6 percent in Italy. 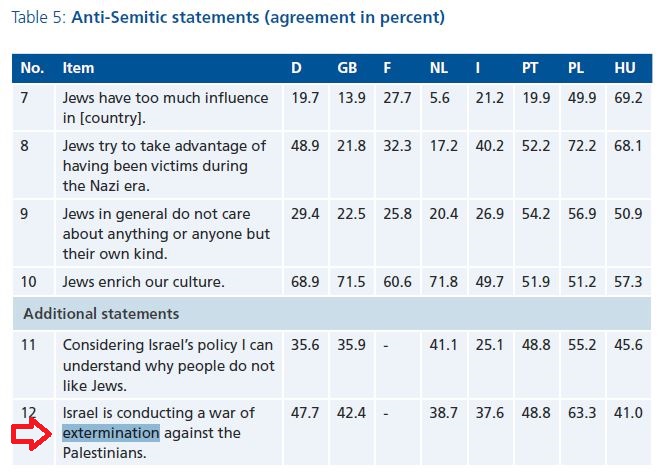 Of course, debating the “question” of whether Israel is conducting a war of extermination against the Palestinians seems at first glance to be as productive as ‘arguing’ whether or not Jews are trying to take over the world. However, unlike the latter charge, which, no matter how hateful and irrational, is not really quantifiable, the former malicious smear – reflecting the “Israel as the new Nazis“ narrative which Richard Landes argues indicates (among other political pathologies) a desire to be freed from Holocaust guilt – can be easily refuted by a few population statistics.

As a point of reference, the Jewish population of Gaza and Palestinian controlled West Bank is practically zero (save a few pro-Palestinian “journalists” who reside there), while the Jewish population in the entire Arab Middle East has decreased from over 850,000 in 1949 to less than 5,000 today.  (Yet, relatedly, despite the almost complete disappearance of Jewish inhabitants in territories they control, Palestinian and Arab leaders continually incite their population to engage in mass murder against Jews in Israel and the diaspora.)

The broad charge that Jews are ethnically cleansing Arabs (Palestinians or otherwise) in the Middle East, based on the numbers, represents the opposite of the truth.  In the territory where Jews rule or have ruled in some manner since 1948 the Arab population has increased dramatically, while territories in the region where Arabs rule (representing over 99% of the total land) have slowly become either nearly or completely Judenrein.

I don’t expect the commenter at our blog to be moved by such dry statistics, but you’d at least hope that those who fancy themselves “sophisticated” Europeans – especially given their ‘special’ history – would at least take notice when empirical data contradicts their secular faith in Jews’ immutable malevolence.

Those suggesting that Israel is conducting “a war of extermination against the Palestinians” are engaging an almost comical historical inversion, and at the very least would have to conclude in the face the evidence that Jews are, by far, the most incompetent practitioners of “ethnic cleansing” on the planet.