Fisking “Middle East expert” Robert Fisk can be especially challenging, as he often pivots seamlessly between mere distortions and outright fabrications within the same essay.  His latest op-ed at The Independent, “The real poison is to be found in Arafat’s legacy,” from Nov. 18, represents a great example of his talent for such multi-faceted misrepresentations.

Though he dismisses recent accusations that Arafat was poisoned, Fisk, in attempting to explain the legacy of the late Palestinian leader, whitewashes his decades-long involvement in lethal terrorist attacks against Israelis, and risibly claims that his biggest character flaw was that he was in fact “too trusting” of Israeli leaders.

He made so many concessions to Israel – because he was growing old and wanted to go to “Palestine” before he died – that his political descendants are still paying for them. Arafat had never seen a Jewish colony on occupied land when he accepted the Oslo agreement. He trusted the Americans. He trusted the Israelis. He trusted anyone who appeared to say the right things. And it must have been exhausting to start his career as a super-“terrorist” in Beirut and then be greeted on the White House lawn as a super-“statesman” and then re-created by Israel as a super-“terrorist” again.

However, the most egregious lie by omission appears later in the essay when he addresses comments Arafat reportedly made about the Grand Mufti of Jerusalem, Haj Amin al-Husseini, per a conversation he had with Edward Said:

Edward Said told me that Arafat said to him in 1985 that “if there’s one thing I don’t want to be, it’s to be like Haj Amin. He was always right, and he got nothing and died in exile.”

Hunted by the British, Haj Amin, the Grand Mufti of Jerusalem, went to Berlin during the Second World War in the hope that Hitler would help the Palestinians.

His claim that the pro-Nazi Haj Amin was merely attempting to “help the Palestinians” represents an extraordinary obfuscation.

As a CAMERA report (based on documentation in a book by Jennie Lebel titled “The Mufti of Jerusalem: Haj-Amin el-Husseini and National-Socialism“) makes clear, Haj Amin’s desire to ‘help the Palestinians’ was superseded by a greater passion – to annihilate the Jews.

Haj Amin El-Husseini, who was appointed Mufti of Jerusalem in 1921 aided by sympathetic British officials, advocated violent opposition to Jewish settlement in the Mandate for Palestine and incited the Arabs against the growing Jewish presence. Lebel describes the violence of 1929, where Haj Amin spread the story that the Jews planned to destroy the Dome of the Rock and the Aqsa mosque. Using falsified photos of the mosque on fire and disseminating propaganda that borrowed from the anti-Jewish forgery, the “Protocols of the Elders of Zion,” the mufti instigated a widespread pogrom against Jews in Palestine. On Aug. 23, Arabs streamed into Jerusalem and attacked Jews. Six days later, a second wave of attacks resulted in 64 dead in Hebron… 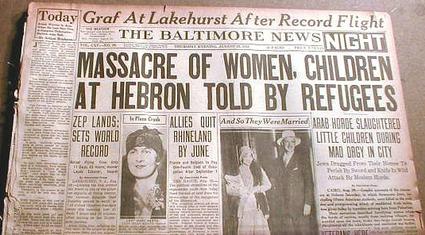 The Mufti injected a religiously based anti-Jewish component into the emerging Palestinian national consciousness….Presaging modern boycott proposals against Jewish settlement, Haj Amin called on all Muslims to boycott Jewish goods and organized an Arab strike on April 10, 1936.
…

He saw in the Nazis and Italian fascists natural allies who would do what the British were unwilling to do — purge the region of Jews and help him establish a unified Arab state throughout the Middle East…Believing that the Axis might prevail in the war, the mufti secured a commitment from both Italy and Germany to the formation of a region-wide Arab state. He also asked for permission to solve the Jewish problem by the “same method that will be applied for the solution of the Jewish problem in the Axis states.”

On Nov. 28, 1941, he met for the first time with Adolf Hitler, relaying to the German leader the Arab conviction that Germany would win the war and that this would benefit the Arab cause. 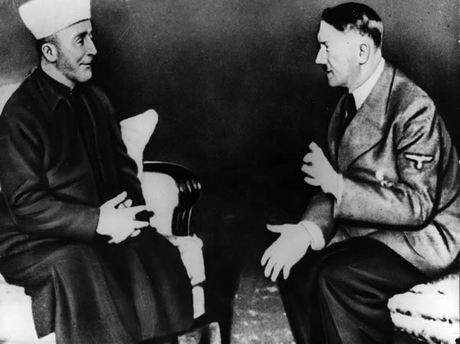 The Grand Mufti of Jerusalem, Haj Amin al-Husseini, meets Hitler in Berlin
While Hitler shared the mufti’s belief that the present war would determine the fate of the Arabs, his priority was the struggle against what he saw as Jewish-controlled Britain and the Soviet Union. Lebel reveals Hitler’s promise that when the German army reached the southern borders of the Caucasus, he would announce to the Arab world their time of liberation had come. The Germans would annihilate all Jews who lived in Arab areas.
…

[Haj Amin’s] conspiratorial view of Jewish ambitions are reflected in the widespread dissemination of such publications as “The Protocols of the Elders of Zion” and Hitler’s “Mein Kampf” in the Arab and Muslim world. The view of the Jews as contaminators of society and malevolent conspirators resonate today in the founding Charter of Hamas.

In a radio broadcast from Germany on Nov. 16, 1943…Haj Amin laid out his vision of the conflict with the Jews:

“The Jews bring the world poverty, trouble and disaster … they destroy morality in all countries… they falsify the words of the prophet, they are the bearers of anarchy and bring suffering to the world. They are like moths who eat away all the good in the countries. They prepared the war machine for Roosevelt and brought disaster to the world. They are monsters and the basis for all evil in the world ….”

As Nazi official Wilhelm Melchers testified after the war:

The mufti was an accomplished foe of the Jews and did not conceal that he would love to see all of them liquidated.

It’s clear that Haj Amin’s relationship with Hitler was no mere “alliance of convenience,” but was based on shared eliminationist anti-Semitic fantasies.  As Jeffrey Herf wrote in his 2009 book, “Nazi Propaganda for the Arab world,” the Mufti “played a central role in the cultural fusion of European with Islamic traditions of Jew-hatred [and] was one of the few who had mastered the ideological themes and nuances of fascism and Nazism, as well as the anti-Jewish elements within the Koran and its subsequent commentaries.”

Robert Fisk’s innocuous description of Haj Amin as “pro-Palestinian” is as morally perverse as characterizing Adolf Hitler as merely  “pro-Aryan.”