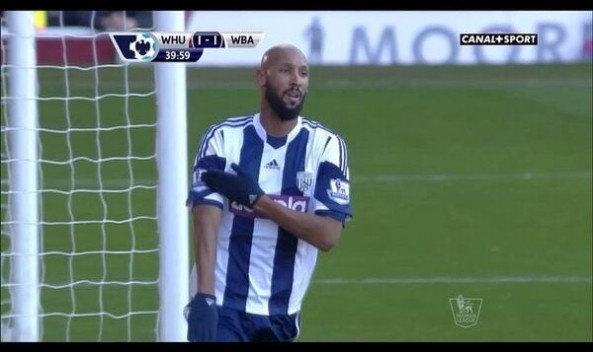 A major controversy erupted on Saturday at Upton Park in London after French Muslim footballer Nicolas Anelka used a gesture widely considered to be antisemitic and often described as “the Nazi salute in reverse.” After his first goal in the 3-3 draw at West Ham, “he celebrated with his right arm extended towards the ground, palm opened and the other one bent across his chest touching his right upper arm.”

Anelka is now under investigation by the Football Association for the gesture – which was almost certainly inspired by the gesture promoted by antisemitic French comedian Dieudonné M’bala M’bala – and was swiftly condemned by the French Sports Minister as a “shocking, disgusting” display of antisemitism.

Dieudonne M’bala M’bala is a notorious racist “comedian” who, per Hope Not Hate, “has moved towards the antisemitic fringe of French politics.” The site notes that Dieudonne has become “increasingly marginal culturally and increasingly shrill in his antisemitism, denying the Holocaust, blaming Jews for the slave trade and more generally for the oppression of the Black and Arab peoples.” Dieudonne also traveled to Iran to meet with President Mohammed Ahmadinejad, and subsequently hailed Iran as “a place where anti-Zionists can meet and communicate and develop.”

Additionally, Dieudonne had befriended the late far-right extremist Jean-Marie Le Pen, and also once invited Holocaust denier Robert Faurisson onstage at a performance, and asked the audience to applaud.

In reviewing UK newspaper coverage of the row, the Guardian naturally stands out in downplaying the episode and, more specifically, whitewashing Dieudonne’s antisemitism.

Dieudonné is a controversial figure in France, having been accused of insulting the memory of Holocaust victims. The quenelle is Dieudonné’s signature gesture, although he insists it is an anti-establishment gesture and not against Jewish people

Interestingly, other British papers were much clearer on Dieudonne’s antisemitic history, with some characterizing him as an “antisemitic comedian” or “antisemitic activist” without qualification:

His celebration was a mirror image of the gesture made popular by French, anti-Semitic comedian Dieudonne M’bala M’bala…

In the last few years, Dieudonné M’bala M’bala, his full name, has become an anti-Semitic activist and campaigner…

Dieudonne has been convicted six times in France for alleged anti-Semitic remarks. He was fined £6,000 in 2008 for describing Holocaust remembrance as ‘memorial pornography’.

Dieudonne has been prosecuted for making antisemitic comments…

Dieudonne has been convicted six times in France for alleged anti-Semitic remarks. He was fined £6,000 in 2008 for describing Holocaust remembrance as memorial pornography.

The Guardian stands alone in whitewashing the “comedian’s” clear record of anti-Jewish rhetoric – another antisemitic sin of omission at the “liberal” broadsheet which has, by now, achieved a well-earned reputation for such curious moral blind spots on the topic of racism.