The Economist Falsely Claims That Exports From Gaza Are Banned The Economist’s Middle East blog, Pomegranate, published a post on April 2 about the art scene in Gaza, titled ‘Not so bleak’, which included the following closing passages:

Hamas now keeps its hands off the enclave’s burgeoning arts scene. “In the first years it banned exhibitions,” says Mr Haj. “Now it stages its own…There’s a kind of a glasnost.” Purists in the religious-endowments ministries stayed away. But the Hamas culture minister issued a licence, offering moral but not financial support and apologising that his $10,000 budget for such projects could not cover the show.

The interior ministry did summon an artist, but only to inquire menacingly how he had managed to exhibit a painting in Israel. “I sent it by e-mail,” came the reply. Selling the originals is trickier, since exports from Gaza are still banned.

First, it should be pointed out that there is nothing prohibiting the Palestinian artist in Gaza from sending the original painting to Israel, as there is regular postal service between the two territories. Moreover, The Economist blogger’s suggestion that ‘exports from Gaza are banned’ is flatly untrue.

The following graph published by Gisha – an NGO whose mission is to “protect the freedom of movement of Palestinians, especially Gaza residents” – illustrates the number of truckloads of goods exiting Gaza for export (to the U.S., Europe and the Arab world). 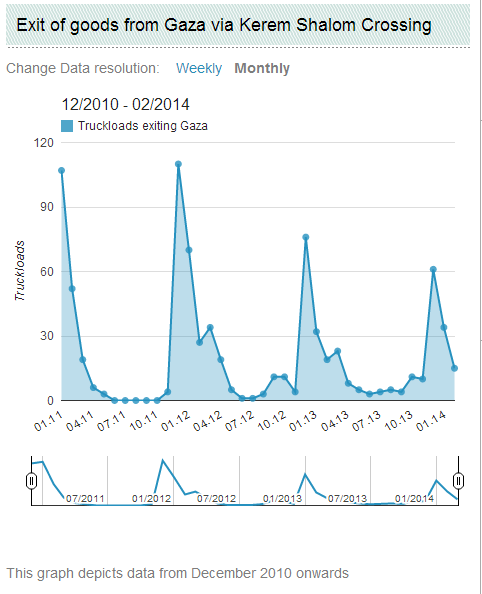 As you can see, though the quantity of trucks leaving the strip for export varies dramatically depending on the month, there is clearly no ban on exports, as The Economist seems to claim.

Additionally, according to COGAT (the Israel Coordinator of Government Activities in the Territories), from the beginning of 2012 through July 2013 over 850 tons of fruits, vegetables, flowers, and spices were exported abroad from Gaza.

In fact, it appears that there are few limits imposed by Israel on the quantity of consumer goods Gaza can export to foreign markets (outside of Israel and the West Bank), so it’s unclear how The Economist contributor – who only goes by the initials N.P. – arrived at the conclusion that ‘exports are (still) banned.’