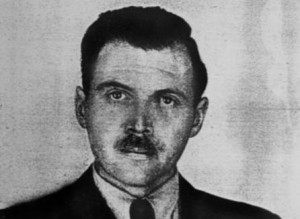 JNS.org – Seven decades after the Holocaust, Josef Mengele is still a difficult name to stomach, as the repercussions of his medical experiments echo throughout history. So when I first heard about “The German Doctor” (“Wakolda” in German), a historical drama set in early 1960s Argentina and focused on part of Mengele’s life on the run from the Mossad, I wondered: Would the film portray the Angel of Death in a sympathetic light, or would it show the man as history remembers him?

Lucía Puenzo’s film, based on her fifth novel, follows an Argentine family (mother Eva, father Enzo, and youngest child Lilith) that the fugitive Mengele—known as Helmut Gregor—takes an interest in, as Lilith’s blonde hair and blue eyes intrigue him. She is a “perfect specimen” in his eyes. They cautiously welcome him into the bed and breakfast—doubling as a family home—that belonged to Eva’s mother, and “Helmut” enmeshes himself in their lives. Enzo is working to develop a doll with a beating heart, Eva is pregnant again, and Lilith is short for her age—so the doctor gets into their good graces with financing for mass production, medication, and growth hormone injections, respectively. Meanwhile, Nora Eldoc, a photographer at a local German-language school and an undercover Mossad agent, is on Mengele’s trail.

“The German Doctor”—which was released in 2013 but didn’t hit American theaters until this April—plays out like a post-war thriller mixed with a family drama. Much like the modern remakes and re-imaginings of suspense thrillers, the film explores a rarely seen facet of Mengele’s life on the run, albeit fictionalized. But what the film doesn’t do, unlike the aforementioned remakes, is sympathize with the doctor. Mengele is the stoic scientist, focused on his experiments and not caring about the human element. He doesn’t care about the pain Lilith experiences because of the hormones, nor that he is endangering the lives of Eva’s newborn twins with his Darwinian experiment.

In the end, the story of the family is left open-ended, as they discover the truth about Mengele’s experiments. Mengele escapes and continues to elude capture for a total of 30 years, and Nora is found dead the next day, even though Mossad agents arrived as Mengele made a hasty exit via a pontoon plane prepared by friendly neighboring German expats.

Cinematically, what works about the film is the Argentine setting. The scenes are shot with a naturalistic feel, which helps to draw the audience in, and the vistas are beautiful. Snowy mountains can be seen in the distance throughout the film, and the lake nestled in the forest near the bed and breakfast serves as a sign of isolation for the family and an eventual escape for Mengele.

Historical associations, however, bog down “The German Doctor.” If it were a random German expat who took an interest in the Argentine family but didn’t experiment on its members, that expat’s actions and scientific curiosities might have been forgiven. But because that expat is casted as Mengele, his actions are unforgivable—the experiments rise to the level of small-scale atrocities, and this taints the film.

The religious background of Lilith and her family, which isn’t revealed in the film, is indeed irrelevant. The fact that they’re human matters more, and while that doesn’t fully counteract Mengele’s actions and his history, it makes the film’s plot a little more bearable.