While, of late, the Israeli-Syrian border in the Golan is relatively quiet – except for the transfer of the wounded to hospitals in Israel – the IDF is taking no chances. 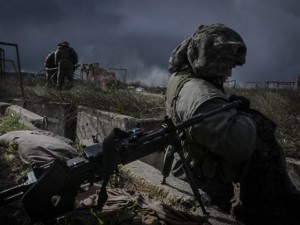 The Sunday-to-Thursday exercise was held during a lull in inter-Syrian fighting due to stormy winter weather in the area.

While IDF officials maintain that bloodthirsty terror group ISIS is not on the border now, they are preparing for such a potential scenario being readied, they believe, out of sight deeper within Syria.

“The situation is calm at the moment, but we continue to be alert and keep our eyes open,” according to battalion commander Lt.-Col Itai Dinur. “The lack of governance [in Syria] can bring us unexpected events. We see the fighting between the rebel army, the destruction and harm to civilians, and we continue to provide humanitarian aid to Syrian civilians who need medical assistance.”

The exercise, which included all of the unit’s forces in the Golan Heights, drilled for Syrian fighting on the border which involved Israel in the battle. The battalion deployed Hummer-borne intelligence gathering teams, infantry forces, intel collection and clandestine operations behind enemy lines.

“We are greatly improving fire control capabilities on the Syrian front; we work closely with them,” Dinur noted. “The Syrian sector is dynamic and changing, which requires the battalion to study the various threats it’s facing, especially from terrorist groups.”

Watch a clip of the unit in action during the maneuvers: