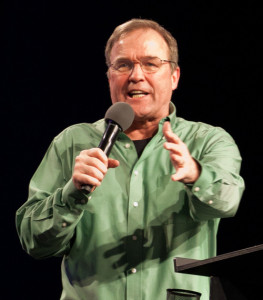 “It is profoundly troubling that Sen. Ted Cruz proudly trumpeted the endorsement of such a controversial figure who holds such offensive views,” said a statement by the National Jewish Democratic Council (NJDC).

Bickle said in 2004, “These 20 million—less than 20 million Jews worldwide, there’s about 5 million in Israel, about another 15 million worldwide, a little bit less than that—those 15 million, God is going to bring them all back. Two-thirds will die in the rage of Satan and in the judgments of God and one-third, every one of the one-third, will be in the land before it’s over and they’ll be worshippers of Jesus…The Lord says, ‘I’m going to give all 20 million of them the chance. To respond to the fisherman. And I give them grace. And I give them grace…if they don’t respond to grace, I’m going to raise up the hunters…And the most famous hunter in recent history is a man named Adolf Hitler.’”

Cruz adviser Nick Muzin said in a statement the Cruz campaign “welcomes support from faith leaders across the country. Mike Bickle is one of the hundreds who have endorsed us. My understanding is that he was paraphrasing the words of the prophets Jeremiah and Zechariah. I know that he has made support for Israel and the Jewish people a central part of his mission.”

“No one has a better record than Senator Cruz when it comes to standing with Israel, fighting against radical Islamic terror, and combating global anti-Semitism. We are proud of the support we are building in both communities and see them as complementary, and part of our larger goal of restoring Judeo-Christian leadership values to America and the world,” Muzin said, Jewish Insider reported.

The NJDC responded that Cruz must “clarify if he stands with Pastor Mike Bickle and his belief that God sent Hitler to hunt Jews for not accepting Jesus as the messiah.”