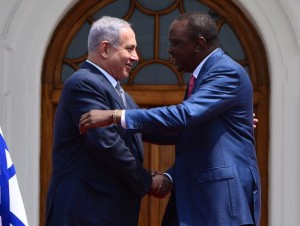 Netanyahu is currently on a four-nation tour of Africa, where he is seeking to restore and strengthen ties with the continent. Kenyatta said that Africa needs to reassess its relationship with Israel in order to better face global challenges.

The biggest challenge is terrorism “by deranged people who believe in no religion and threaten men, women and children across the globe,” Kenyatta said, the Times of Israel reported.

Netanyahu, the first sitting Israeli prime minister to visit Kenya, responded to Kenyatta’s announcement. “I think that this is significant. This will have an impact in Africa now, but I think that it will have very considerable effect regarding Israel’s international relations in the future, vis-à-vis our effort to bring about a very great number of countries that support Israel,” he said.

Four men who drove through London screaming antisemitic threats of rape and violence earlier this year have been formally charged,...

Both leaders also mentioned Kenya’s role in Operation Entebbe in 1976, in which fighter jets carrying Israeli commandos were allowed to land at the Jomo Kenyatta aiport in Kenya to refuel on their way to raid the Entebbe airport in Uganda, where a plane that was hijacked by terrorists was being held along with 260 hostages.

Netanyahu’s tour began in Uganda, where he marked the 40th anniversary of the Israeli special rescue mission in which his brother, Yonatan, was killed while trying to rescue the hostages.
Following the ceremony, the prime minister attended an African summit with seven African nations which he said brings “a monumental change in the relations between Israel and Africa.” Netanyahu will also visit Rwanda and Ethiopia during his tour this week.