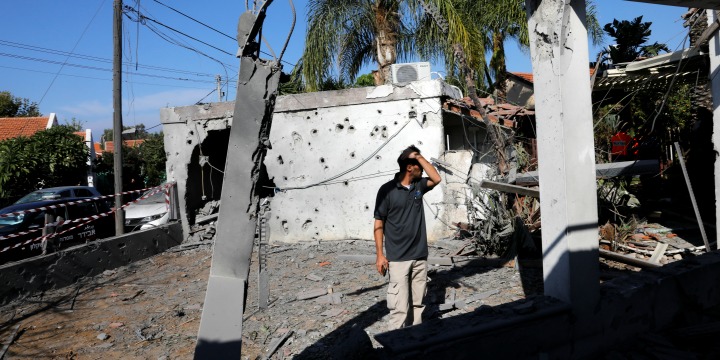 Palestinian terrorists kept up rocket fire on Israel and the IDF carried out more strikes in the Gaza Strip on Tuesday in the worst surge of violence since a 2014 war.

The fighting — which has killed six Palestinians, five of them terrorists in Gaza, and a Palestinian man in Israel since Monday — threatened to derail efforts by the United Nations, Egypt and Qatar to broker a long-term ceasefire and head off another major conflict in the Hamas-ruled coastal enclave.

Hamas and other armed Palestinian factions fired over 400 rockets or mortar bombs across the border after carrying out a surprise guided-missile attack on Monday on a bus that wounded an Israeli soldier, the IDF said.

The salvos were the fiercest since the seven-week-long Operation Protective Edge in the summer of 2014. Hamas said it was retaliating for a botched Israeli commando raid in Gaza that killed one of its commanders and six other gunmen on Sunday. An Israeli colonel was also killed in that incident.

In Gaza City, people gathered in front of a large mound of debris that was once a multi-floor structure. It was flanked by five-story buildings still standing after the air strike, their shattered stone facades adding to the tall pile of rubble.

In the southern Israeli coastal city of Ashkelon, a video shot by a resident showed a bleeding woman, lying in the debris of an apartment and covered by dust, weakly raising her arm. She was taken to hospital in critical condition.

The body of a man, killed when a rocket hit the home, was next to her. He was identified by Israeli officials as a Palestinian from Halhoul, in the West Bank. Israel Radio said he had a permit to work in Israel.

Israeli Prime Minister Benjamin Netanyahu, who said on Sunday he hoped to avoid another Gaza war and reach an “arrangement” that would also ease Palestinian economic hardship, convened his security cabinet to discuss Israel‘s next moves.

A Palestinian official said Egypt and the United Nations had stepped up efforts to end the current round of fighting. Since the 2014 war, both Hamas and Israel have pulled back after brief bouts of fighting from another large-scale conflict.

“The (Palestinian factions) agreed to hold fire to give Egyptian efforts to end Israeli aggression a chance, but the factions will respond to every Israeli attack,” the official said.

There was no word from the security cabinet session whether Israel would agree, and rocket attacks continued amid Israeli air strikes as the forum met.

Israel responded with dozens of air strikes, hitting buildings overnight that included a Hamas intelligence compound and the studios of Hamas’s Al-Aqsa TV, whose employees had received advance warnings from the military to evacuate.

In aerial attacks on Tuesday, Israel‘s military said it took out a rocket-launching squad and fired at several Palestinians infiltrating through the border fence around Gaza.

A statement issued by terrorist groups in Gaza said Ashdod, a major Israeli port just north of Ashkelon, and Beersheba, the biggest city in southern Israel, would be hit next if Israel didn’t cease fire.

Abdallah Abu Habboush, 22, said he was awakened by shouts from neighbors to get out of his residential building after what Israel terms the “tap on the roof” warning. They all gathered in a room on the first floor to wait out the attack.

“Old men who were with us fainted because of the smoke,” he said, adding that he had no idea why the structure was hit. The IDF said all of the buildings targeted were “owned, operated and used by Hamas”.

Egypt, which borders Gaza to the south, urged Israel to back down. The United States condemned Hamas.

Hamas, a designated terrorist group in the West, and Israel have fought three wars since the Islamist movement took control in Gaza in 2007, two years after Israel withdrew settlers and soldiers from the territory.