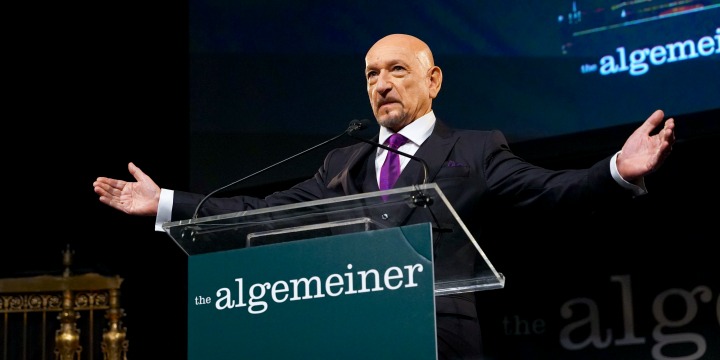 The event, held at Gotham Hall, was attended by some 500 people, who gathered in support of The Algemeiner.

Both Kingsley and Riley received The Algemeiner’s prestigious “Warrior for Truth” award, and the 2019 Algemeiner Honoree was entrepreneur and philanthropist Michael David Heller.

The evening’s Master of Ceremonies was CNN journalist Bianna Golodryga, and the Event Chairs were Robert H. and Amy Book, and Neil and Sharon Book. Bernard-Henri Lévy served as Honorary Chairman, and News 12 anchor Emily Lorsch hosted the red carpet.

The crowd was roused by the speech of New York University student leader Ben Newhouse, who recalled his efforts to fight the Israel boycott movement on campus.

In his address on Thursday, Algemeiner Editor-in-Chief Dovid Efune remarked, “How does the tragic saga of antisemitism end? Who can say? What we do know is that we are called on today to write our chapter in the story. And we are determined that it shall never be said that under our watch the beast of antisemitism reawakened and that it did so unopposed, or that it was only met with mild resistance.”