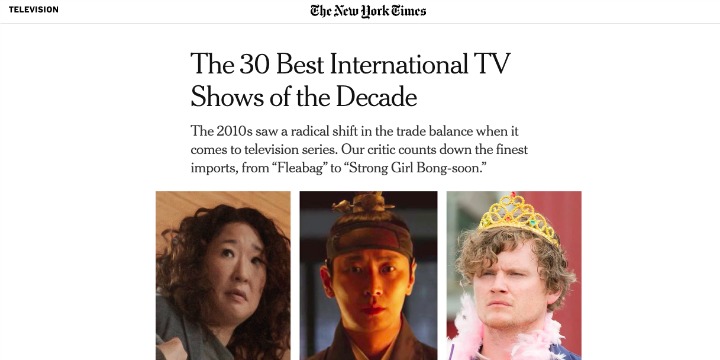 The New York Times’ list of the 30 best international TV shows of the decade. Photo: Screenshot.

JNS.org – The Israeli television show “Prisoners of War,” known as “Hatufim” in Hebrew, was ranked No. 1 on The New York Times list of the 30 best international TV shows of the decade.

The show, which was remade in the United States in 2011 as “Homeland,” was described by the publication as “tense but in a quiet, leisurely, realistic style; a taut and intelligent political thriller that was above all a melancholy, at times heartbreaking character study of soldiers and families damaged by war.”

The show began airing in Israel in March 2010 and is available with English subtitles on Hulu.

The popular Israeli television series “Fauda” was also on the list at No. 8. The show, which is entering its third season in Israel, was described as an “absorbing, straightforward thriller” that “shrewdly exploits the exigencies and emotions of the Israel-Palestinian conflict and its dusty, mazelike locales.”

Other shows on the list included “Killing Eve,” “Sherlock,” “The Crown,” “Chewing Gum” and “Unforgotten.”

A list of “Honorable Mentions” includes the Israeli shows “Our Boys” and “Shtisel.”