As Trump Gets Set to Roll Out His Peace Plan, Israelis Debate Timing 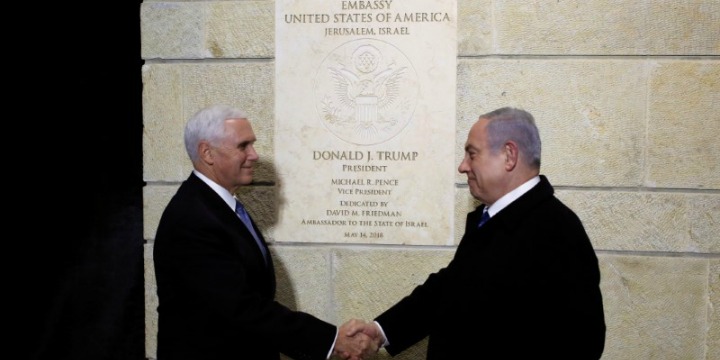 JNS.org – In an unprecedented political move, both Israeli Prime Minister Benjamin Netanyahu and his main political challenger Benny Gantz are traveling to Washington to meet separately with US President Donald Trump just prior to the rollout of the administration’s long-awaited Middle East peace proposal.

US Vice President Mike Pence invited Netanyahu to the White House at a meeting between the two at the US Embassy in Jerusalem last week, and said that on the recommendation of the prime minister the invitation was being extended to Gantz as well.

Netanyahu published a video stating that he is traveling to Washington with “a great sense of mission and great responsibility.” He called Trump’s plan Israel’s “greatest opportunity,” and added that “for three years, I have been discussing our most critical security needs, which must be part of any political settlement, with President Trump and his staff.”

Gantz referred to Trump’s plan as “a meaningful milestone … to move toward a regional, historic deal,” and said that Trump is “a true friend to Israel, to Israelis and to American Jews.” He emphasized that he too was involved in the development of Trump’s plan, through meetings with members of the president’s staff.

To date, the precise details of the plan remain known to only a handful of high-level officials, but the plan is widely believed to be much more favorable to Israel than previous peace formulations. Recent media reports have claimed that the plan will enable Israel to annex as much as 40 percent of Judea and Samaria, including the Jordan Valley.

While the details of any peace proposal are likely to be considered controversial, in this case the timing of the plan’s release is also coming under intense scrutiny. The Trump administration has been holding back the release of the plan for over a year due to Israel’s electoral instability, and has been growing frustrated with Israel’s inability to form a government.

Now, in an apparent pivot, Netanyahu believes that he stands to benefit from the release of the plan just five weeks away from a third consecutive national election in less than 12 months, as do his political opponents. Similarly, many assert that Trump, who is known to have a good relationship with Netanyahu, is happy to assist his ally in his bid to remain in power.

“It is quite fascinating how some in Israel don’t have a problem with US intervention with the Israeli election when it suits their political agenda,” Shapiro told JNS.

Shapiro, who served during the Obama administration and continues to live in Israel, said that the Trump plan represents a major shift from previous peace proposals, and “veers away from the model of two states for two people in a negotiated settlement.”

Shapiro warned Israelis that “the US president will not always be Republican. Whether it’s next year or in five years, there is a high likelihood that the Democrats will take control of the White House,” while adding that “even if Israel accepts this plan now, it could very well be turned back by the US and that reality should not be ignored by the Israeli side.”

Yet, former Israeli Ambassador to the United States Michael Oren said that Israelis should not get caught up in the timing of the plan’s release, and that Israel should take advantage of the short historical window in which Israel has to work with the Trump administration.

“It’s the best deal Israel will ever get from the friendliest administration we’ve ever known,” Oren told JNS. “Israel must say yes.”

Within Israel, Knesset members within Netanyahu’s Likud Party have remained mostly silent over the sudden announcement of the plan’s imminent release, leaving commentary to his political opponents.

MK Ofer Shelah from Gantz’s Blue and White Party told JNS that “any plans which Netanyahu endorses or seeks to move forward with during the next five weeks are not real and are simply election-related plots. They are not to be taken seriously.”

However, Blue and White No. 2 MK Yair Lapid told Israel’s Army Radio that the Trump plan will be discussed with seriousness after the March election. He said that from what he has seen, the plan is “very good for Israel” and that “anyone who is not an extreme leftist or rightist will understand that.”

MK Oded Forer of Avigdor Lieberman’s Yisrael Beiteinu party told JNS that “Trump’s plan has not been made public at all and no one knows that truly appears there. Therefore, to debate the plan five weeks before the election makes it political and this is a mistake.”

However, Forer said that Netanyahu should immediately act to declare Israeli sovereignty in the Jordan Valley, which is believed to be one of the points of the Trump administration’s proposal. “There is an opportunity now to apply Israeli rule to the Jordan Valley as the prime minister has promised to do, so it would be better for him to fulfill his promise instead of trying to spread a smokescreen of spin,” said Forer.

Efrat Mayor Oded Revivi, a member of the Likud, meanwhile said that the unveiling of the plan prior to the March 2 election represents “an opportunity” for Israel’s electorate, and criticized those against the plan’s pre-election rollout.

Revivi told JNS that with the release of the plan ahead of the election, each party will have the opportunity to “assess the plan and offer their response. Then the public will give its answer when it votes in six weeks. This will give the Israeli public a say, which is critical for the success of any peace plan.”

The mayor of one of Israel’s largest settlement communities, Revivi said that the proposal represents a shift from peace plans based upon the Oslo paradigm, which he said was outdated. He added that opponents of the plan’s release “are just fearful that the major parties will embrace so many aspects of the Trump vision,” which are a departure “from the failed thinking of the last decades.”

Unlike previous administrations that pushed for Israel to withdraw from the disputed territories to facilitate the creation of a Palestinian state, Revivi said that “this is an administration that understands that the Israeli-Palestinian conflict existed long before Israelis were able to live in Judea and Samaria.”

Israeli politicians and citizens now wait for the full details of the plan, which will most certainly ignite even more debate in Israel both about both its timing and its content.