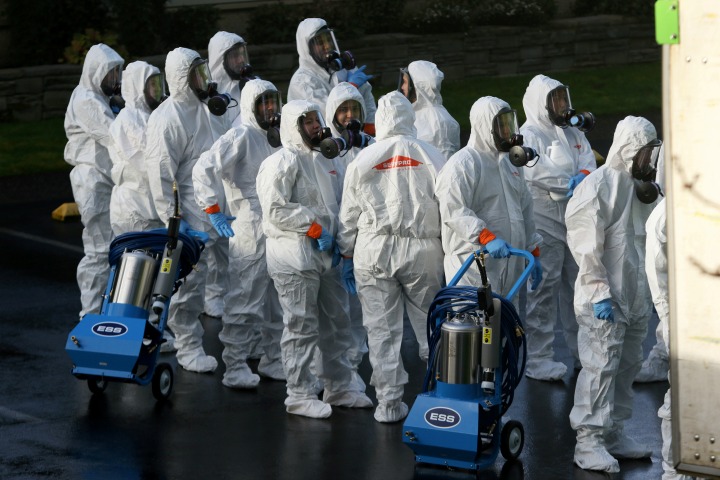 Members of a cleanup crew wearing hazardous material suits prepare to enter a Seattle-area nursing home at the epicenter of one of the biggest coronavirus outbreaks in the US, in Kirkland, Washington, March 11, 2020. Photo: Reuters / Jason Redmond.

President Donald Trump ordered the suspension of European travel to the United States for 30 days to help curb the spread of a coronavirus pandemic that has disrupted nearly all corners of US daily life, from education to sports and entertainment.

Trump, whose administration has come under sharp criticism for its response to the public health crisis, also announced several steps aimed at blunting economic fallout posed by coronavirus.

“We are marshaling the full power of the federal government and the private sector to protect the American people,” Trump said in a prime-time televised address from the Oval Office. “This is the most aggressive and comprehensive effort to confront a foreign virus in modern history.”

Trump, whose re-election bid on Nov. 3 could hinge on how well he responds to the crisis, stopped short of declaring a national emergency as the number of coronavirus infections continued to mount.

The greater Seattle area is the epicenter of the deadliest, and one of the largest, clusters of coronavirus infections in the United States, accounting for the bulk of at least 37 people killed in the country by the highly contagious respiratory illness, also known as COVID-19.

The outbreak took a major toll on US sports as the National Basketball Association said it was suspending the season until further notice after a Utah Jazz player tested positive for the coronavirus.

Late-night television was taking a hit as well, with at least two shows produced in New York City – NBC‘s “The Tonight Show with Jimmy Fallon” and CBS‘ “The Late Show with Stephen Colbert” – planning to begin taping without a live studio audience for the first time, Hollywood trade publication Variety reported.

The outbreak even touched one of Hollywood’s most beloved stars, as Oscar-winning actor Tom Hanks announced on Twitter that he and his wife, Rita Wilson, had tested positive for coronavirus in Australia, where he was on a film shoot.

Extending US travel restrictions he imposed last month on airline flights from China, Trump said all travel from Europe to the United States would be suspended for 30 days, effective at midnight on Friday, though he exempted the United Kingdom.

Coronavirus outbreaks have flared in several European nations, especially in Italy, whose government has imposed a virtual lockdown of the entire country.

Seeking to stem the financial and economic impact of the pandemic, which has sent stocks plunging over the past week, Trump announced he was taking several steps, such as instructing the Treasury Department to defer tax payments without interest or penalties for certain business and individuals hit by the health crisis.

The president also said he would take emergency action to provide financial relief for workers who are ill, quarantined or caring for others due to coronavirus. And he said he was directing the Small Business Administration to provide capital and liquidity to firms affected coronavirus, including low-interest loans.

Wall Street stocks plunged because of uncertainties surrounding the coronavirus, with the Dow Jones Industrial Average confirming a bear market for the first time in over a decade.

The market concern was compounded by a Reuters report that the White House had ordered federal health officials to treat top-level coronavirus meetings as classified.

S&P 500 e-mini futures slid as the president spoke. They were last down 3.7%, signaling another day of losses awaits Wall Street.

In Washington state, Seattle Public Schools announced the cancellation of all classes and other activities, including childcare and athletics, for at least two weeks starting on Thursday in a measure designed to “disrupt widespread infection” by the coronavirus.

The closure, idling some 53,000 students, is believed to mark the first US big-city school district to halt instruction due to the coronavirus.

Washington state has documented 366 coronavirus cases, including 29 deaths, most of them concentrated in the Seattle area around a long-term care facility in the suburb of Kirkland. There were 1,281 cases in total in the United States, according to a Johns Hopkins University tally.

The World Health Organization described the coronavirus, which emerged late last year in China, as a pandemic on Wednesday for the first time.

Social and public routines have seen widespread disruptions in the United States for weeks, with concerts and conferences canceled and universities closing their campuses as they shift to online instruction.

Public gatherings have been suspended in a coronavirus “hot zone” in New Rochelle, a New York City suburb.

Democratic presidential contenders Joe Biden and Bernie Sanders were reassessing how to campaign in the face of the spreading outbreak.