U.S. President Joe Biden signs the American Rescue Plan, a package of economic relief measures to respond to the impact of the coronavirus disease (COVID-19) pandemic, inside the Oval Office at the White House in Washington, U.S., March 11, 2021. Reuters/Tom Brenner

The Biden administration’s decision to resume US financial assistance to the Palestinians has been covered extensively by major media outlets. Yet, news organizations such as The New York Times, CNN and The Los Angeles Times have, to date, failed to raise questions about whether this funding plan is actually being diverted in part by the Palestinian Authority (PA) to incentivize violence against Israeli citizens.

On April 7, the US State Department announced its intention to send $75 million in economic and development assistance for programs in the West Bank and Gaza Strip, $10 million for peace-building initiatives to the Palestinians through the US Agency for International Development (USAID), and $150 million to the United Nations Relief and Works Agency (UNRWA). In addition, security-related funds have been earmarked for the West Bank.

This funding is in addition to the $15 million in humanitarian assistance to address the COVID-19 pandemic and food insecurity that the United States announced in March.

This fundamental shift in Washington’s policy was depicted as a positive development in an April 9 Los Angeles Times piece by the publication’s editorial board.

Meanwhile, The New York Times found it fit to focus on the fraction of funds intended to help the Palestinians combat the coronavirus. This, in an article ostensibly about the White House’s call for $10 billion to be allocated to global health programs:

The spending plans also make clear that the Biden administration wants to work with Palestinian leaders on a long-term peace plan with Israel — another departure from the Trump administration, which engaged almost entirely with Israel.

Readers of these major news outlets were kept in the dark about a brewing controversy regarding the prospective distribution of aid. Namely, that the renewed funding to the Palestinians might very well violate US law.

Named for an American citizen murdered in a 2016 Palestinian terror attack in Tel Aviv, the Taylor Force Act was passed in 2018 with strong bipartisan support, with the stated purpose of halting US funding to the Palestinian Authority so long as Ramallah continues paying stipends to terrorists and their families.

Meanwhile, to its credit, The Associated Press referred to the Taylor Force Act in its coverage. However, its widely published piece, as well as others related to Washington’s reactivating aid to the Palestinians, have effectively buried the most important aspect of the story — the existence of a Palestinian law requiring that seven percent of the PA’s annual budget be paid to a “Martyrs Fund.”

The Palestinian Budget Book states that payments must be made to killed or imprisoned Palestinian terrorists and their families from the Martyrs Fund because the recipients constitute a “fighting sector.” Notably, the amount paid increases in proportion to the severity of the crime.

While every public record of the law was removed in 2018, Knesset Foreign Affairs and Defense Committee chairman Avi Dichter, who is fluent in Arabic, has confirmed the existence of a Martyrs Fund.

In the case of what is sometimes referred to as pay-for-slay, the relevant legislation is the PA’s “Amended Palestinian Prisoners Law No. 19” (2004).

PA President Mahmoud Abbas has admitted that the PA pays terrorists: “Since 1965, we have been paying them and their families… If we had only 20 to 30 million shekels, which is the monthly sum paid for the families of the martyrs, we would still pay it to them.”

Abbas has also been quoted as saying that “martyrs” and prisoners are like “stars in the sky of the Palestinian national struggle, and they have preference in everything.”

Israel’s presumptive peace partner similarly is on record welcoming “…every drop of blood spilled in Jerusalem. This is pure blood, clean blood, blood on its way to Allah. With the help of Allah, every Shaheed [martyr] will be in heaven, and every wounded will get his reward.”

And there is a paper trail.

Marwan Barghouti, convicted of terror attacks that killed five people and accused of orchestrating dozens of other shootings and suicide bombings, is evidently on Ramallah’s payroll: 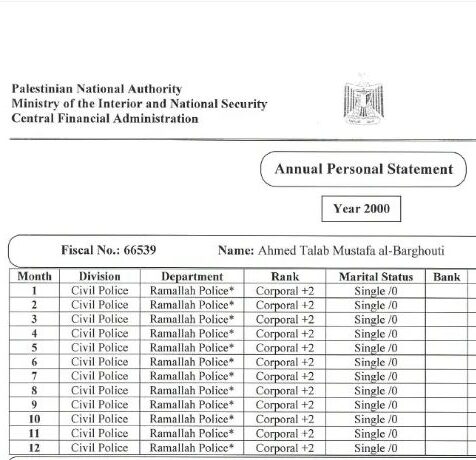 Yet, in CNN’s report on the reinstatement of hundreds of millions of dollars in funding to the Palestinians, similar to the stories in The New York Times and Los Angeles Times, the Martyrs Fund is not even mentioned. Instead, the CNN piece merely describes Palestinian Authority Prime Minister Mohammed Shtayyeh as welcoming the US policy switch, expressing the hope it “could lead to renewed US efforts to try to resolve the conflict.”

News organizations’ apparent inability to effectively cover this story is supported by data.

Between April 7, the date of the White House announcement, and April 12, HonestReporting reviewed 79 articles produced on this topic by major media outlets (CNN, The New York Times, The Washington Post, The Los Angeles Times, MSN, MSNBC, NBC, and ABC). Only one of these stories mentions the Taylor Force Act, while a mere four items specifically explore the question of whether the White House may be violating US law.

In addition, just nine of the 79 stories make any reference to Palestinian terrorism.

The likelihood that this funding will help the Palestinian people live better lives, in a more democratic society, should be a matter of robust public debate. Instead, it appears that influential news organizations are opting to uncritically relay the Palestinian Authority’s response to the White House’s largesse:

The office of Palestinian President Mahmoud Abbas said in a statement that it “renewed its commitment to the two-state solution based on the foundations of international legitimacy, and its willingness to respond to any international efforts to reach this goal.”

The media have a profound responsibility to paint a full picture of every situation, given that in free societies, the press help shape public opinion. For example, it was American journalist Nicholas Kristof who drew massive attention to the genocide in Darfur in the early 2000s. And then there is the role of the media in the perception of the Vietnam War. Intense levels of news coverage correlated with shifts in public opinion regarding these conflicts.

Are today’s major news organizations up to the challenge of reporting the facts, providing crucial context, and questioning prevailing narratives?

The answers should be yes, yes, and yes when it comes to the Israeli-Palestinian conflict. The reality, however, is far different.

The author is a contributor to HonestReporting, where a version of this article first appeared.