Israeli firefighters work around burnt bus and car, after they were hit by a rocket fired by the Palestinian Islamist movement Hamas from Gaza towards Israel amid the escalating flare-up of Israeli-Palestinian violence.

Palestinian terror groups in the Hamas-ruled Gaza Strip have made good on their threat to turn southern Israel, in particular, “into hell,” by firing hundreds of rockets and mortar shells at the Jewish state earlier this week. Dozens of these were intercepted by the Iron Dome missile defense system, whose batteries successfully downed more than 90 percent of the projectiles that were headed toward populated areas.

Yet, while each and every launch constituted a war crime, The New York Times, BBC, Washington Post and other news organizations attempted to draw a moral equivalency between Iranian-backed Hamas and Islamic Jihad — both designated as terrorist organizations by the United States and other Western countries — and the Middle East’s only democracy: Israel.

The media all-too-often attempts to obfuscate what should be clear moral distinctions between annihilationist Palestinian terrorist organizations and the Jewish state, by confusing the root causes of outbreaks of violence and their resulting effects. 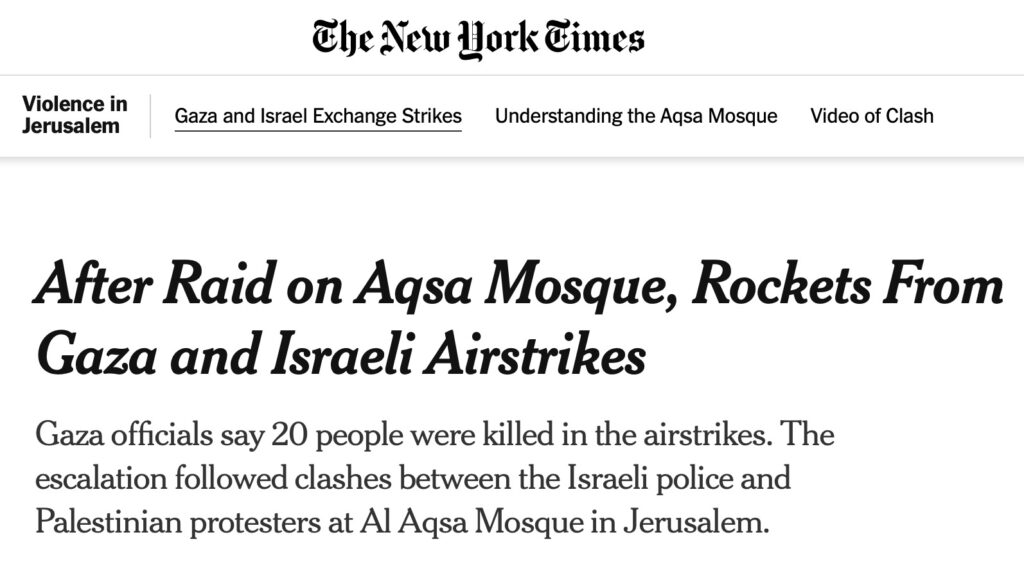 Consider the headline above produced by The New York Times. To begin with, it effectively blames a fully decontextualized Israeli “raid” on a Muslim holy site for the ensuing military escalation. In reality,  Palestinians had — for days on end — been rioting in the eastern part of Jerusalem, including atop the Temple Mount, clashing with police who were attacked with, for example, rocks and firecrackers that were stashed inside the mosque itself.

Notably, The New York Times repeatedly refers to such wanton violence as “protests.”

Moreover, the headline does not make clear that rocket fire from Gaza prompted Israel to respond with airstrikes. Additionally, by including in the title a mention of the “raid” on Al-Aqsa, the Times is suggesting that Israel’s weeks-long defensive actions to thwart Palestinian violence was the mitigating factor in Hamas’ decision to open fire.

This is merely a reiteration of the terrorist group’s own claims. “Tampering with Jerusalem will burn the heads of the occupiers,” Saleh al-Arouri, a senior Hamas official, had said.

As such, The New York Times is, in practice, serving as a mouthpiece for a terrorist group that in the past month, repeatedly launched projectiles at the Jewish state and that had long been threatening to attack Israel due to ‘provocations’ in Jerusalem.

Furthermore, the Times seemingly tries to cement its false narrative by including tabs above the story leading to “explainers” — that is, hit pieces about Israel — about “Violence in Jerusalem” and “Understanding the Aqsa Mosque.”

For its part, The Washington Post in its coverage of the story attempted a similar linguistic sleight.

Its article references Hamas six times, but not once is the word “terrorist” included in the same sentence as a modifier.

In fact, “terrorist” appears only once in the entire piece within a quote by an Israeli official; this, in the final paragraph of the article. And while the term “militant” does appear twice, it is used broadly to describe various groups that operate inside Gaza, and not specifically Hamas.

The Post then goes one step further by seemingly connecting the Gaza rocket fire to a small fringe group of young Jewish extremists who took part in the May 10 Jerusalem Day parade — which, mind you, authorities had canceled amid the unrest before reversing their decision after Hamas launched rockets at the holy city:

The sight of Muslims protesting at the mosque, which was built on the Temple Mount — the holiest site in Judaism — also inflamed the passions of far-right Jewish nationalists who want to see a third Jewish temple built on the ruins of the mosque. “

Over the years, Jews harboring controversial views have participated in the annual event commemorating Israel’s reunification of Jerusalem in the aftermath of the 1967 Six-Day War. However, those who have hurled racist slurs or perpetrated acts of violence against Palestinians have been held to account by Israeli security forces and condemned by Israeli politicians.

The same cannot be said of officials in Ramallah, who not only hail terrorists, but provide them and their families with monthly stipends as part of the Palestinians’ “Pay-for-Slay” policy.

Additionally, news organizations such as the BBC seemingly construe the tragic deaths of a number of Palestinian youths in Gaza as evidence that Israel simply bombs away without taking precautions.

But the truth is that the IDF goes to great lengths to limit Palestinian casualties, including by at times putting its soldiers in harm’s way; and in other instances, providing advanced warning of impending strikes so that civilians can evacuate — even though this means that terrorists might simultaneously escape.

Unfortunately, civilians are still liable to get hurt in every war, and more so in Gaza, given that Hamas deliberately operates within densely populated urban areas.

But none of that seems to matter, and readers are generally fed misleading details such as this:

Israeli air strikes against militant targets in Gaza have killed up to 20 people, including children.

Or, there is this headline from The Telegraph (UK):

Another point: Many Gazans reported killed in conflicts between Hamas and Israel have later been identified as terrorists. This is because media outlets often unquestionably recycle statistics from the Hamas-run Health Ministry.

For example, the Health Ministry in Gaza claimed that between Monday night and Tuesday morning, at least 24 people were killed. Yet, the IDF contended that at least 15 of those were members of terror groups. Finally, some of the deceased were reportedly hit by errant Hamas or Islamic Jihad rockets that landed in the Palestinian coastal enclave.

By Equating Israel With Hamas, The New York Times, Washington Post, and BBC Are Playing With Fire

By not reporting certain facts while distracting readers with extraneous information — this, apparently, with a view towards perpetuating anti-Israel narratives — some of the world’s largest news organizations are engaging in a form of moral relativism that is making it increasingly difficult to identify and subsequently hold human rights violators to account.

Such agenda-driven journalism not only does a great disservice to people who rely on The New York Times, Washington Post, BBC and other news outlets for accurate stories. Even worse, it guarantees that Palestinians living under Hamas’ iron fist will continue to suffer so long as the terrorist group’s war crimes against Israel are minimized.

Gidon Ben-Zvi is an Israeli-based writer, and a contributor to HonestReporting, where a version of this article first appeared.