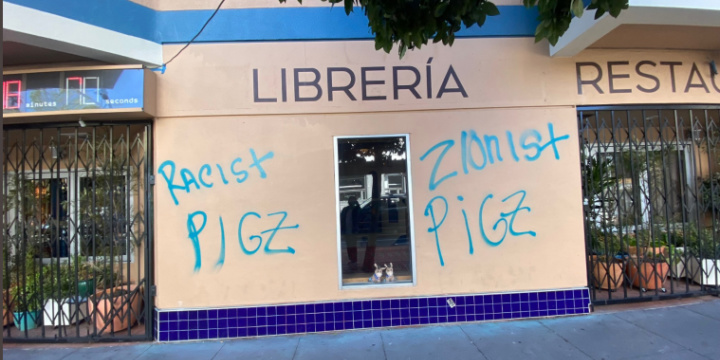 A popular, Jewish-owned cafe in San Francisco’s Mission District was vandalized Sunday night with antisemitic graffiti, amid a rise in hate crimes in the city and a national spike in attacks on Jews.

“Targeting Jewish businesses is straight up antisemitic. We must speak out & condemn this hate,” responded California State Senator Scott Wiener on Twitter.

After being targeted in 2019 with protests and antisemitic graffiti, Yekutiel penned an op-ed in San Francisco Chronicle, describing himself as a “proud” religious and liberal Jew whose family had found refuge in Israel after facing persecution in Afghanistan. He said that while he was not uncritical of Israeli government policies, the Israeli-Palestinian conflict called for “high-quality discourse,” not bigotry.

“The far-right has attacked the business and me when they’ve disapproved of a guest speaker. The alt-left has pushed vitriolic lies and hatred on social media. Claims such as the space is a Zionist takeover of the Mission has emboldened people to walk in off the street and demand to know if the owner is Jewish,” he wrote.

Rabbi Gedalia Potash of the nearby Chabad of Noe Valley — where, on May 14, graffiti messages of “Death to Israil” were found on the gates of the center’s preschool — spoke of Yekutiel as an advocate for “civil rights and equality for all.”

Potash told The Algemeiner that the Chabad Center and Manny’s are both “neighborhood establishments … trying to enhance community and bring people together and help people live peacefully and joyfully. And these people are just trying to disrupt any sense of harmony in the community.”

“Vandalism and hate will not intimidate us,” he said. “We will continue to be a source of tolerance and peace in the in the community.”