Al-Haq Report Details How Women Are Mistreated in Palestinian Territories A Palestinian woman puts her hand on her head after returning to her destroyed house following Israel-Hamas truce, in Beit Hanoun in the northern Gaza Strip, May 21, 2021. Photo: REUTERS/Mohammed Salem

Palestinian human rights group Al-Haq issued a report in 2018 about how poorly the Palestinian governments were following the Convention on the Elimination of All Forms of Discrimination Against Women (CEDAW.)

The first few pages blame Israel as the primary reason Palestinian women are discriminated against, which is what one expects from any and every human rights report that comes out from Palestinian organizations.

But finally, in paragraph 10, we see that Al-Haq accuses Mahmoud Abbas of pretty much being a dictator, without saying it directly:

The on-going internal Palestinian political divide has had adverse consequences on the human rights situation. With the PLC ceasing to function, the executive branch of government has monopolised both legislative and executive functions. Transparency and public dialogue are largely absent in the law and policy-making processes. The justice system is also compromised by executive interference, leading to an absence of accountability and redress for victims. The executive has further placed increasing restrictions on civil society organisations, (CSO) such as restrictions on financial transactions, including where the salaries of CSO employees are only transferred following the approval of the Ministry of Interior. These restrictions are imposed without any legal basis.

Then it goes into detail on the misogynist laws and practices of the Palestinian Authority, and how it has made practically no progress in adhering to the convention that it signed — a point I have made in the past.

In matters relating to marriage and family relations, the provisions of the 1976 Personal Status Law effective in the West Bank, and the 1954 Family Rights Law in force in the Gaza Strip, are discriminatory against women and girls. These laws need to be amended and brought in line with CEDAW. Discriminatory provisions particularly affect marriage, divorce, eligibility to choose a husband, polygamy, guardianship, custodianship, adoption, inheritance, child support, common properties, and testimony.

Al-Haq doesn’t go into detail, but in all of these areas, women are explicitly given fewer rights than men, or no rights whatsoever. I once summarized it. And here are some details: 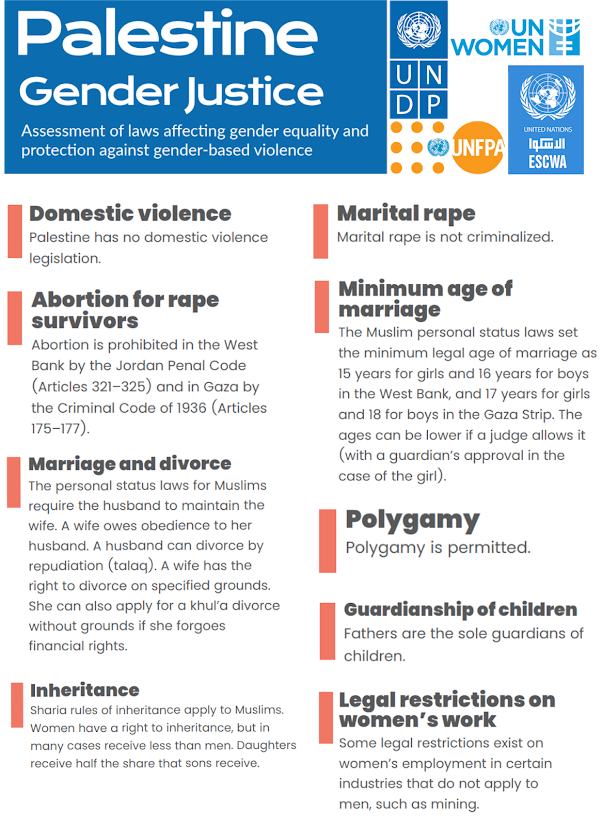 Mahmoud Al-Habbash, Chief Justice in the Sharia Courts and Advisor to the President for Religious Affairs [said] the Islamic Sharia takes precedence over international conventions. Al-Habbash affirmed that he would not accept or apply any amendments to relevant laws that contradict the Islamic Sharia, he further asserted that this would not  be accepted by the Palestinian President, the PLC, and the Palestinian people.

The Palestinian Penal Law also does not criminalize marital rape. These stories of systemic oppression are always ignored or buried by the media. Far more often, one sees Israel blamed for Palestinian misogyny.
The opinions presented by Algemeiner bloggers are solely theirs and do not represent those of The Algemeiner, its publishers or editors. If you would like to share your views with a blog post on The Algemeiner, please be in touch through our Contact page.