Since its formation in 1995, the Palestinian Authority (PA) has created the most comprehensive system for funding, incentivizing, and rewarding terror and terrorism.

As part of the policy that has been dubbed the PA’s “Pay-for-Slay” system, the PA has paid billions of shekels/dollars/euros to terrorists and their families. According to Atef Abd Al-Gawad, an Egyptian journalist based in Washington, it is the PA’s terror reward program that is impeding the reopening of the office of the Palestine Liberation Organization (PLO) in Washington.

Ignoring the fundamental demand that the PA must entirely desist from its terror reward payments, according to Al-Gawad “the entire issue is semantics” and all the PA needs to do to deceive the US, is re-name the payments as social security payments:

The legal problem is that the American Congress is conditioning the reopening of the PLO office in Washington on the PA ending the [payments of] salaries to the young Palestinians who are carrying out suicide attacks – in Palestine they are called Martyrdom-seeking [operations]. These are the kinds of legal obstacles that are preventing [US President] Biden from reopening the office… The responsibility is laid on the Palestinians. The responsibility that these salaries won’t be paid as “salaries” for Martyrs, but rather as compensation from the [PA] Social Insurance to the mothers and families of these fallen who are the young Palestinians. The entire issue is semantics.

While some PA officials have previously attempted to explain the terror payments as “social welfare,” the unequivocal fact is that the payments have nothing whatsoever to do with social welfare.

First and foremost, the payments have no need-based criteria. The family of a dead terrorist receives a monthly payment that currently stands at 1,400 shekels ($432) per month, irrespective of the needs of the family. 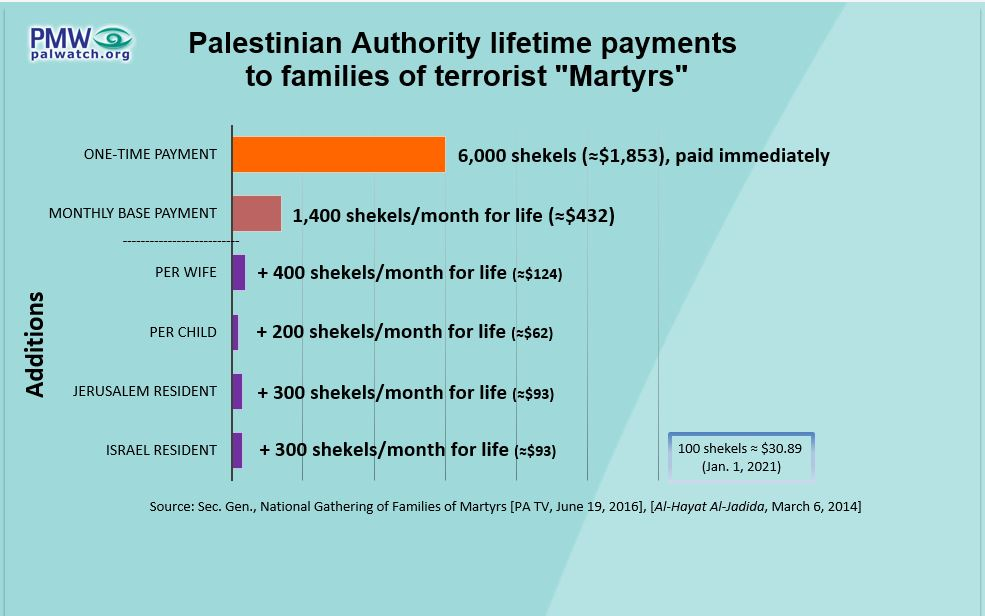 In as much as the sentiments of Al-Gawad represent the thoughts of PA officials or other relevant parties, it would appear that much is being “lost in translation.” While Israel and the US are demanding a complete abolition of the “Pay-for-Slay” policy, the Palestinians appear to think that they can continue funding, incentivizing, and rewarding terror and terrorists, and all they need to do to deceive the US is make semantic changes in the name of the payments.

It is unclear why Al-Gawad links the opening of the PLO offices in Washington to the PA’s terror payments. The PLO offices were closed in 2018, after the State Department concluded that the “PLO had failed to use its Washington office to engage in direct and meaningful negotiations on achieving a comprehensive peace settlement and, therefore, closing the PLO’s Washington office would serve the foreign policy interests of the United States,” according to the legal opinion of the US State Department.

This article was originally published at Palestinian Media Watch (PMW), where the author is the Head of Legal Strategies.