The BDS movement doesn’t only boycott Israel. It also boycotts the Dubai Expo.

Yesterday, it issued a statement condemning the Palestinian Authority for opening up a pavilion at the Expo.

The BDS argument looks even more ridiculous given that there are pavilions from Egypt, Iraq, Jordan, Libya, Pakistan, Oman, Qatar, Saudi Arabia, Tunisia — and even Iran and Syria.

The reasons that BDS gives for boycotting the Expo include this beauty: 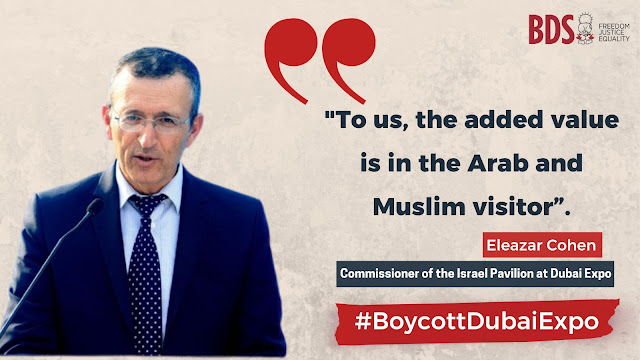 There you have it. The reason the Expo must be boycotted is because otherwise, Arabs might actually have the opportunity to meet and speak with Israelis — and that is something that BDS cannot condone.

After all, they might find out that Jews are human beings and not evil apes and pigs.

BDS supporters are also ludicrously claiming that Israel will be marketing military technology used to kill Palestinians at the Expo. (They made this claim before Israel even opened its booth.)

The effort to boycott normalization efforts at the Dubai Expo makes BDS look more and more absurd. The more they foam at the mouth, the more entire world — including the Muslim and Arab world — looks at them as clowns.