On Monday, Fadah Jassem announced that she would be joining Twitter as “Editorial Curation Lead” for the Middle East and North Africa (MENA).

“Very excited to get stuck in and delve deeper into the discussions that matter from this diverse and lively region,” the former Al Jazeera reporter wrote in a Twitter post.

In the message, she included the flags of 16 countries in the region, as well as the Palestinian one.

However, social media users were quick to point out that Israel’s flag was conspicuously absent.

Ladies and gentlemen, here is who @twitter chose to be its new “editorial curation lead” for the Middle East/North Africa (note which flag she left out) pic.twitter.com/pfpsaV2rwC

Jassem subsequently posted a tweet that included the flags of the Jewish state, Turkey, and Djibouti, while noting that she could not access the flag of Oman.

Indeed, Jassem in 2010 seemingly cited Louis Farrakhan as saying that “we give you our tax dollar to support Israel every year.”

The Nation of Islam leader’s Jew-hatred, as documented by the Anti-Defamation League, is well-known.

For instance, in 2009, Farrakhan claimed that “the Israeli lobby” controls the US government, and questioned the “veracity of the [fatality] figures of the Holocaust.”

In 2010, Farrakhan waged a public relations campaign against what he called “the synagogue of Satan” and “Satanic Jews.”

Yet, that same year, Jassem called Farrakhan a “great example of faith transcending boundaries,” and quoted him at least four times.

The items related to Farrakhan were posted when Jassem was in her mid-twenties, shortly before she was employed as a freelance producer by NBC News’ London desk.

Additionally, Jassem retweeted a post declaring that Israel was “not born” but, rather, “dropped like a bomb in the middle of Palestine.” She also amplified false claims that “Jesus was a Palestinian.” 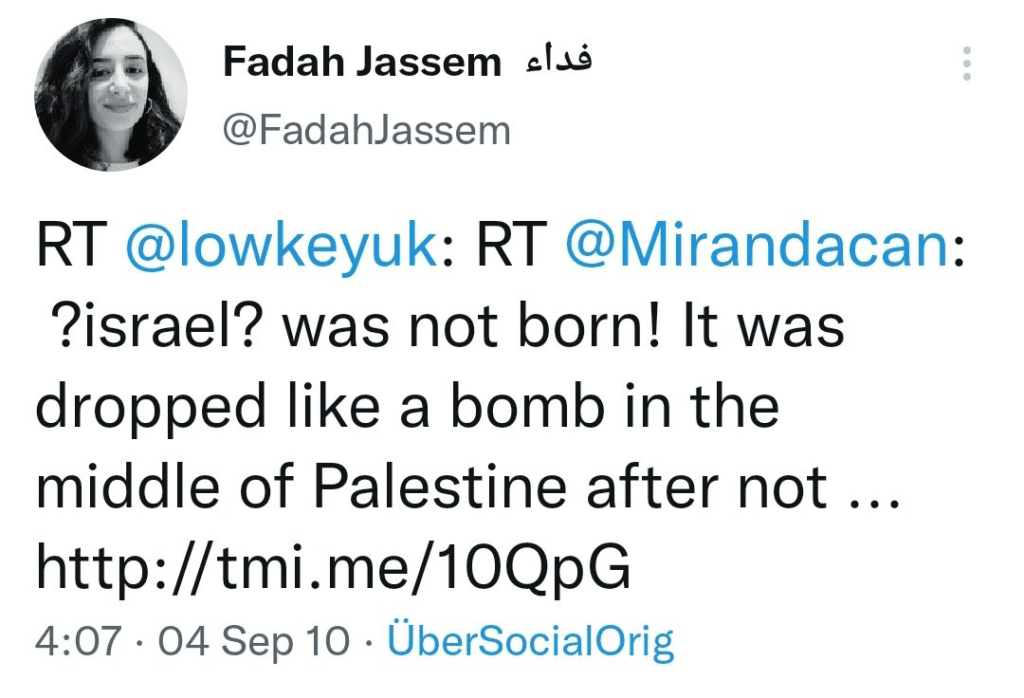 “I can see that I have been ill-informed with some tweets when [I was] younger. I apologise [British spelling] for any offence caused by these particular tweets,” she wrote to HonestReporting’s Emanuel Miller. 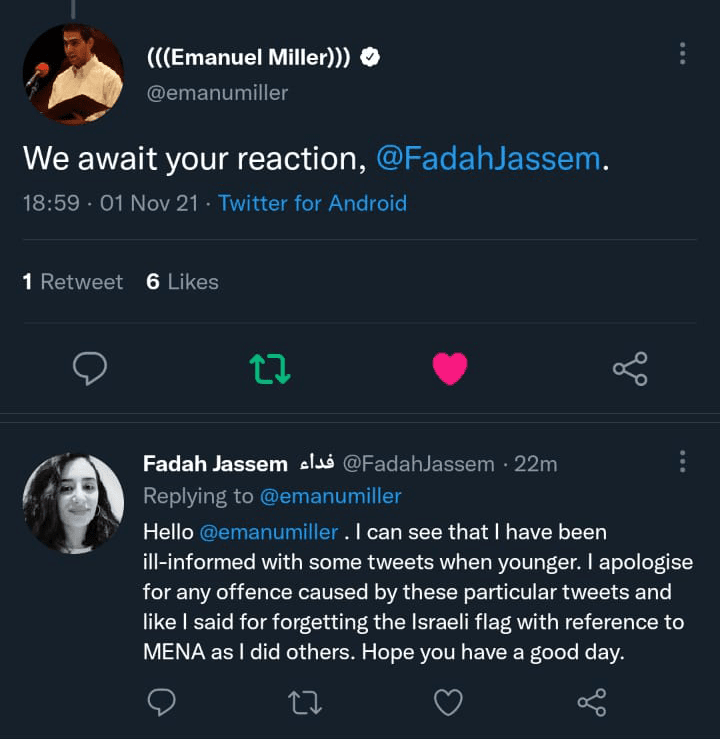 But HonestReporting flagged a post late on Monday that complained about “trolling”: 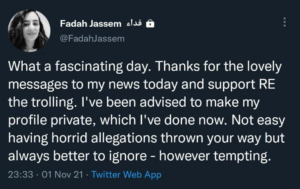 According to her job description, Jassem will be responsible for highlighting the “best, most relevant, and timely content that reaches, engages and delights one of the largest daily audiences in the world.”

Khamenei has used his Twitter account to repeatedly call for the Jewish state’s destruction. When asked point-blank why these tweets have not been removed, a Twitter representative stumbled over the question.

Given Jassem’s apology for disseminating “ill-informed” tweets, HonestReporting urges her to take a public stand against and actively work towards the elimination of anti-Jewish racism on Twitter.

Thank you for the reply. Glad to hear it. Really. A number of my colleagues remain concerned, citing pro-Israel accounts being blocked and a comment with the Israeli flag being hidden.

The author is a writer-researcher for HonestReporting, a Jerusalem-based media watchdog with a focus on antisemitism — where a version of this article first appeared.