A group of Palestinians in Bethlehem mark the centenary of the Balfour Declaration by burning Israeli flags alongside an effigy of Lord Balfour. Photo: Maan news agency.

In anticipation of this week’s 104th anniversary of the Balfour Declaration, the Palestinian Authority (PA) once again confirmed its most basic stance: There will be no peace until Israel is destroyed.

Describing the Balfour Declaration as “the most despicable global colonialist plan in history,” a regular columnist in the PA official daily added:

After 104 years, the world is still incapable of correcting this historical mistake and this severe injustice by putting an end to the colonialist Zionist project. … After 104 years, the conflict is still continuing, and it will not stop until this promise and its consequences are canceled.

In other words, until the “Zionist project” (i.e., Israel) is “cancelled,” the Palestinian conflict against Israel will continue.

Fatah echoed this sentiment, publicly calling for the end of Israel:

The Balfour Promise will remain a living headline for our tragedy that will not end, except with the end of the occupation state — the racist apartheid state. 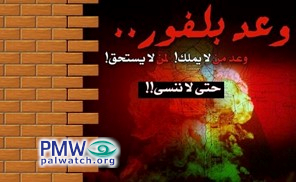 Fatah included the image above with the following text:

As Palestinian Media Watch has shown, every year the PA and its institutions mark November 2nd with a comprehensive diatribe against the Balfour Declaration.

This year, PA Chairman and President Mahmoud Abbas issued a new “presidential decree,” ordering that the “national flag” be flown at half-mast on all the PA governmental buildings, including embassies and representative offices abroad.

According to the official PA news agency Wafa, the aim of lowering the flag is to remind “the world in general and the United Kingdom in particular of the suffering of the Palestinian people and their rights to achieve independence, statehood and self-determination.” Last year, the PA courts held a trial against the UK government demanding that it be held accountable for the declaration and its consequences.

Unsurprisingly, the PA never mentions that prior to 1917, much of the Middle East and other regions were part of the Ottoman/Turkish Empire for 400 years. They never mention that an independent “State of Palestine” never existed. They similarly do not mention that the Balfour Declaration was not merely a British whim, but rather a decision adopted and ratified by the international community at the San Remo Conference in 1920.

The PA also never mentions that the Balfour Declaration was then adopted by the League of Nations in the 1922 Mandate for Palestine. At that time, “Palestine” included both Israel (including Judea and Samaria) and Jordan.

While pretending that Israel only has to withdraw to the 1967 borders to achieve peace, the reality is that every day, the PA further intensifies the anti-Israel propaganda and brainwashing of the Palestinian population. For the PA, only the cancellation of the Balfour Declaration and the undoing of its consequences — i.e. destroying Israel — will suffice.

To understand the central place of the Balfour Declaration in PA ideology read this article by Palestinian Media Watch (PMW) staff.

Maurice Hirsch, Adv. is the Head of Legal Strategies for Palestinian Media Watch, where a version of this article was first published.