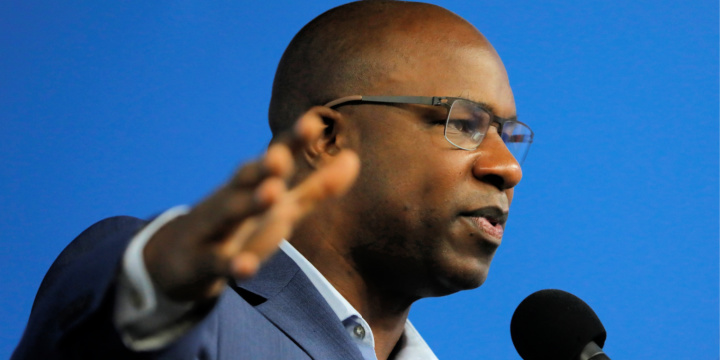 A push within the Democratic Socialists of America (DSA) to expel a progressive congressman from its ranks because of his opposition to the anti-Zionist campaign to subject Israel to a regime of “boycotts, divestment and sanctions” (BDS) continued apace on Tuesday.

A statement from the DSA’s “BDS and Palestine Solidarity Working Group” assailed Rep. Jamaal Bowman (D-NY) for having “once again crossed what we communicated as a hard line” by visiting Israel and speaking about the trip, sponsored by the left-wing J Street organization, to a group of university students.

Calls for Bowman’s expulsion from the DSA have multiplied in recent weeks, citing his visit to Israel and his vote in Congress last July in favor of renewed funding for Israel’s pioneering Iron Dome anti-missile system.

In its statement on Tuesday, the DSA’s Palestinian solidarity arm charged that Bowman was placing “political expediency ahead of Palestinian humanity.”

“[I]t is clear to us that Bowman’s shortcomings on Palestine, unfortunately, are not matters that can be corrected solely through political education,” the statement said. It added that the call for Bowman’s expulsion had been endorsed by Palestinian organizations. “Two of the largest Palestinian grassroots organizing bodies in America (i.e. National Students for Justice in Palestine and Palestinian Youth Movement) along with many more Palestinian-led groups have endorsed our call for expulsion as well. The BDS National Committee re-stated publicly just last week that politicians who travel to Israel with Israel lobby groups are crossing Palestinians’ BDS picket line and are harming the Palestinian struggle,” it said.

The hostility towards Bowman within the DSA has raised eyebrows because of his unashamedly left-wing affiliations. Bowman is a member of New York’s Lower Hudson Valley DSA, as well as of the so-called “Squad” of progressive House Democrats.

In 2020, he captured the Democratic nomination for New York’s 16th District by beating veteran pro-Israel Congressman Eliot Engel. During his contest against Engel, Bowman emphasized his support for security for both Israelis and Palestinians, saying in a newspaper interview: “One stark contrast between myself and Congressman Engel is I’ve been critical of occupation, annexation and detaining Palestinian children – where Congressman Engel has not. And it doesn’t mean that, you know, I’m not pro-Israel.”