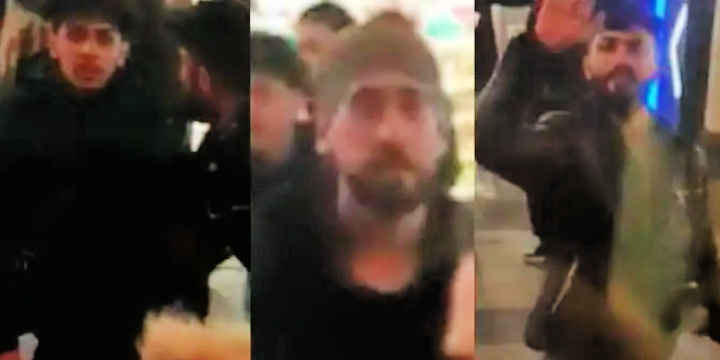 London police released new images of the men who attacked a busload of Jewish teens in the center of the city. Photo: Metropolitan Police.

Police in London released new images on Tuesday of three men being sought in connection with a shocking assault on a bus carrying Jewish teens celebrating the Hanukkah holiday in the center of the British capital.

On the evening of Nov. 29, a group of mainly Muslim men surrounded the bus as it stopped on Oxford Street, one of central London’s principal thoroughfares, carrying a group of teenage British and Israeli Jews from the Chabad movement who were singing Hanukkah songs.

The assailants first began mocking the teens, and then became more aggressive as the group returned to the vehicle — later hitting the bus and its windows with their shoes and fists. The Metropolitan Police said officers were deployed at the time of the incident, and later spoke with the victims at nearby Grosvenor Place, after the bus had left the scene to avoid further confrontation.

Detective Inspector Kevin Eade, who is leading the investigation, said on Tuesday that police were still trying to identify the assailants.

“Our investigation into this appalling incident continues and we are now in a position to release three clearer images of the men we would like to speak to,” Eade said. “Despite extensive inquiries over the past week, we are yet to make any arrests; however, I am confident that somebody will recognize the people in these images, and I would urge anyone who does to contact us immediately.”

Meanwhile, a separate row over the BBC’s coverage of the incident has continued to simmer.

After its initial report was posted online, the BBC amended its coverage with the claim that some of the Jewish teens inside the bus had responded to their assailants with anti-Muslim slurs — an allegation that was forcefully rejected by community leaders.

Rabbi Schneur Glitzenshtein, who organized the original bus trip, told the London Jewish Chronicle that none of the victims had used Islamophobic language.

“Not one word,” Glitzenshtein said. “Only good things. Happy words, happy songs. We came with the light, with happiness.”

“Gnasher Jew,” a UK-based Twitter account, said that close study of a clip of the incident had revealed that BBC producers had heard the slur “dirty Muslim,” rather than what was actually uttered — a cry for help in Hebrew.

The Hebrew words heard were “Tikra lemishehu, ze dachuf,” which translate into English as “call someone, it’s urgent.”

The father of one boy who was trapped on the bus during the assault angrily charged the BBC with false reporting.

“BBC News has demonized my son, who was on that bus, to serve their anti-Jewish agenda,” Yechiel Wilhelm said in a tweet.

And in a statement, the Board of Deputies of British Jews asserted that the BBC had “gotten this spectacularly wrong. Dangerously so.”

“The victims of antisemitic abuse are now being smeared as racists and therefore somehow less deserving of sympathy or, in the worst case, deserving of the abuse they received,” the statement continued. “This is deeply irresponsible journalism.”