Journalist Celebrates Palestinian Murderers and Terrorists as Heroes and ‘Martyrs’

Mohammed El-Kurd’s disinformation campaign related to US-designated Palestinian terror groups has been well-documented by HonestReporting. For example, The Nation’s “Palestine Correspondent” this year hailed as heroes “martyrs” responsible for suicide bombings and other horrific attacks on Israelis. He furthermore praised a plane hijacker and defended a terrorist stabber — all under the false guise of journalism (see here, here, here, here, and here).

Since The Nation announced El-Kurd’s appointment in September, he has produced three essays for the progressive site, each rife with falsehoods and justifications for violence perpetrated by Palestinians. His latest article, “My Neighbor Protested His Family’s Expulsion From Its Home — Now He’s in an Israeli Prison,” published on December 21, is no exception.

According to El-Kurd, Israeli forces this summer detained a Palestinian teacher by the name of Murad Attieh on “trumped-up charges” stemming from “protests” against possible evictions in the contested eastern Jerusalem neighborhood of Sheikh Jarrah/Shimon HaTzadik.

“Murad Attieh has been in prison for 133 days for what many believe is an effort to criminalize our movement,” El-Kurd’s piece lamented.

Yet information obtained by HonestReporting from online and official sources casts serious doubt on the innocence of El-Kurd’s “kind and helpful neighbor.”

While the case is still making its way through the court system, the available evidence — none of which is discussed in El-Kurd’s article — indicates that The Nation’s correspondent is covering up terrorist activities.

Murad Attieh is alleged to be a member of a “neighborhood committee” that organizes violent riots with a view toward thwarting legitimate and peaceful efforts by Jewish Israelis seeking to reclaim ownership of properties that were confiscated from them or their families between 1948 and 1967, when Jordan occupied the West Bank, including Jerusalem. The violence targets Jewish civilians living in Shimon HaTzadik, as well as police forces.

According to an August 10 criminal indictment, “a meeting took place in the month of May 2021, at the house of the defendant [Murad Attieh], in his presence together with five others identified [as being affiliated with] several terror groups including Hamas, the Popular Front [for the Liberation of Palestine (PFLP)], the Democratic Front and Islamic Jihad.” During the gathering, which occurred on the backdrop of the 11-day conflict between the Israel Defense Forces and Gaza-based terror groups led by Hamas, the participants purportedly agreed to increase violent confrontations with Israeli security forces in Sheikh Jarrah.

As part of the alleged plan, Attieh was tasked with patrolling the neighborhood’s rooftops, identifying police positions, and helping assailants escape after committing prospective assaults with stones and Molotov cocktails. He moreover stands accused of buying four liters of gasoline to be used against police, and financing the purchase of fireworks. On July 30, Sheikh Jarrah resident Suhaib Siam approached Attieh with a request for NIS 360 ($115). According to prosecutors, Attieh knowingly transferred NIS 500 ($160) to buy fireworks used the next day to attack security services. 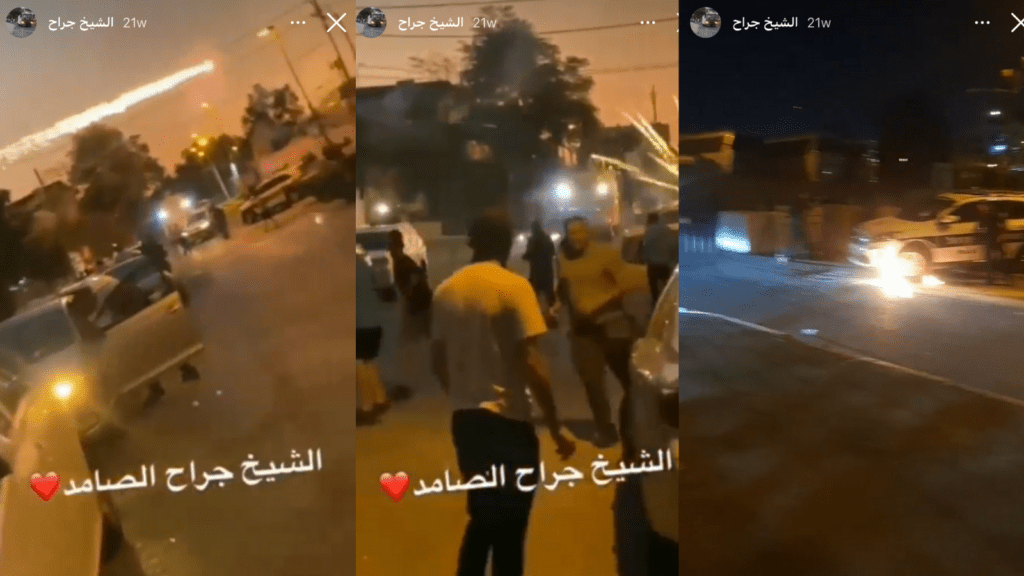 Indeed, videos posted on Murad Attieh’s Instagram account on July 31 and August 1 depict violent scenes of Palestinians throwing fireworks at security forces attempting to disperse rioters in Sheikh Jarrah. One of the clips uploaded by Attieh shows a police car that was apparently hit by a firebomb. To put things into perspective, a US court last month sentenced a man who hurled fireworks at police officers to eight years in prison, whereas some European prosecutors treat the act as attempted manslaughter — even when there is no terrorist intent.

Over the summer, El-Kurd’s neighbor also apparently participated in riots near the West Bank town of Beita. As HonestReporting has repeatedly highlighted (see, for example, here, and here), the Palestinian Authority-backed violence has included ecoterrorism, the detonation of powerful explosive devices, and the burning of swastikas. On social media, Attieh shared sermons by Mahmoud al-Hasanat, an Islamic preacher who is particularly popular among Hamas supporters in the Gaza Strip.

Attieh was arrested on August 10, and the Jerusalem District Court has since extended his detention several times, with his latest hearing having been held on December 26. A spokesperson for the court this week confirmed to HonestReporting that “Murad Attieh was arrested until his case comes to a conclusion.” The formal request by the District Attorney’s Office to keep him detained, a copy of which HonestReporting obtained, makes clear that the evidence against Attieh includes “his confession, the implication of accomplices, police testimony, written confession and more.”

Arab media reported that Mohammed El-Kurd four months ago received a summons for questioning by Israeli police in relation to Attieh’s arrest.

Meanwhile, The Jerusalem Post in October revealed that residents of Sheikh Jarrah had reached out to Hamas leader Ismail Haniyeh. “You are not alone, your people are with you, your resistance is with you,” the Qatar-based Haniyeh reportedly told them during a phone call. The Palestinian National and Islamic Forces — a coalition that includes Hamas, the PFLP, and Islamic Jihad — expressed their support in a letter to the families’ lawyers.

These are the plain facts regarding the ongoing court case, as partially reported on September 12 by news site Mynet.

Nevertheless, Mohammed El-Kurd in his December 21 article whitewashes the accusations against his neighbor, thereby completely blurring the line between responsible journalism and political activism.

In fact, El-Kurd romanticizes Attieh while glossing over indications that his neighbor conspired with US-designated terror groups.

Few people know that the campaign of intimidation has not ended for the residents of Sheikh Jarrah. It has, rather, continued in the form of arrests and trumped-up charges against both neighborhood residents and other Palestinians who protested during this time. Murad is one example of this campaign.

Four months after Murad disappeared into the legal swamp that swallows so many Palestinians, his fate remains as uncertain as ever. What many who know him believe, however, is that Murad’s stance against yet another Nakba [‘Catastrophe‘] has almost certainly cost him his freedom.

El-Kurd proceeds to uniquely quote Attieh’s defense team, comprising Nasser Odeh — who happens to be the El-Kurd family’s lawyer — and Lea Tsemel, an attorney known for her work in defense of Palestinian would-be suicide bombers. The piece does not delve into the evidence that the prosecution will present during the upcoming trial, but instead echoes claims by Odeh and Tsemel that their client has been “preyed on by an undercover [Israeli] unit” and “Palestinian informers posing as jailed militants.”

When Mohammed El-Kurd on December 4 wrote on Twitter that “Israeli occupation forces shoot a Palestinian young man near Damascus Gate in occupied Jerusalem,” all the while omitting that the terrorist had just attempted to stab an Orthodox Jew, The Nation editor D.D. Guttenplan responded to criticism as follows:

Without getting into the accuracy of either Mohammed El-Kurd’s tweet or your portrayal of that tweet, I can tell you that The Nation cannot and does not undertake to police the social media of our contributors–who number in the thousands every year.

However, El-Kurd is not simply one of The Nation’s “thousands” of contributors; he is their “correspondent” covering a complex issue from a region where anti-Israel disinformation and fake news are rampant.

In this vein, El-Kurd has produced a one-sided account of a story that ignores an individual’s possible links to US-designated terror groups — thus depicting a skewed picture of the situation to The Nation’s 1.8 million-plus followers on social media.

It’s time that the outlet starts taking seriously its declared purpose of speaking “truth to power to build a more just society” by ceasing to disseminate half-truths and outright lies.