There are countless types of media bias. From ignoring the inability of blatant antisemites to act as “objective” journalists, to obsessive coverage of the faults — real and perceived — of one side while overlooking the faults of others.

But there are perhaps none so needlessly irksome as when an article is republished, but with details changed so that the message is distorted.

And that’s exactly what CBS did on January 1st, when it used syndicated content taken from the Associated Press wire service, but changed the headline in a way that fundamentally warped the story.

The original piece, which can be found on the Associated Press website here, was titled “Israeli jets hit militant targets in Gaza after rocket fire.” While the article was republished verbatim on the CBS website, editors were evidently not willing to run the original headline, and elected to run the content under the words, “Israel hits Gaza with airstrikes.” 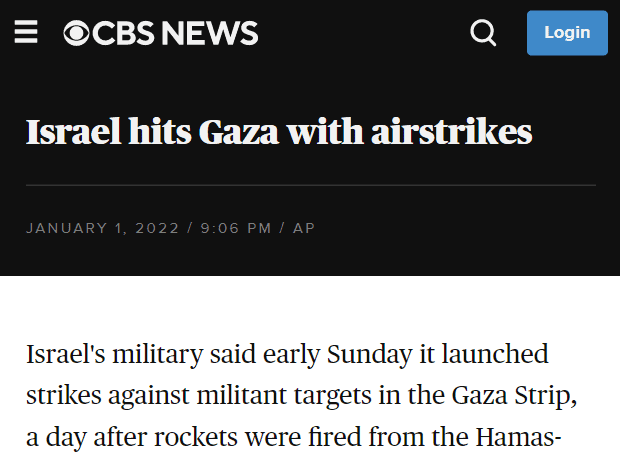 It should be noted that the Associated Press is not blameless; not for the first time, international journalists only began reporting this story once Israel returned fire after coming under attack. Accordingly, the AP copy describes how “three huge explosions” were seen in the southern Gaza Strip while fighter jets were audible overhead.

Only in the fourth paragraph is it made clear that rockets fired from Gaza landed in the sea adjacent to central Israel. According to media reports in Israel, two rockets launched from Hamas-run Gaza fell off the Palmachim coast, located south of Rishon Lezion, and the second near the coast of Tel Aviv, a city which merges with numerous others, including Ramat Gan, Bnei Brak, Givatayim, Bat Yam, and Holon. Had either missile deviated from its course or been fired just slightly to the east, civilians would have been directly threatened.

Furthermore, while the Associated Press is careful to note that “Gaza-based militant groups often test-fire missiles toward the sea,” it fails to note that Hamas has previously blamed lightning strikes for setting off rockets aimed at Israel.

The AP also failed to make clear that the Israeli Air Force often chooses to strike unmanned terror targets in Gaza, such as empty watchtowers and unused Hamas bases, as a warning. Simply stating the fact that “there was no immediate confirmation on possible casualties” fails to convey the reality that Israel strives to avoid casualties, even when it is forced to take serious measures in a bid to deter Gaza-based terrorists.

But the true culprit in the manipulation here is CBS, and they should be held accountable for their actions.