Between January 15 and January 22, 2022, an international campaign was held in support of having Ahmad Sa’adat and all Palestinian terrorists freed from Israeli prisons. Some of these demonstrations were attended by Jews in religious garb waving Palestinian flags and displaying anti-Israel banners, including one reading: “Authentic rabbis always opposed Zionism and the state of Israel.”

These people are members of an ultra-Orthodox group of Jews known as the Neturei Karta.

A video of their participation in the initiative was posted to a YouTube channel with 2.1 million subscribers. This is just one of the latest examples of Neturei Karta being co-opted by anti-Zionists to “justify” their anti-Israel and antisemitic agendas.

Neturei Karta, which means “Guardians of the City” in Aramaic, rejects the existence of the State of Israel. The group’s followers believe that Jewish sovereignty in the Holy Land can only be established following the arrival of the Messiah.

During the early 19th century, various Jewish religious denominations held such beliefs. They perceived Zionism as standing in opposition to the Talmud, which teaches “that we are forbidden to rebel against the nations and that we should remain loyal citizens and we shall not attempt to leave the exile which G-d sent us into, ahead of time.”

Today, the Neturei Karta reside mostly in the Israeli neighborhoods of Batei Ungarin and Meah Shearim. They also have a presence in London and New York, where they continue to publicly express their opposition to Israel.

For example, on January 2, Jews held a rally in Brooklyn after two 21-year-olds wearing IDF shirts were harassed and called “dirty Jews.” A counter-rally was held across the street, organized by Neturei Karta along with the pro-Palestinian group Al-Awda. Neturei Karta posted a YouTube video of the event. In the accompanying description, Neturei Karta claimed that the pro-Israel protest effectively “defend[ed] a boy who engaged in provocation in a Palestinian neighborhood in New York.”

On July 31, 2021, an “Honor the Martyrs of Palestine Memorial and Rally” was held in Brooklyn. Despite the fact that the event was scheduled on the Sabbath, when driving is prohibited in traditional Judaism, Neturei Karta members journeyed an hour and a half in order to attend. They then posted another YouTube video and accused Israel of “murder[ing] in one week a number of Palestinian civilians including children.”

Neturei Karta currently consists of a reported 5,000 members — a mere 0.03 percent of the worldwide Jewish population. Yet, the fringe group somehow manages to make it into the news on a regular basis. 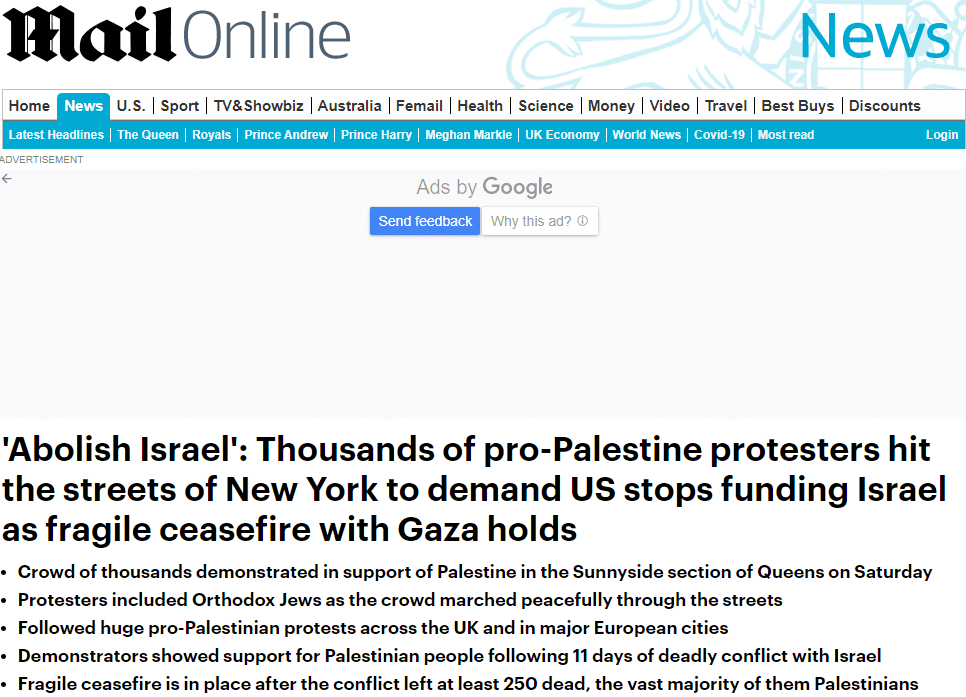 Despite their increasingly small numbers, some of the world’s leading anti-Zionists attempt to depict Neturei Karta as maintaining views that are representative of the Jewish people as a whole, or a large segment thereof. This false impression enables others to argue that if, “even Jews are against the existence of a Jewish state, why shouldn’t I be too?”

Indeed, Neturei Karta’s actions do not end with anti-Israel protests. Members of the group have met with Iranian officials, as well as leaders of the Palestine Liberation Organization (PLO). Neturei Karta has also associated with internationally-recognized terrorist groups, having gone so far as to bring a gift for Hezbollah chief Hassan Nasrallah to Beirut, and traveling to the Gaza Strip in 2009 to meet with Hamas leader Ismail Haniyeh.

On October 26, 2005, Iranian President Mahmoud Ahmadinejad held a conference in Tehran titled, “The World Without Zionism.”

It was an antisemitic event that generated a worldwide backlash, including condemnations from the United States, the UK, France, and Russia. Yet, Ahmadinejad was lavished with praise by Rabbi Yisroel David Weiss, one of Neturei Karta’s most influential figures at the time. Weiss stated that “Orthodox Jews over the world are saddened by the hysteria which has greeted the recently stated desire of the Iranian President Mahmoud Ahmadinejad, to see a world free of Zionism.”

Weiss asserted that the desire to end Zionism is “a yearning for a better, more peaceful world.”

Neturei Karta also associates with Holocaust deniers. For example, members took part in the 2006 Holocaust Denial Convention in Tehran. During this convention, Rabbi Weiss stated that “They [Jews] have used the Holocaust as a device to justify their oppression.”

Rabbi Dovid Feldman, a spokesman for Neturei Karta, said on January 27, 2014, at an Auschwitz memorial press conference, that “[t]he Zionists’ use of the Holocaust for their political purposes is an insult to the memories of the victims.”

Rabbi Moshe Dov Ber Beck, a leader of Neturei Karta who passed away in 2021, is another Holocaust denier. This, even though Beck spent his early years hiding along with his brother from the Nazis during World War II. He then immigrated to Israel in 1948, but decided to move to New York in 1970 due to his opposition to Zionism. 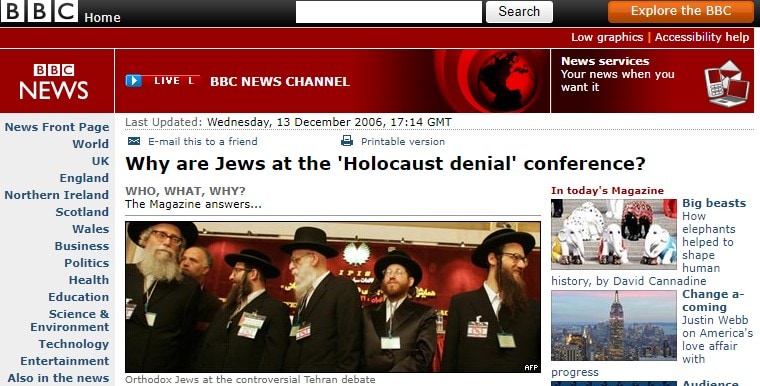 Despite having experienced the horrors of the Holocaust, Beck stated: “The Zionist policy during the Holocaust was that only Jewish bloodshed on a massive scale could help them achieve their state after the war. They provoked antisemitism and sabotaged rescue efforts, all for their political goals.”

Furthermore, Neturei Karta has close ties with the PLO. Rabbi Moshe Hirsch, a former leader of the group, became a companion of the late PLO chairman and notorious terrorist Yasser Arafat. Arafat chose Rabbi Hirsch to be his adviser on Jewish affairs. When Hirsch passed away in 2010, senior Fatah leaders visited the Jerusalem neighborhood of Mea Shearim to offer their condolences.

During this time, Hatem Abdel Qader, an adviser on Jerusalem affairs to current Palestinian Authority President Mahmoud Abbas, told the Associated Press: “We consider Rabbi Hirsch a part of the Palestinian people. He is one of the Palestinian Jews whom we give all respect, and this is to confirm that our problem is not with the Jews as a religion, it’s with Zionism.” 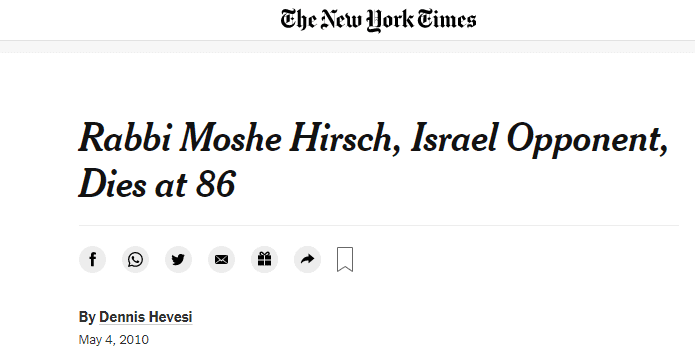 Given all this, why is it that Neturei Karta so frequently generates worldwide media coverage (See here, here, here, and here)?

Focusing on such a fringe group calls into question the judgment of leading news organizations, which are tasked with providing balance within the context of the complicated, nuanced Israeli-Palestinian conflict. News outlets’ disproportionate reporting on Neturei Karta risks effectively mainstreaming the group’s radical agenda, and serves to whitewash the antisemitism espoused by governments and terrorist groups across the globe that are committed to the Jewish state’s destruction.

Originally from Johannesburg, South Africa, Dina Leah Kay is a recent high school graduate who plans to study law and political science. She is a Winter 2022 intern for HonestReporting, a Jerusalem-based media watchdog with a focus on antisemitism and anti-Israel bias — where a version of this article first appeared.