Abbas: Christians and Muslims Must Fight Their ‘Enemy’ — Israel

The idea and goal that Israel will come to an end is pronounced in PA ideology and PA teachings. Recently, Palestinian Media Watch exposed this in our report on Fatah’s Waed magazine for young children, ages 6-15. One of the central teachings in the magazine is that “Palestine” will inevitably replace all of Israel.

Waed teaches Palestinian children that they are descendants of a “Palestinian-Arab-Canaanite” people who existed “5,000 years ago,” or “perhaps 10,000 years ago.” (Waed, Issue 37, pp. 13 and 22). On the other hand, Jews — who have a rich and well-documented history in the land over thousands of years — are said to have never been in the land of Israel: “[Israelis are] foreigners who did not know Palestine and did not live in it — neither them nor their fathers and forefathers.” (Waed, Issue 36, p. 2)

Abbas’ statement above, made at a meeting in Ramallah with Greek Orthodox Patriarch in Jerusalem Theophilos III, joins his and other PA officials’ numerous previous statements denying Jewish history in “Palestine.” A similar recent statement was made by PA Shariah judge Abdallah Harb, who claimed Israelis/Jews are “liars” who invented a narrative and brought in archaeologists to prove a Jewish presence in the land but “didn’t succeed” because “they are the people of falsification and untruth”: 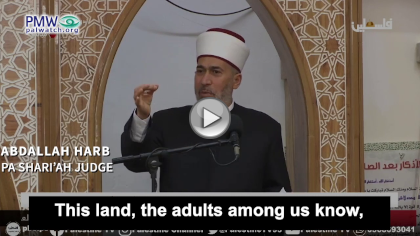 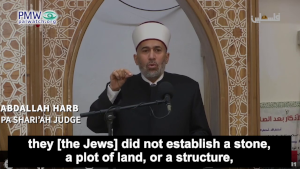 PA Shari’ah Judge Abdallah Harb: “This land, the adults among us know, they [the Jews] did not establish a stone, a plot of land, or a structure, as they brought all the archaeologists [here] to prove that this land is theirs, that it is ‘The Temple Mount,’ that it is ‘the promised land.’ They didn’t succeed in this. … They are oppressors, they are liars, and the right is ours. Ours is the true unblemished and undisputed historical narrative. They are the people of falsification and untruth.”

Contrary to what the preacher claims, an abundance of archaeological evidence proves Jewish history in Israel. For example, the Kurkh Monolith inscription of Shalmaneser III, the king of Assyria (859–824 BCE) mentions the defeat of “10,000 soldiers of [King] Ahab the Israelite,” which is the story told in detail in the Bible (Kings 2, chap.19). Meanwhile, the Palestinians have no history prior to the modern period.

The author is the founder and director of Palestinian Media Watch, where a version of this article first appeared.