Palestinians: ‘Martyrdom Is a Call of Allah … Kidnap a Soldier for My Children’ At a recent rally in Ramallah in support of imprisoned Palestinian terrorists, the choice of song by the Palestinian crowd doesn’t leave much to the imagination in terms of what the Palestinians want: 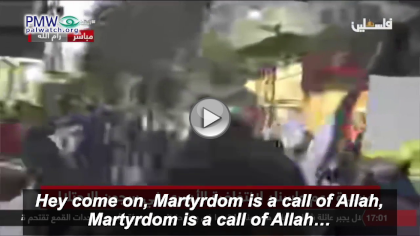 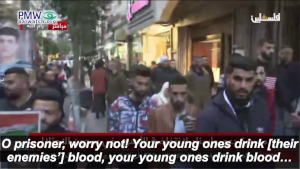 In other words, Allah wants Palestinians to die as “martyrs,” while using violence and terror against Israel — “drink blood” and “put the sword against the sword.”

And Palestinians are willing to comply. They are also in favor of kidnapping Israeli soldiers to use as bargaining chips for the release of imprisoned terrorists. This is what the Hamas terror organization did when it kidnapped Israeli soldier Gilad Shalit and held him for five years until Israel ultimately agreed to release 1,027 terrorists in exchange for him.

Another recent chant, this time led by Fatah Jenin Branch Secretary Ata Abu Rmeileh, and answered by the participants in a Fatah rally in Jenin, also encourages and calls for sacrificing one’s souls and blood, presents death for “Palestine” as an ideal, and repeats the well-known saying by Arafat: “Millions of Martyrs are marching to Jerusalem.” 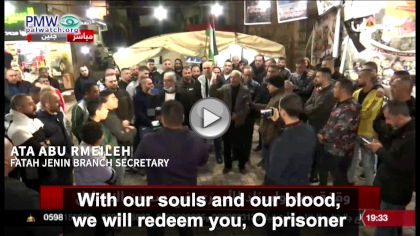 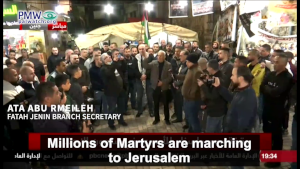 Another testimony of some Palestinians’ eagerness to become “martyrs” for Allah while fighting Israel was delivered at the funeral of terrorists Abdallah Al-Hasri and Shadi Khaled Najm, who were killed while they shot at Israeli security forces. The brother of terrorist Al-Hasri recounted how his brother had expressed his wish to die and meet Allah: 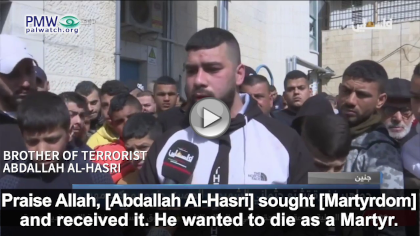 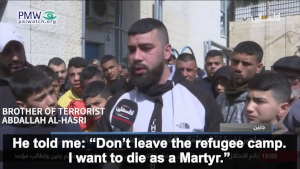 Palestinian Media Watch has documented the Palestinian Authority’s encouragement of Palestinians to seek martyrdom deaths by carrying out terror attacks. The sentence “We are the people of Muhammad Deif” has become a slogan for the imprisoned Palestinian terrorists and is shouted by activists at demonstrations and rallies in support for the terrorists and their release from Israeli prison.