Israeli soldiers guard along a fence leading to Judea and Samaria, as part of search efforts to capture six Palestinian terrorists who escaped from Gilboa Prison earlier this week, by the village of Muqeibila in northern Israel, September 9, 2021. REUTERS/Ammar Awad/File Photo

Under the auspices of Tulkarem District Governor Issam Abu Bakr and the Tulkarem Education Directorate — which is under the Palestinian Authority (PA) Ministry of Education — the PA inaugurated a garden at the Al-Adawiya High School for Girls in Tulkarem to celebrate and glorify terrorist murderers.

The garden will remind the young girls to honor and admire what the PA calls “the freedom tunnel prisoners” — six terrorist prisoners who temporarily escaped the Gilboa Prison in 2021. The six are imprisoned for planning and carrying out numerous terror attacks, including suicide bombings and shooting attacks.

At the school event, students held posters with photos of terrorist prisoners, among them imprisoned terrorist Abbas Al-Sayid, who was responsible for the murder of 35.

Abbas Al-Sayid planned two suicide bombings, one at a Passover dinner at the Park Hotel in Netanya, in which 30 were murdered on March 27, 2002, and another outside a shopping mall in Netanya, in which five were murdered on May 18, 2001. Al-Sayid is serving 35 life sentences for these crimes. On his garden event poster is written: “Abbas Al-Sayid — because you are free, support their freedom:” 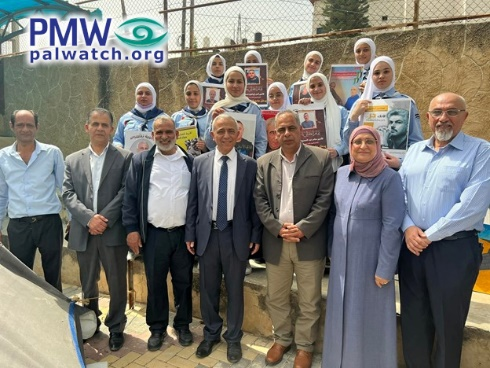 [Facebook page of the Al-Adawiya High School for Girls in Tulkarem, April 19, 2022]

The female students also held posters of terrorist prisoners Samer Al-Atrash, who was involved in the murder of seven, and of Ahmad Sa’adat, head of the Popular Front for the Liberation of Palestine (PFLP) terror organization.

Standing third from the right in the front row is Tulkarem Education Directorate Head Saed Qabha: 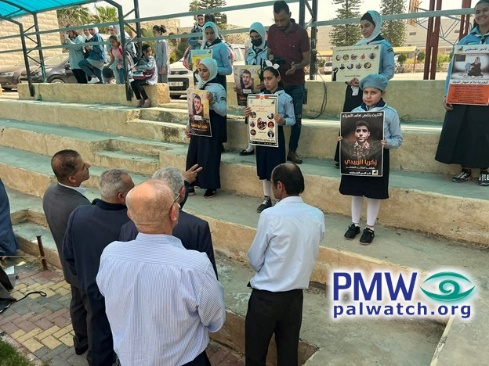 Posters of terrorist prisoners held by even younger students included Nasser Abu Hmeid, who was responsible for the murder of seven, and Zakariya Zubeidi, one of the six escapees who was head of the Al-Aqsa Martyrs’ Brigades (Fatah’s military wing) in the Jenin area during the Second Intifada, where he oversaw numerous lethal attacks.

This was written on his poster: “The dragon defeats the hunter.”

Dedicating school gardens in honor of terrorist murderers is apparently PA policy. Palestinian Media Watch reported earlier this month that the PA similarly honored 16 murderers at a boys’ school. The PA inaugurated a garden at the school in honor of terrorists serving one or numerous life sentences for murdering Israelis: 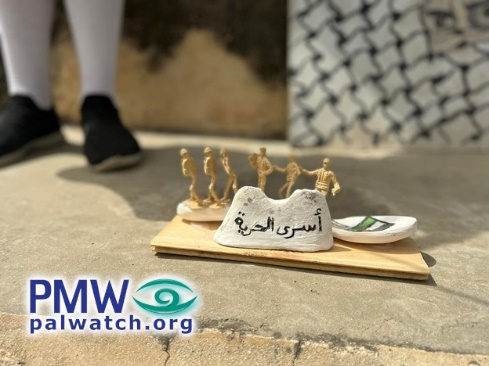 The image shows a display showing support for terrorist Zakariya Zubeidi. He is represented by an action figure of the character Finn from the Star Wars film series with a weapon in one hand and a spoon attached to his other hand, in reference to the spoon the prisoners used to dig their way out to escape. Behind the figure is a sign with the following text: “With determination we executed this decision (the freedom tunnel).”

The event also included the unveiling of a monument showing two chained hands making the “V” for victory, symbolizing support for the prisoners.