Relatives of Palestinian prisoner Hisham Abu Hawash, who is held by Israel, celebrate after he ended his hunger strike, in Dura, the West Bank, January 4, 2022. REUTERS/Mussa Qawasma 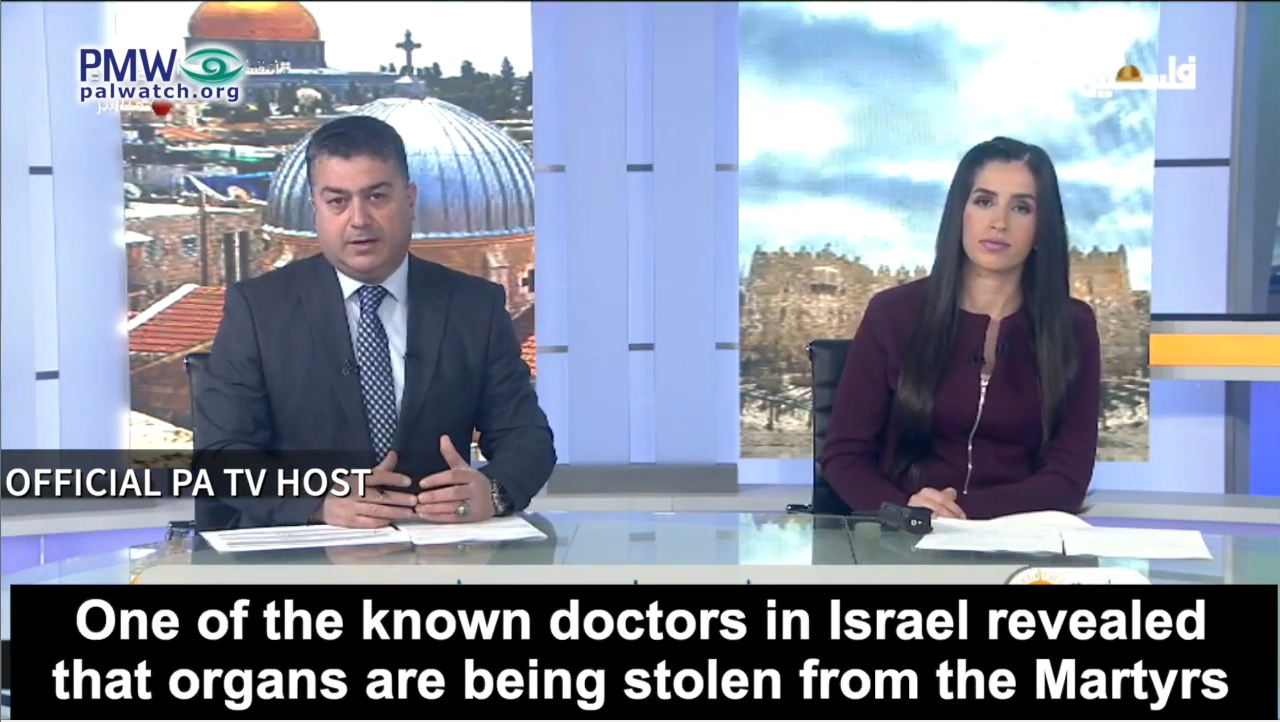 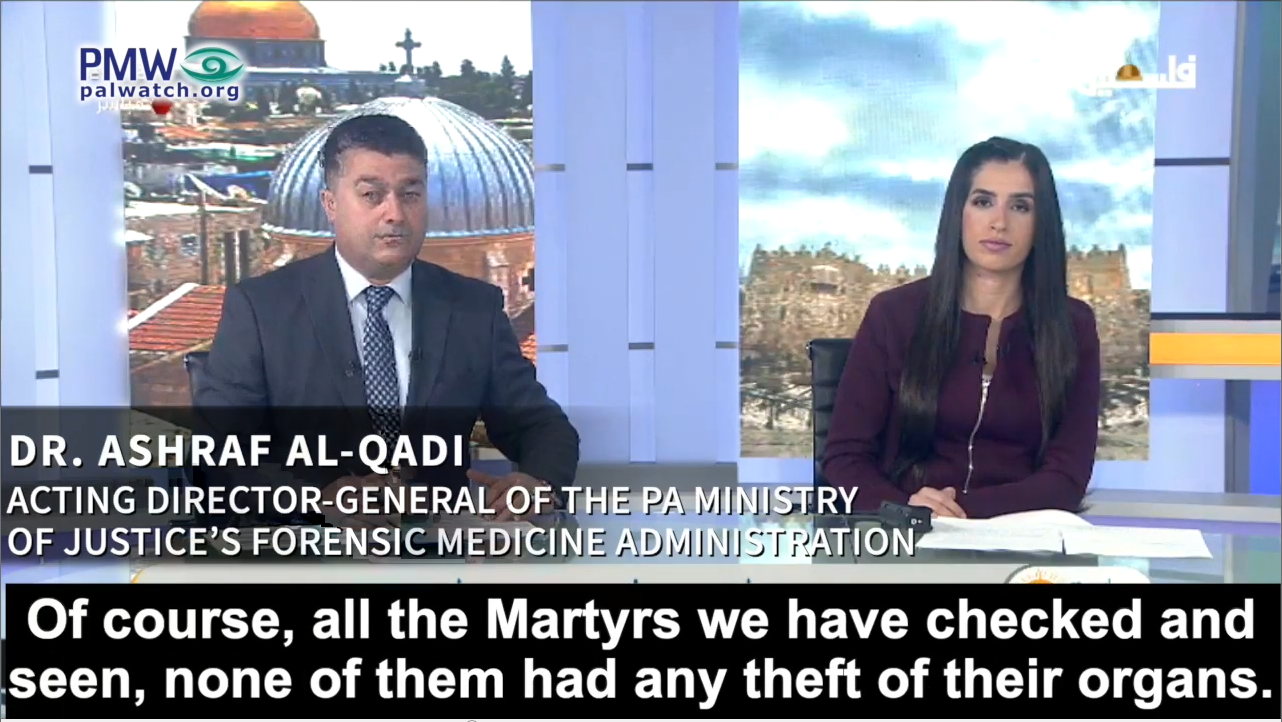 Official PA TV host: “Our guest is Dr. Ashraf Al-Qadi, Acting Director-General of the [PA] Ministry of Justice’s Forensic Medicine Administration. … One of the known doctors in Israel revealed that organs are being stolen from the Martyrs held in refrigerators in Israel [sic]..”

Acting Director-General of the PA Ministry of Justice’s Forensic Medicine Administration, Dr. Ashraf Al-Qadi: “Of course, all the Martyrs we have checked and seen, none of them had any theft of their organs. I don’t know about the Martyrs from before, whom we did not check as a Palestinian side or authority.” 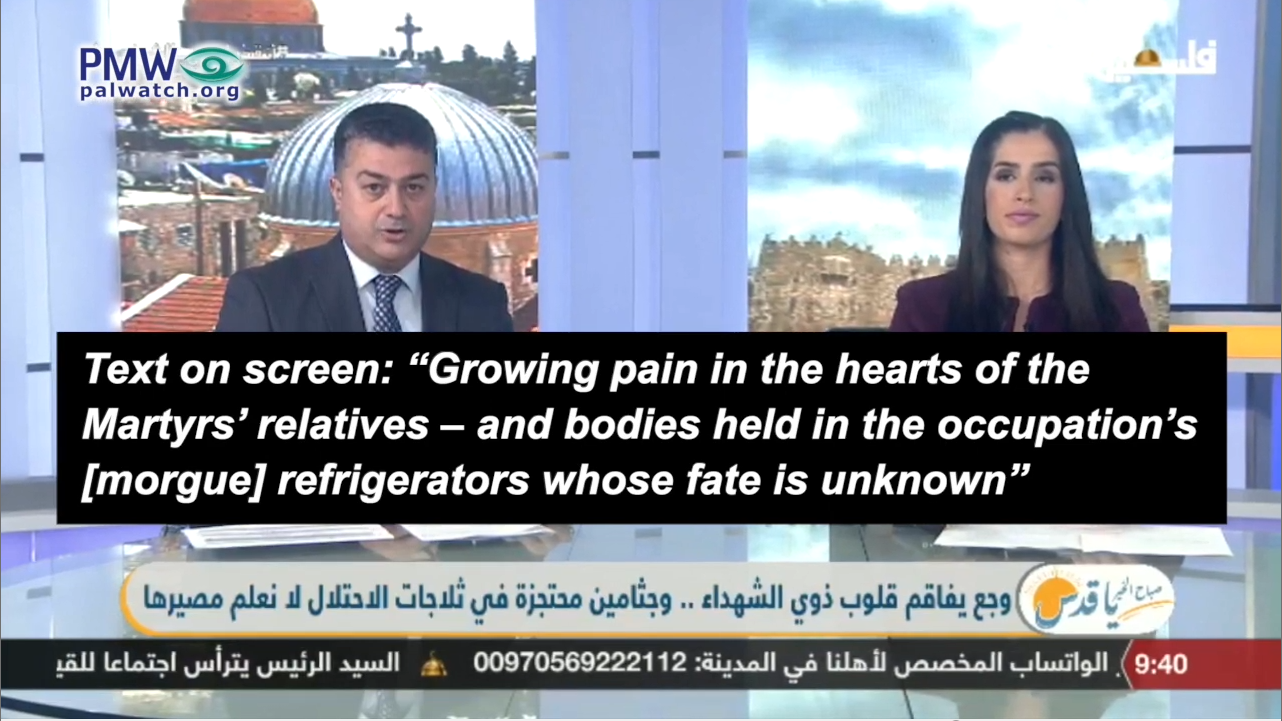 Text on screen: “Growing pain in the hearts of the Martyrs’ relatives – and bodies held in the occupation’s [morgue] refrigerators whose fate is unknown”

Despite the explicit refutation by this PA official, the PA is still lying about the situation. 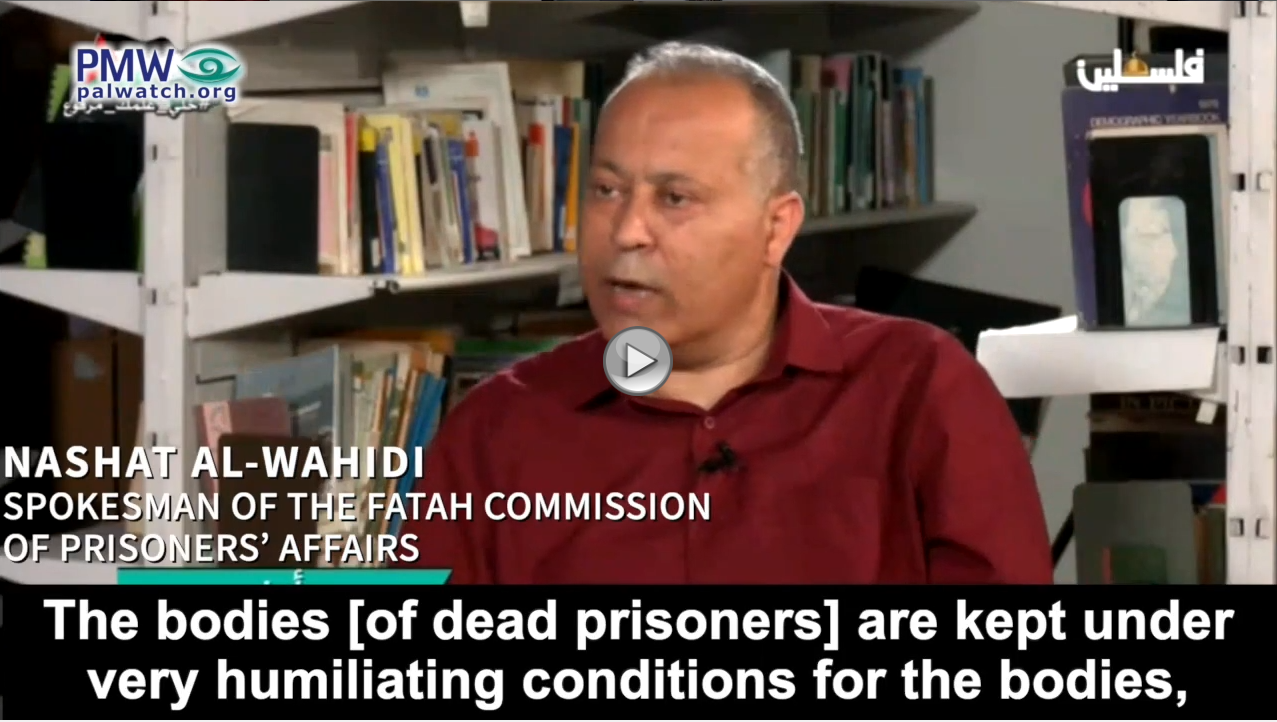 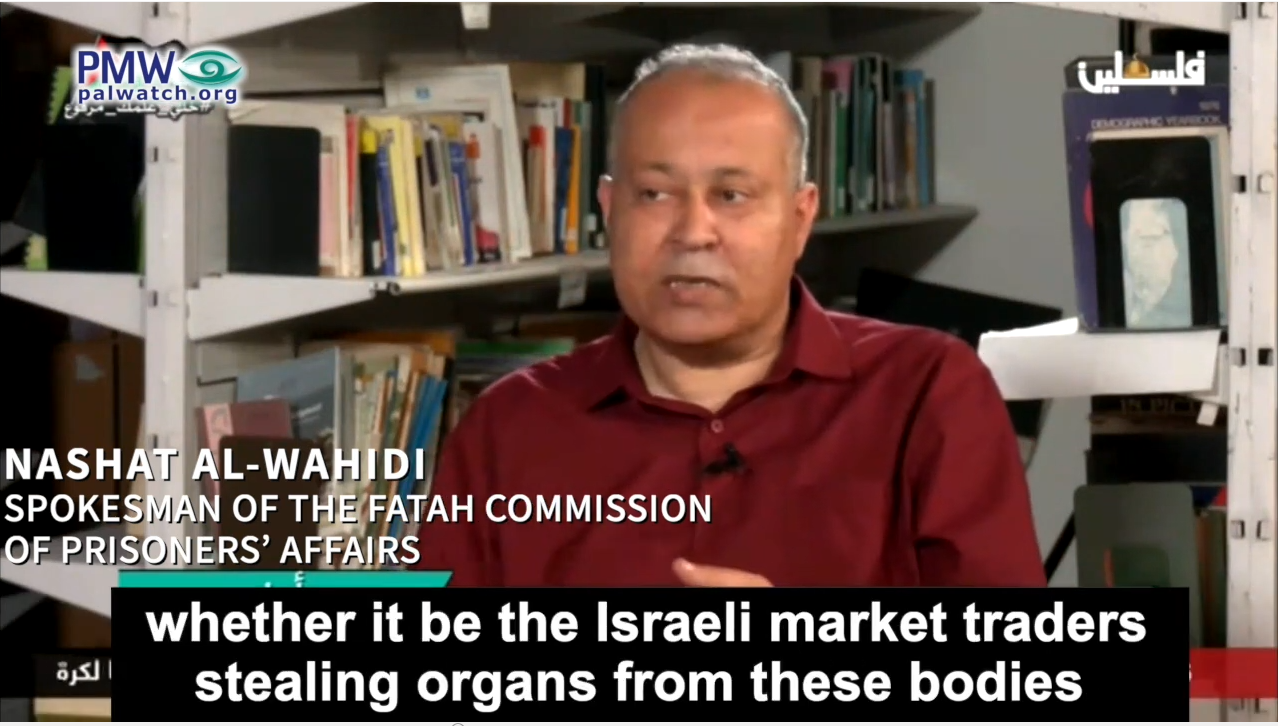 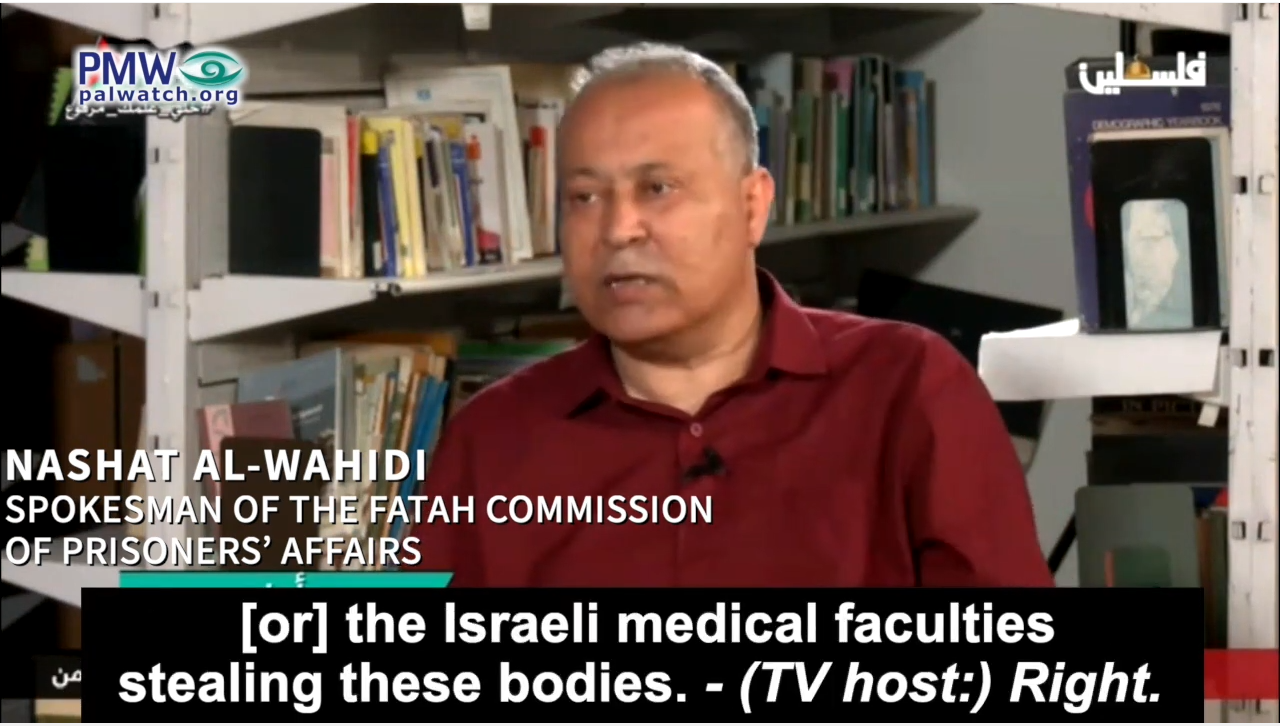 Spokesman of the Fatah Commission of Prisoners’ Affairs Nashat Al-Wahidi: “The bodies [of dead prisoners] are kept under very humiliating conditions for the bodies, whether it be the Israeli market traders stealing organs from these bodies [or] the Israeli medical faculties stealing these bodies.”

PA Minister of Justice Muhammad Shalaldeh also unwittingly undermined the PA libel, stating that since 2013, a PA forensic expert has been present at autopsies of Palestinians:

“[PA] Minister of Justice Muhammad Shalaldeh … noted that in 2013, Palestine succeeded in forcibly extracting a ruling determining that a Palestinian doctor needs to participate in autopsies of Palestinians.”

PMW has found no record of the ruling referred to by Minister Shalaldeh.

The allegation that Israel routinely steals organs from dead Palestinians is one of the long-standing Palestinian libels documented by Palestinian Media Watch. Like many other PA libels, it contains a grain of truth that has been distorted into a lie.

In 2001, an Israeli investigative journalist exposed that from the years 1988 to 2000, in violation of Israeli law, doctors at the Abu Kabir Institute of Forensic Medicine had taken body parts for research and transplants of skin and corneas without permission from the relatives. Most body parts were taken from Israeli Jews, but also from Israeli Arabs, Israeli soldiers, and Palestinian terrorists.

At the time, the institute was run by Professor Yehuda Hiss, who was personally involved in the scandal. Hiss was removed from his position as director but remained as chief pathologist until later investigations uncovered that he had continued his misconduct, which led to his dismissal from the Institute by the Ministry of Health in May 2012.