Weaponizing Food: How Condé Nast Transformed an Israeli City Into a Palestinian Town A general view shows an empty plaza outside the Greek Orthodox Church of the Annunciation, in Nazareth, northern Israel March 15, 2020. Photo: REUTERS/Rami Ayyub.

Condé Nast, the global media conglomerate that owns Vogue and The New Yorker, published a piece this month, titled “The Unsung Food Destinations to Travel for Now,” which completely severs the connection between the city of Nazareth and the country where it’s located: Israel.

Meanwhile, the Condé Nast Traveler feature deems the inhabitants of this Biblical town, associated in the New Testament as the home of the boyhood Jesus, as “Palestinian.”

The story, which purports to explore some of the great local food and flavors from around the world, portrays Nazareth this way:

…where Palestinian cooks, bakers, and producers proudly continue centuries-old traditions. At Elbabour, neighbors thumb earthy za’atar and tangy sumac, while at Almashedawi Bakery, regional staples like labneh and bitter greens are tucked into flatbread fresh from the taboon. And…skilled home cooks help the chefs at Luna Arabic Bistro turn out maqluba, an elaborate Palestinian dish of meat and rice—perfectly capturing a city where community and tradition are always on the table.

Yet this is how the Elbabour restaurant on its website describes its culinary offerings:

…a family business, lovingly handed down from generation to generation. Jarjoura and Tony Kanaza are the brothers who currently operate the Mill. They’re driven by the desire to promote a culture of authentic spices, based on the healthy, natural, and diverse Nazarethian-Galilean-Christian cuisine.

Regarding the Almashedawi Bakery, a visit to the Nazareth municipality website reveals a host of recommended establishments for those with a sweet tooth. Nowhere on this page is the word “Palestinian” used.

The anecdotal evidence above is indicative of a new reality. Data shows that most Arabs in Israel today self-identify primarily as “Israeli Arab” or “Israeli.” In fact, the Pluralism Index last year recorded a sharp decline in the number of people in Israel who consider their primary identity to be “Palestinian.”

The survey asked respondents to rate how much they agree with the phrase “I feel like a real Israeli.” Most Arabs responded that they either agree completely (65%) or somewhat agree (33%) with the statement.

Condé Nast has thus lumped Israel’s largest minority in with their Arab Palestinian brethren in the West Bank and the Hamas-controlled Gaza Strip. But a quick check of any map shows that the city is located in Galilee, north of the West Bank and well inside the so-called Green Line.

One may want to dismiss the inclusion of Nazareth and the exclusion of Israel — even though every other city cited in Condé Nast Traveler’s list also correctly lists its location country — as a simple case of sloppy journalism. The problem with that assumption is that Condé Nast subsidiaries have in recent months made a concerted effort to undermine Israel’s legitimacy.

Last year, Vogue Arabia posted an image of a flower-festooned Israel — labeled “Palestine”– on its Instagram page and website, alongside a caption that described the Israeli-Palestinian conflict as a “hot-button” issue. It claimed the illustration was created by a Turkey-based artist in response to “Palestine not being included in Google Maps.”

However, Google had already debunked the claim that “Palestine” was deliberately wiped off maps of the region, explaining that there was no general consensus on what a potential Palestinian state’s borders would be.

More recently, The New Yorker Magazine’s online crossword puzzle on February 2 included a clue that referred to the Negev as a “desert that covers more than half of Palestine.”

Bizarrely though, The New Yorker chose to exclude “Israel” from the hint, while including “Negev,” a Hebrew word describing the desert region framed by the Jewish state’s borders with Jordan and Egypt. 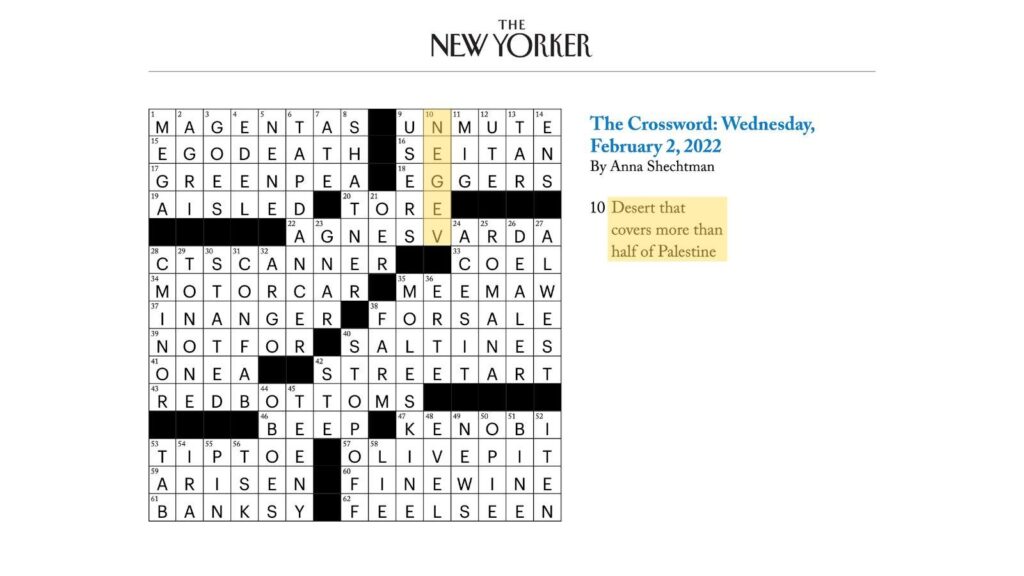 By inserting “Palestine” in its crossword puzzle — and thus depicting it as a viable, functioning entity — The New Yorker demonstrated its total lack of regard for established facts. Moreover, the publication, whose weekly circulation exceeds 1.2 million, is effectively legitimizing unilateral Palestinian efforts to achieve statehood while bypassing peace talks with Israel.

Italian chef Giada De Laurentiis once said that “food brings people together on many different levels. It’s nourishment of the soul and body; it’s truly love.”

On the other hand, Condé Nast’s blatant politicization of the Israeli city of Nazareth, and its reputation as a culinary destination, is almost certain to leave readers with a bitter taste in the mouth.