PA Increases Payments for Terrorists Who Killed US and Israeli Students Part of a collection of 110 manuscript pages written by Albert Einstein that were unveiled by Israel’s Hebrew University are seen on display at the university in Jerusalem, March 6, 2019. Photo: Reuters / Ronen Zvulun.

Almost exactly 20 years ago, Palestinian terrorists exploded a bomb in the Frank Sinatra cafeteria of the Hebrew University in Jerusalem murdering nine people, including five American citizens, and injuring over 80 others.

The attack was one of many terror attacks carried out by the same terrorist cell.

Four members of the terrorist cell that carried out the attack — Wael Qassem, Wassim Abbasi, Alla Aldin Abbasi, and Muhammed Odeh — were arrested in August 2002. Having now spent 20 years in prison, this month, the Palestinian Authority (PA) will give each of the terrorists a 14.29% raise in their basic salary, from 7,000 ($2,251) to 8,000 shekels/month ($2,572). Since the terrorists were residents of Jerusalem, the PA pays them an additional supplement of 300 shekels/month ($96).

Four of the other terrorists convicted for their part in the attack on the university, and other attacks, include Muhammad Arman, Walid Anjas, Abdallah Barghouti, and Ibrahim Hamed. Each of these terrorists is similarly receiving a monthly salary from the PA.

Palestinian Media Watch has received copies of official PA documents that prove the payment of terrorist salaries to a number of prisoners. Two of these documents referred to Arman and Anjas: 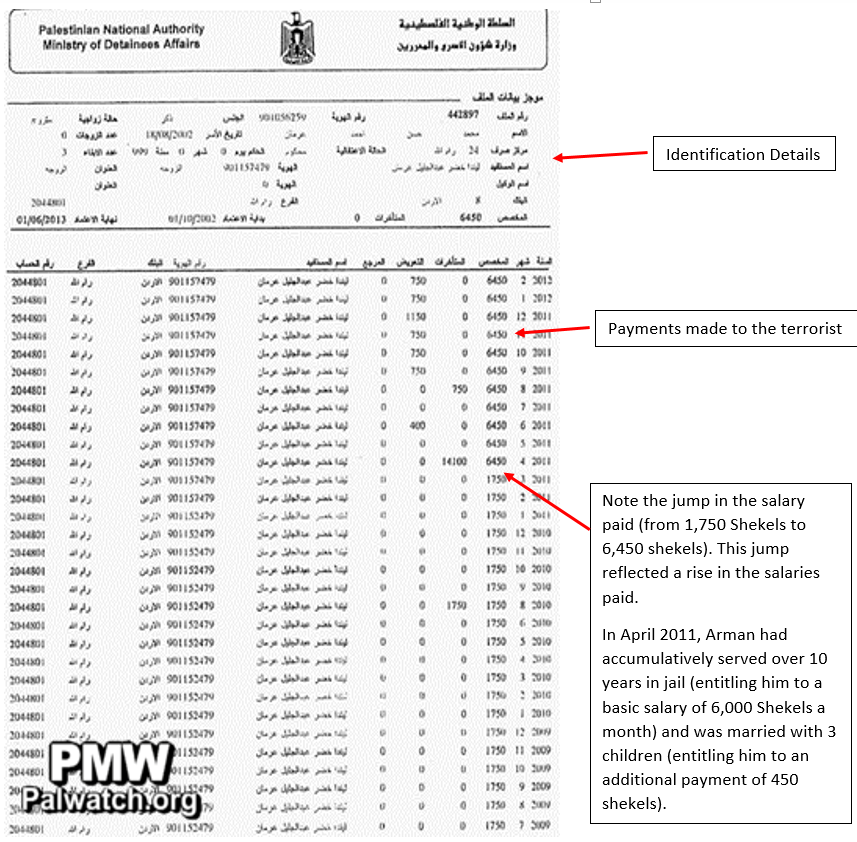 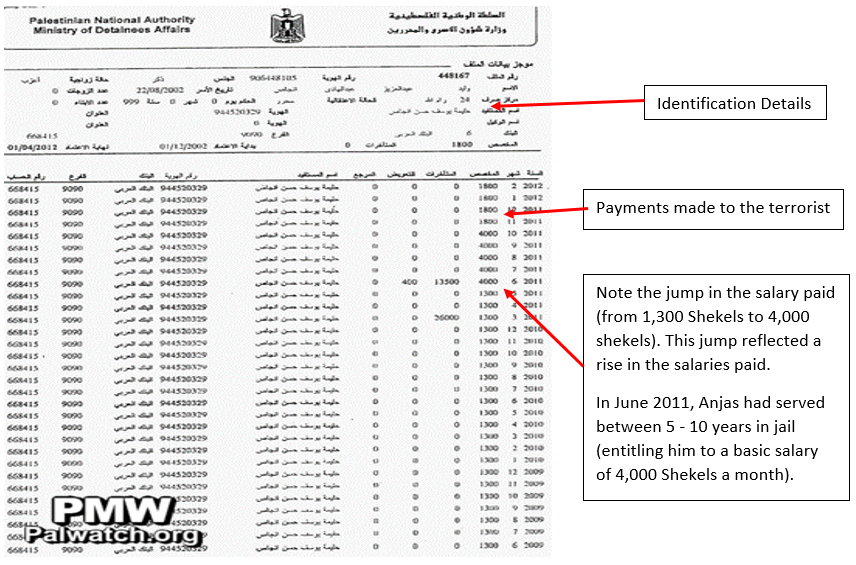 The PA records show that Arman was arrested in October 2002 and had previously spent four months in prison. Since Arman was married and had three children, the PA pays him an additional 450 shekels per month (300 shekels for his wife, and 50 shekels for each of his children). Accordingly, the PA is now paying Arman a monthly salary of 8,450 shekels ($2,716). To date, the PA has paid Arman 1,155,700 shekels ($371,607)

In other words, as a reward for their participation in terror and as a reward for murdering tens of people, the PA has paid these eight terrorists a cumulative sum of 8,022,600 shekels ($2,579,614).