Operation Breaking Dawn was a success, as far as Israel is concerned. After only three days, the top echelon of Gaza’s second-largest terrorist organization, Palestinian Islamic Jihad (PIJ), was decimated. Two of its key leaders are now dead, and many of its bases and weapons factories have been destroyed.

Even better, there were relatively few civilian casualties.

On the international front, the muted response of the Arab world to Operation Breaking Dawn highlighted the growing acceptance of Israel by governments across the Middle East.

In part, the relative lack of pressure on Israel can be attributed to an innovative, agile strategy that thoroughly debunked false reports that the Jewish state had killed a group of children in Jabalya, when in fact, their lives ended as a result of an errant Islamic Jihad rocket.

Yet while this concerted effort to hold international media outlets accountable for the quality of their reporting is an encouraging development, several headlines in connection to Jerusalem’s attempt to protect citizens from over 1,000 rockets that were launched by PIJ show that a bias against Israel exercising a fundamental right to defend itself persists.

Headline 1: Alleged terrorists. Unlike their depiction in the international media, the strikes launched by Israel weren’t against alleged terrorist targets, as the below headline by ABC News implies.

Rather, in response to credible intelligence of an imminent threat emanating from the PIJ in Gaza, the IDF launched a series of airstrikes across the Gaza Strip that targeted Palestinian Islamic Jihad members and infrastructure:

Headline 2: Removing Palestinian Islamic Jihad from the conflict it started. The BBC, a media outlet viewed by over 400 million people every week, failed in this headline to connect the dots between PIJ’s plans to launch terror attacks against Israel, and Jerusalem’s response to that threat.

The Iranian-backed group has also increased its coordination with Hamas in recent months. The BBC’s poor choice of words makes it appear as if Israel’s actions in Gaza took place in a vacuum, and are thus an act of aggression:

Headline 3: Confusing cause with effect. The New York Times suggests that Israeli airstrikes were the cause of violence emanating out of the Gaza Strip. In reality, the coastal enclave is hub of terrorist activity. Gaza’s rulers, Hamas, have repeatedly been caught plotting to launch attacks against Israel in recent months (see here and here).

Regarding Palestinian Islamic Jihad, as recently as August 3, the IDF conducted a West Bank raid in order to arrest a senior PIJ commander who had previously organized numerous acts of terror: 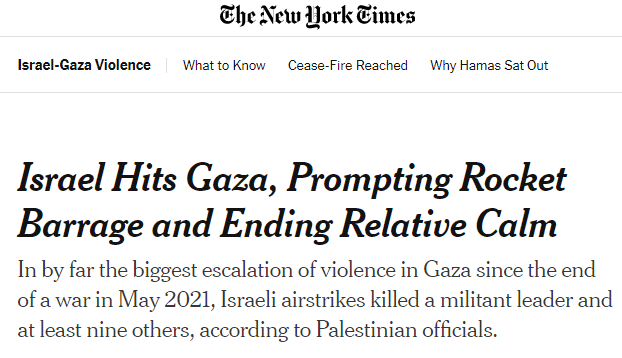 Headline 4: No difference between terror groups and elected governments. This headline by the Financial Times, a leading global business publication, engages in a form of moral equivalence by not mentioning which side — Israel — was acting to prevent the other side, Palestinian Islamic Jihad, from launching a massive attack against Israeli citizens.

Such a negation effectively normalizes terrorist organizations by placing them on the same moral plane as democratically-elected governments:

Someone reading this and no other part of the report would never know, for example, that Israel’s Iron Dome missile defense system shot down approximately 97 percent of the rockets launched by Palestinian Islamic Jihad. Many thousands of lives, Israelis and Gazans, were saved as a result:

Meanwhile, PIJ committed a double war crime by both targeting Israeli population centers and launching its attacks from civilian structures inside Gaza. Indeed, close to one-third of the Palestinians who died in the latest outbreak of violence may have been killed by errant rockets fired by Palestinian Islamic Jihad.

Headline 6: Distortion of reality. The same false equivalence is evident in this NBC News headline, which implies that both parties to the latest Gaza conflict are equally culpable. This, even though Operation Breaking Dawn was authorized due to an alert of an imminent attack, with the PIJ seeking to avenge the recent arrest of its West Bank leader: 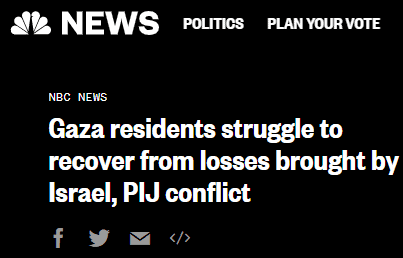 At a time when roughly eight-in-ten Americans get their news from digital devices, headlines are often the first and last thing people read regardless of the story.

Headlines are also the part of a news item that tends to be shared most on social media.

Accordingly, by failing to adequately convey the facts about Israel’s latest battle against terror — especially in headlines — news organizations are warping the real situation and, as a corollary, diminishing the threat and consequences of terrorism not only to the Jewish state, but to every nation across the globe.