On August 11, HonestReporting put a spotlight on the violent and antisemitic social media history of Fady Hanona, a freelance producer and fixer who was credited by The New York Times in multiple stories published this month.

“I don’t accept a Jew, Israeli or Zionist, or anyone else who speaks Hebrew. I’m with killing them wherever they are: children, elderly people, and soldiers,” Hanona had said, adding: “The Jews are sons of the dogs … I am in favor of killing them and burning them like Hitler did. I will be so happy.”

In response to our exposé, The New York Times, VICE News, the BBC, The Guardian, SBS Australia, and ABC News Australia all moved to cut ties with Hanona.

Today, we can reveal that the “newspaper of record” worked with at least two more Palestinians who lauded Adolf Hitler and Palestinian terrorism.

Following our correspondence with the NYT, a spokesperson in New York told HonestReporting on Monday that the paper is looking into the disturbing social media posts by Soliman Hijjy and Hosam Salem.

Between 2018 and 2021, freelance filmmaker Soliman Hijjy (also spelled Sulaiman Hejji) worked on several of The New York Times’ “visual investigations,” including ‘”Gaza’s Deadly Night: How Israeli Airstrikes Killed 44 People” — a slanted June 2021 video that was the subject of an HonestReporting critique.

Hijjy was hired by The New York Times even though his hatred of Jews and the Jewish state may well have impaired his ability to carry out assignments — which included selecting “potential interview subjects and witnesses” — without bias.

Case in point: in November 2012, Hijjy praised Adolf Hitler on Facebook. “How great you are, Hitler,” the freelance journalist wrote on the social media site, sharing a meme featuring the Nazi mass murderer.

Six years later, on December 26, 2018, he doubled down: in a caption accompanying a picture of himself, Hijjy stated he was “in a state of harmony as Hitler was during the Holocaust.” 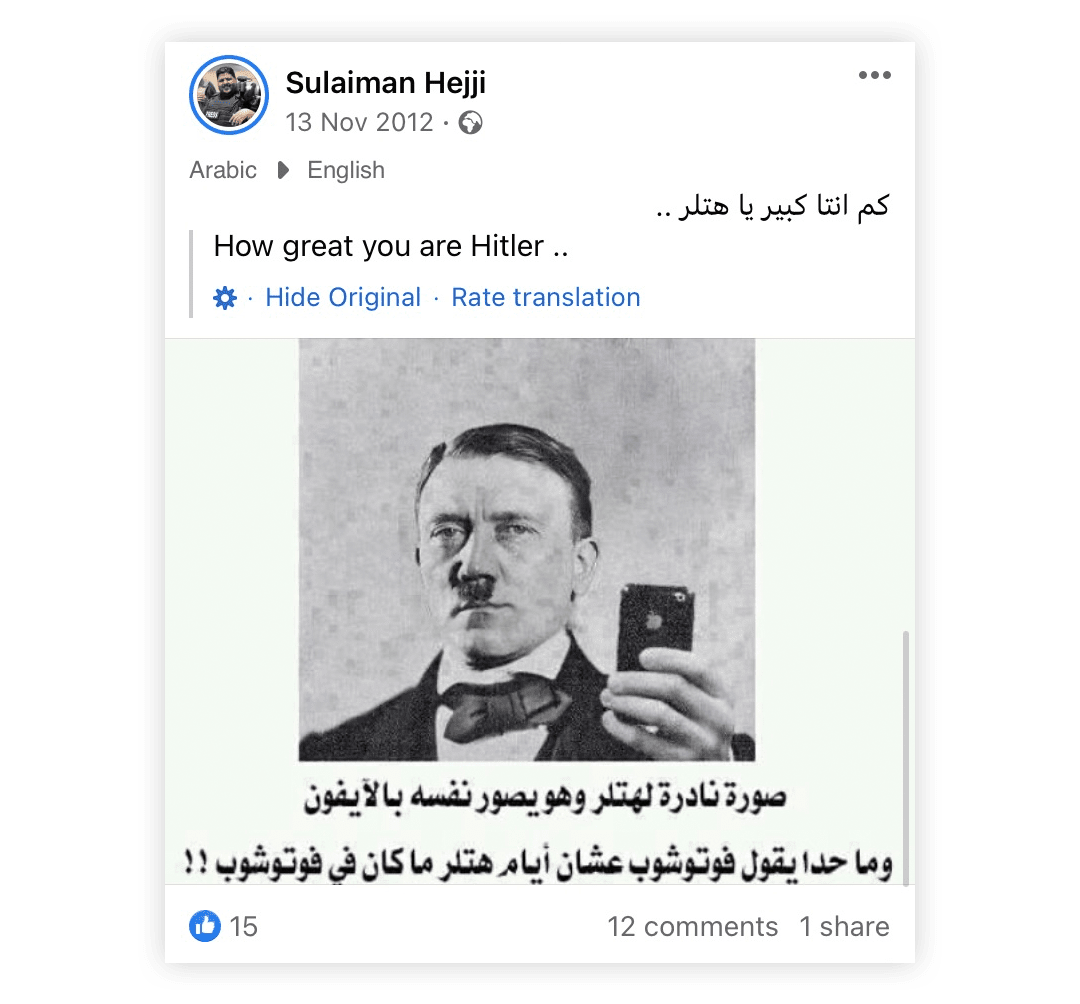 Notably, Hijjy published his vile post only four days before the Times ran “A Day, a Life: When a Medic Was Killed in Gaza, Was It an Accident?,“which credits him as a videographer.

Hijjy again shared the text in late 2020, mere months before NYT rehired him to report on the May 2021 conflict between Gaza Strip-based terrorist groups and the Israel Defense Forces (IDF).

In addition to his admiration for Nazism, Soliman Hijjy seems to be a mouthpiece for the US-designated Hamas terror organization that controls the Gaza Strip.

On more than one occasion, he has justified war crimes against Israeli civilians by describing indiscriminate rocket attacks as “resistance” (see, for example, here and here), in one instance even referring to the Israeli city of Ashkelon as “occupied al-Majdal.” 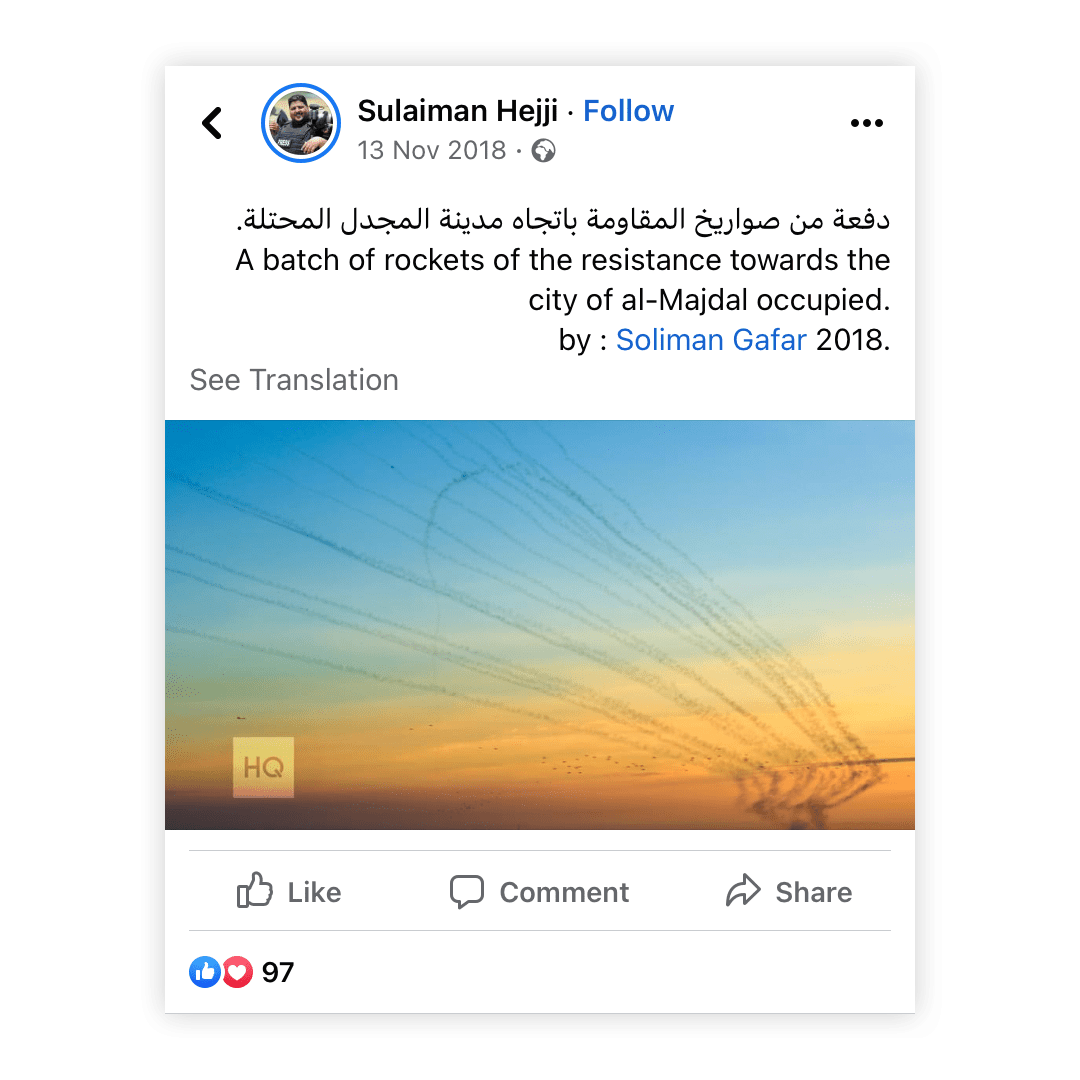 A picture is worth a thousand words, but which words? That often depends on, among other factors, what the photographer decides to include — or omit — in the image.

Hosam Salem has worked as a photographer for The New York Times since 2018, most recently having been commissioned by the newspaper to document this month’s escalation between Israel and the Palestinian Islamic Jihad terror group.

While working for mainstream outlets, Salem publicly glorified Palestinian terrorist attacks that killed a total of at least 35 innocent Jews, Muslims, and Christians. The New York Times freelancer has rejected appeals to end the bloodshed, while he explicitly rebuffed any possibility of peace with Israel.

In 2011, Salem took to Facebook to praise the Jerusalem bus bombing, in which British Christian evangelical student Mary Jane Gardner was murdered, and 67 others were injured. Members of the Hamas cell had reportedly planned an additional attack but were stopped by Israeli security forces. 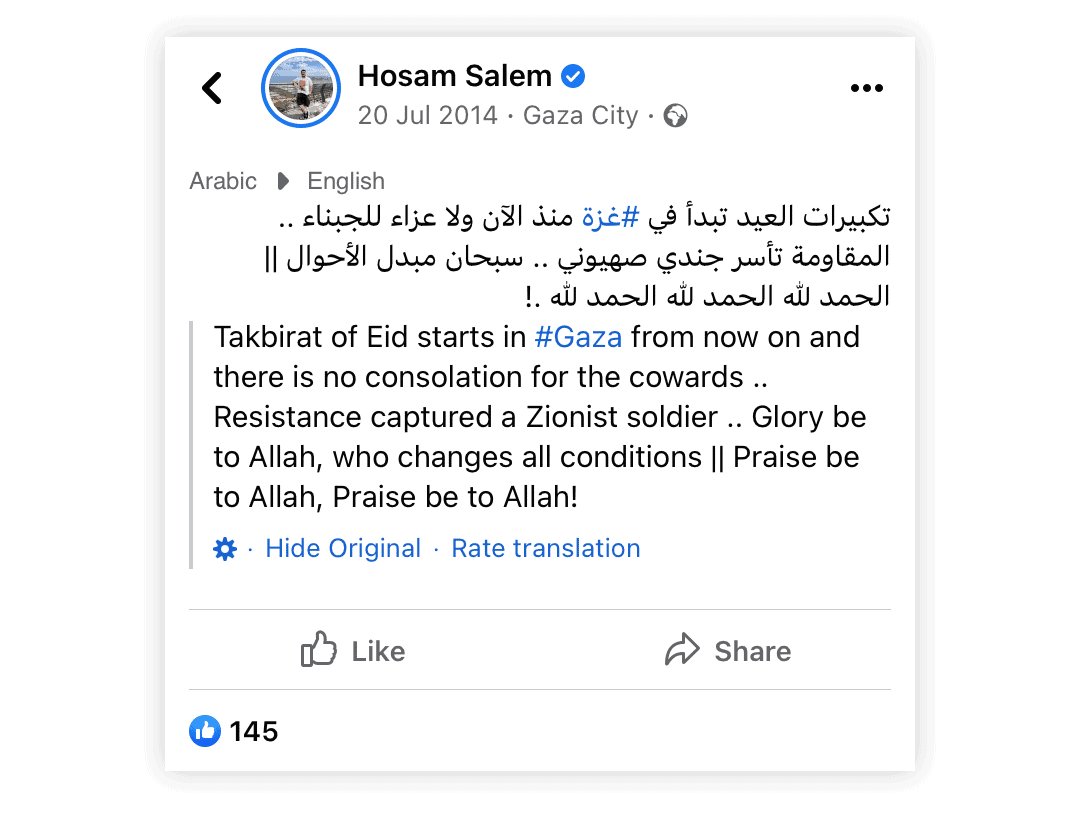 During 2014’s Operation Protective Edge against Hamas in Gaza, Salem used his profile to hail the terrorist organization’s capturing and killing of IDF soldier Oron Shaul. For more than eight years, Hamas has held on to Shaul’s body, using his remains as a bargaining chip to secure the release of Palestinian security prisoners jailed in Israel.

Around the same time, the photographer mourned Salam Maher al-Madhoun, a Hamas operative sent to carry out a mass killing in the southern Israeli community of Nir Am. Al-Madhoun’s terrorist cell managed to kill four IDF officers and soldiers before being neutralized.

Then, on November 18, 2014, Hosam Salem again used Facebook to express his joy over the massacre of four rabbis and an Israeli-Druze police officer in a synagogue in the Jerusalem neighborhood of Har Nof.

Citing the Koran, he encouraged his followers to “smite the necks” of unbelievers, adding: “[This is the] summary of the Jerusalem operation [sic] today.” 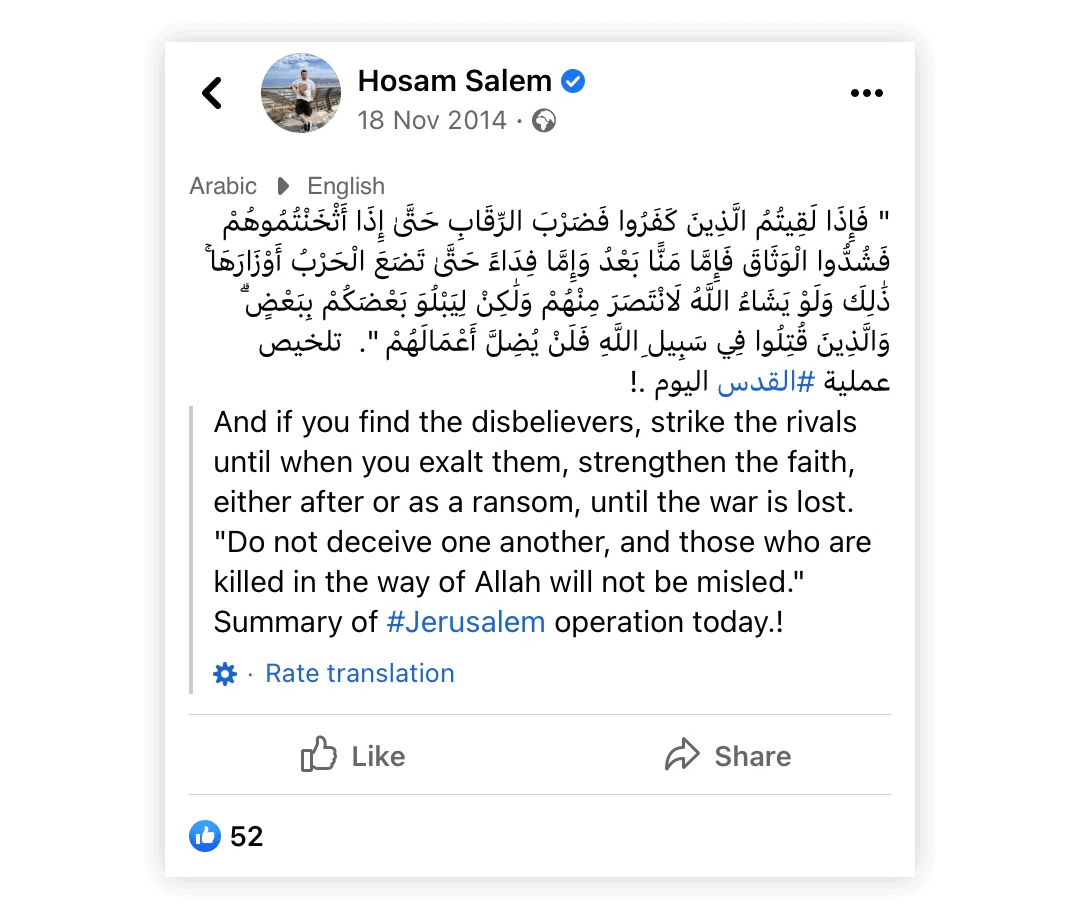 In 2015, Salem applauded two acts of terror (see here and here); a shooting at the Gush Etzion Junction that killed an American teenager, an Israeli man, and a Palestinian bystander; and a Jerusalem stabbing that killed three.

Some three years later, after being hired by The New York Times, Salem called for more violence following an attack that killed two IDF recruits in the West Bank. “Shoot, kill, withdraw: three quick operational steps … to bring peace to the hearts of sad people like us,” the inciting post read.

Finally, he has repeatedly eulogized Mohammed Salem and Nabil Masoud. The two were responsible for a 2004 suicide bombing that killed 10 workers at the Ashdod port, Israel’s second-busiest harbor (see here and here). 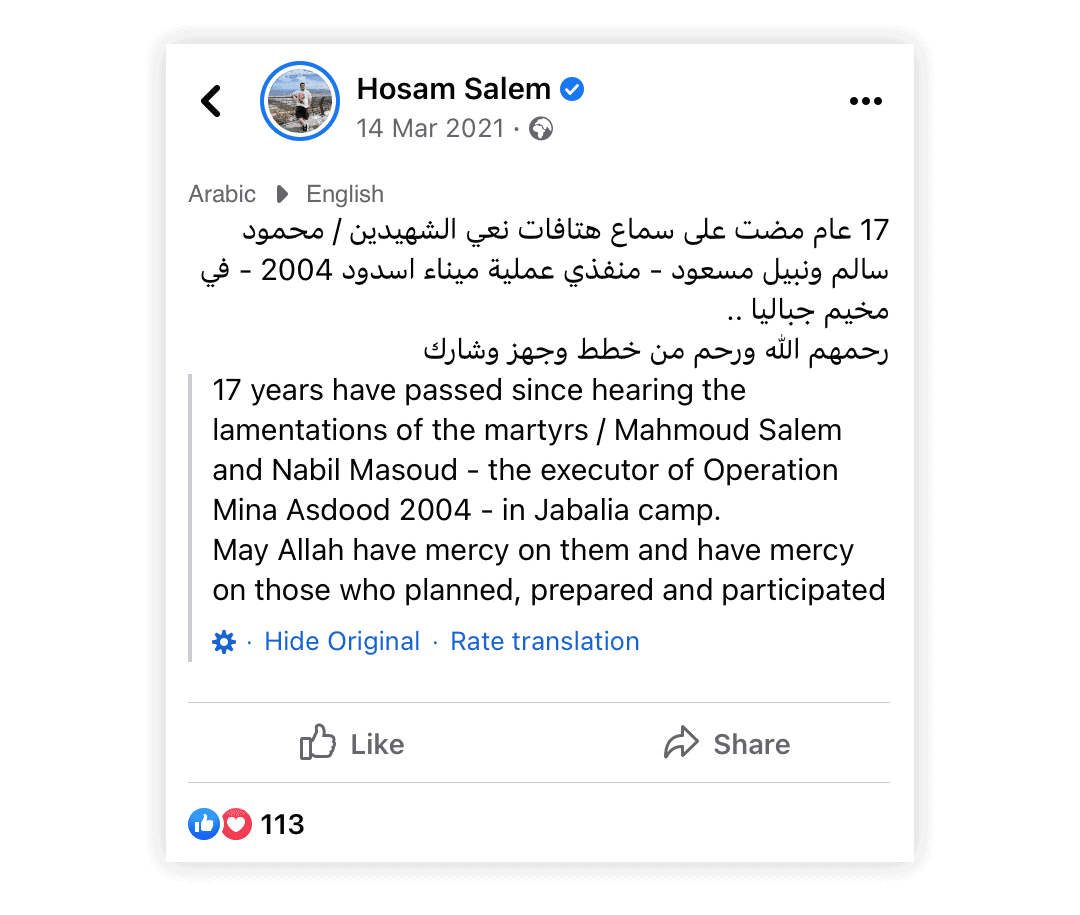 While the NYT’s swift response is to be commended, the incident casts serious doubt on the media’s ability to properly vet their local workers and sources. Seemingly, multiple news outlets failed to take notice of the antisemitic past of these local hires.

Hanona, Hijjy, and Salem are not unfortunate exceptions. In fact, they are only the most recent, egregious examples that we have uncovered in our role as a media watchdog. In the last year alone, HonestReporting’s investigative work has resulted in multiple journalists being fired or no longer featured by The New York Times, CNN, The Washington Post, and the BBC, who fired Tala Halawa after we revealed that she tweeted “Hitler was right.”

As we continue to fight for accuracy and fairness in reporting on the Arab-Israeli conflict, together, we will ensure that journalists are properly held accountable.