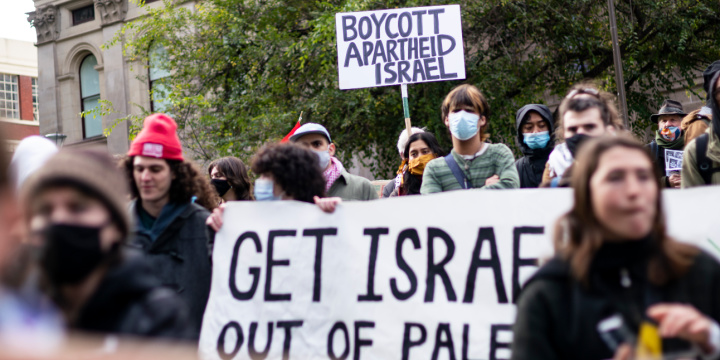 Iran ranks among the world’s greatest destabilizing and oppressive forces. Its nuclear weapons program could one day realize leaders’ oft-stated goal of wiping Israel off the face of the earth. At the very least, a nuclear Iran could spark a Middle East arms race.

Meanwhile, the Islamic Republic continues to finance terrorist groups — especially those that seek to kill Israelis and their supporters — with hundreds of millions of dollars. That figure stands to skyrocket if Iran wins sanctions relief in a new nuclear deal with the West.

To Ali Abunimah, who co-founded the highly-visible website Electronic Intifada, this Iranian support is just fantastic.

“And I only hope that that is true because Islamic Jihad is a legitimate resistance group engaged in resistance against a brutal and illegitimate occupation,” Abunimah said during an Aug. 14 appearance on an online program called “Freedom Side.” 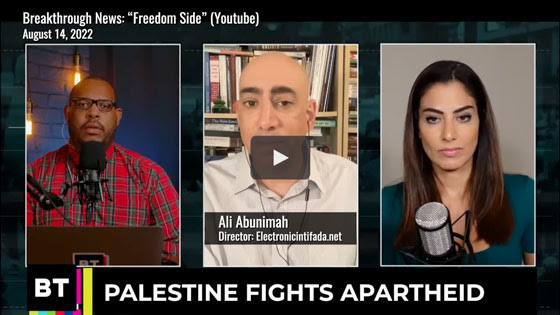 Palestinian Islamic Jihad (PIJ) targets civilians and seeks mass casualty attacks. Its by-laws call for creating “a state of terror, instability and panic in the souls of Zionists and especially the groups of settlers, and forc[ing] them to leave their houses.” It also rejects “any peaceful solution for the Palestinian Cause, and [affirms] the jihad solution and the martyrdom style as the only option for liberation.”

The problem for Abunimah and those who share his views is that more countries are seeing the value in moving away from such animosity and making peace with the Jewish state.

Even Turkey is restoring full diplomatic relations with Israel — at least until Islamist President Recep Tayyip Erdogan gets angry again.

These countries, like most others, act out of self-interest. The trade helps their economies. And Israel’s technological advances can aid their economies and help keep their people safe.

As Muslim-majority countries outside of Iran’s Shiite axis move toward peace, Abunimah and other Palestinian advocates double down on their hope that Israel can be eliminated.

The program Abunimah spoke on last month carried the false title, “Palestinians Have Tried Surrender & Collaboration. Only Resistance Is Left.”

But it can negotiate its way to peace, as the Abraham Accords and previous agreements with Egypt and Jordan show.

“We believe that the best way to address challenges is through cooperation and dialogue and that developing friendly relations among States advances the interests of lasting peace in the Middle East and around the world,” the Abraham Accords declaration says. “We seek tolerance and respect for every person in order to make this world a place where all can enjoy a life of dignity and hope, no matter their race, faith or ethnicity.”

At virtually every event, they chant for the country’s elimination: “From the river to the sea, Palestine will be free.”

And other chants make it clear they’re not interested in doing it peacefully: “From New York to Gaza, globalize the intifada.”

Nerdeen Kiswani, who was recently honored by being chosen to speak at the CUNY law school commencement, created an organization called “Within Our Lifetime” — as in, Israel will be eliminated “within our lifetime.”

The organization rejects “all collaboration and dialogue with zionist [sic] organizations through a strict policy of anti-normalization. The liberation of Palestine requires the abolition of zionism.” [Emphasis original]

During a recent rally at New York’s Washington Square Park, Kiswani accused “every single university in New York City” of being “complicit in Zionism” because they don’t boycott Israel.

“These universities, when they have exchange programs with the settler state, they are co-signing, they are complicit in the genocide of the Palestinian people,” she said.

No speaker mentioned China and its genocide of Uighur Muslims; Russia and its ongoing attempt to erase Ukraine; or Iran and its attempts to kill dissidents and US government officials.

The only genocide mentioned was the non-existent one Kiswani accused Israel of carrying out.

“Zionism must fall!” people chanted. “From the river to the sea Palestine will be free.” In Arabic, they also chanted, “The gate of al-Aqsa is made of iron, only a martyr can open it.”

A speaker from the group Samidoun: Palestinian Prisoner Solidarity Network identified as Leila said that Palestinian detainees in Israeli jails “suffer more than anyone else anywhere in Palestine or anywhere in the world.”

Leila, if you’re reading, the Uighurs and so many others would like a word.

This is how disinformation works. People repeatedly spout demonstrably false assertions about Israel, including the genocide charge.

During his “Freedom Side” appearance, Abunimah criticized Israel for targeting terrorist leaders, including from the Palestinian Islamic Jihad, as the group continued to plot attacks on Israeli civilians. But to Abunimah, it was something far more sinister than an act of self-defense.

“The regular shedding of Palestinian blood is a necessary component of maintaining Israel,” he said.

This kind of dehumanizing rhetoric — genocide by a country thirsty for Palestinian blood — allows calls to wipe out an existing country seem less extreme. In that lens, “martyrs” and terrorism, sugarcoated as “resistance,” becomes righteous. 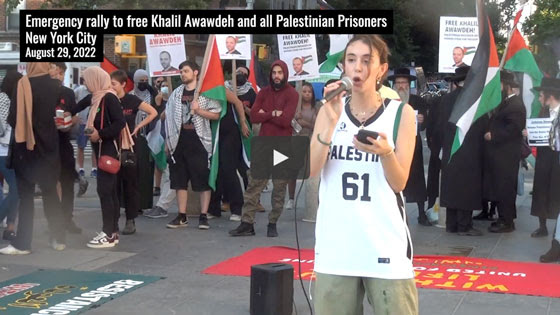 “Zionist pigs are every bit responsible for the genocide of Palestinians,” an unidentified speaker said at the New York protest. “We reject all attempts to criminalize our resistance that we uphold by any means necessary. Glory to our martyrs, freedom to our prisoners, and long live the resistance.”

Perhaps the most disturbing aspect of this kind of incitement is how common it is, and how comfortable anti-Israel voices are sowing more hatred and calling for more bloodshed. We have shown countless examples of prominent, supposedly mainstream Palestinian advocates pushing antisemitic conspiracy theories and blood libels.

This incessant demonization is not acceptable in any other political dispute. We cannot become numb to its frequency and allow it to be accepted here.