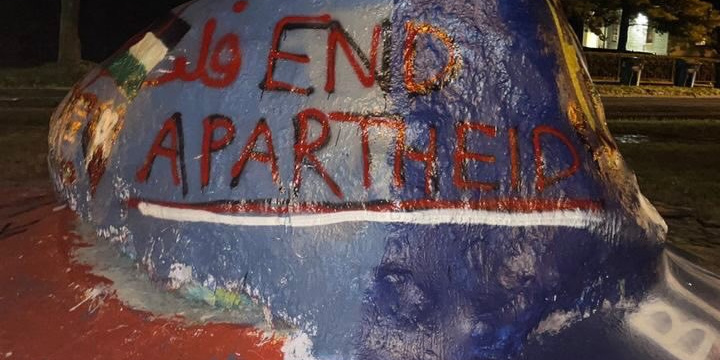 Antisemitic graffiti sprayed on “The Rock” at University of Michigan. Photo: Twitter.

Students at the University of Michigan last Thursday erected an “apartheid wall” on campus and led an anti-Israel protest in front of it.

Organized by Students for Allied Freedom and Equality (SAFE), the demonstration coincided with observance of the Jewish New Year.

“It is an apartheid wall and actively contributes to the systems of apartheid, ethnic cleansing, and forced displacement that harms Palestinians every single day,” a student, who declined to reveal her identity, told The Michigan Daily. “The wall separates family members from one another, children from their schools, men and women from their jobs, and sick people from the nearest hospitals.”

Others, one of whom made a sign that said “No Justice, No Peace,” accused the Israeli government of aiming to harm American pro-Palestinian activists, denounced Canary Mission, an antisemitism watchdog, and criticized the university for refusing to embrace the boycott, divestment, and sanctions (BDS) movement.

“Unfortunately the groups that don’t support Palestine have been able to blacklist Palestinian allies and activists on this campus,” sophomore Bilal Irfan said. “SAFE has been advocating for divestment for almost two decades now for the University, but the Board of Regents has persistently refused to do that.”

Some University of Michigan students approached the protestors and urged them to become fully apprised of the complexities of the Israeli-Palestinian conflict, The Michigan Daily reported. Standing atop a nearby structure, they made a “thumbs-down” gesture when they perceived the protestors’ remarks as offensive or lacking nuance.

Antisemitic activity on and around the University of Michigan has increased since Jewish holidays began last week. On Wednesday, president Mary Sue Coleman confirmed that antisemitic flyers attributed to the Goyim Defense League (GDL), an extremist fringe group, were dropped at homes in its neighborhood.

The university was also flagged in a recent report by StopAntisemitism, a US-based nonprofit, for being hostile to Jews and indifferent to their safety.