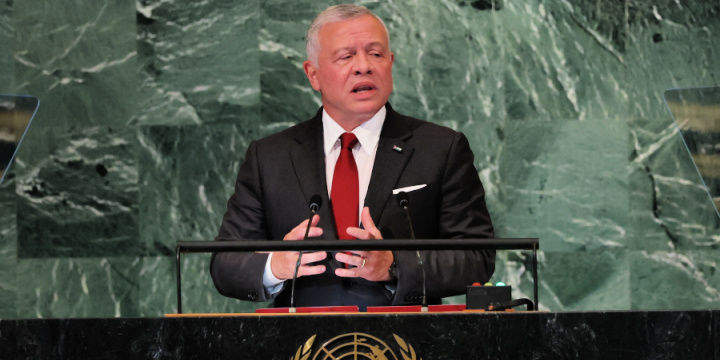 After hearing what Jordan’s King Abdullah II had to say at this year’s meeting of the United Nations General Assembly two weeks ago, I didn’t know if my reaction should be one of laughter or anger. The Jordanian monarch used his speech at the General Assembly to blast Israel for attacking Christianity in Jerusalem. “The rights of churches in Jerusalem are threatened,” he said. May I say, the Hashemite ruler has a lot of chutzpah.

I believe a review of Jordan’s historic treatment of religious minorities and their institutions is in order. When the Jordanians occupied eastern Jerusalem from 1948 to 1967, they destroyed the Jewish Quarter of the Old City and expelled its inhabitants. They also destroyed more than 50 synagogues. Some Jewish religious sites were turned into animal stalls. The Jordanians also desecrated many Jewish graves on the Mount of Olives, where Jews have been burying their dead for more than two millennia. As a matter of fact, some tombstones from the Mount of Olives were even used to build latrines for Jordan’s Arab Legion. For 19 years, Jews were forbidden from accessing their holy sites.

What about Christians? Could they access their holy sites freely? I wish I could say that this was the case, but it was not.

The Jordanians imposed severe restrictions on how many Christian pilgrims could enter Jerusalem or Bethlehem, the birthplace of Jesus. During the 1950s and 1960s, Jordan passed laws curtailing the rights of Christians in the country. Laws were passed to exert governmental control over Christian religious schools. These laws imposed restrictions on the opening of new Christian schools, as well as government control over school finances and the appointment of teachers. The Christian schools were even forced to teach the Islamic Koran to their students. Jordan also banned Christian religious and charitable organizations from purchasing real estate in Jerusalem. The measures that Jordan took to restrict Christians’ freedom of religion pushed many Christians to leave the holy city. Indeed, between 1949 and 1967, the Christian population of Jerusalem was nearly halved.

Clearly, the Jordanians have a poor record when it comes to safeguarding the rights of non-Muslims. Thus, it is quite hypocritical for the current Jordanian monarch to criticize Israel’s policies on religious freedom, especially since the Jewish state lifted the aforementioned discriminatory laws imposed on non-Muslim religious minorities once it assumed control over the West Bank and reunified Jerusalem.

The Palestinians could have had a country of their own as far back as 1921, when the British literally handed the territory of their Mandate of Palestine east of the Jordan River to King Abdullah II’s Hashemite clan, instead of giving it to the Palestinian Arab population for which it was originally intended. Then, during the 1948 war, the Jordanians captured what they labeled the West Bank, including eastern Jerusalem and all its holy places. But did they end up giving this territory to the Palestinians so that they would have a country of their own? Nope. Instead, the Jordanians annexed the newly-conquered territory — an annexation that was not even recognized by the other Arab states.

The bottom line is that King Abdullah II and his Hashemite clan have stood in the way of Palestinian statehood, not Israel. The king’s diatribe about a two-state solution is as hypocritical as his argument that the Jewish state threatens the rights of Christians. Besides, without Israeli support, the Jordanian monarch would probably not have his kingdom, so I think it’s time he stopped biting the hand that feeds him.

The author is a freelance writer.