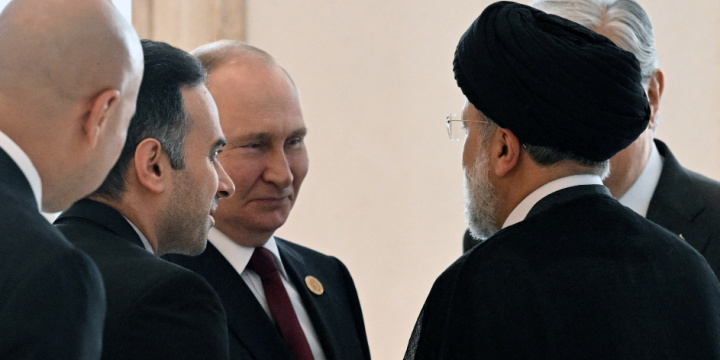 JNS.org – We’re inclined to believe that those who rule nations, however despotic they may be, are not so different from us. Surely, they weigh costs and benefits, are open to compromise and prefer peace to war. Does the evidence support this belief? I don’t think so.

Recall President Trump’s approach to Kim Jong-un. He told the North Korean dictator that if he’d only adopt more moderate policies, he could have “prosperity like he has never seen” and become “the hero of his people.” Trump communicated, too, that if Kim declined this offer, he might find American missiles raining down on his head.

Wouldn’t you have been tempted by that carrot and frightened by that stick? Sure. But Kim is not like you.

Protest on the soccer pitch has proven to be a mixed blessing for Qatar, exposing double standards in the Gulf...

He didn’t understand that, for Supreme Leader Ali Khamenei, “Death to Israel!” and “Death to America!” are not just slogans. They are goals of the revolution to which he has dedicated his life. He will do whatever is necessary to achieve these goals—including, at this moment, murdering, torturing and imprisoning Iranian women who have had quite enough of his soul-crushing interpretation of Islamic law.

President Biden and his advisers have denounced Khamenei’s brutality. But they continue to offer him billions of dollars to agree to a watered-down version of the Joint Comprehensive Plan of Action that won’t seriously impede the regime’s nuclear ambitions. It will, however, finance terrorism abroad and atrocities at home. So, why doesn’t Khamenei take the deal?

He may think he can still get more. Or he may not want even to appear to be on the same page with satanic Americans. He’s not like us and he wouldn’t want anyone to think he is.

Turn next to Vladimir Putin. As I’ve long argued, he fancies himself a latter-day czar. His goal is to restore the Russian empire which, in the bellicose Kremlin speech he gave last week, he called “great historical Russia.”

He had been making progress toward this goal. In 2008, he cut two provinces from Georgia. In 2014, he seized Crimea from Ukraine and began an insurgency in Donbas. Belarus and Armenia have become Russian satellites.

Back in February, many analysts doubted he’d invade Ukraine, because saber-rattling alone would almost certainly have resulted in restrictions on Ukraine’s sovereignty—a clear win for him.

When he did send tanks over the border, many analysts expected only a “limited incursion” which the United States and its allies could earnestly deplore and then rapidly forget.

But it turned out that Putin was no longer content with salami slicing. He believed—as did most Western military analysts—that his troops would easily overrun the Ukrainian army and subdue the Ukrainian people who, he insists, are nothing more than disobedient little brothers who deserve to be punished for refusing to return to the Fatherland.

Instead, of course, Ukrainians have fought, with astonishing courage and skill, to defend their lands and independence. Volodymyr Zelensky, a comedian turned politician, emerged as their inspiring leader.

In his most recent Kremlin speech, Putin announced that he is annexing Donetsk, Luhansk, Zaporizhzhia and Kherson—Ukrainian territories where he staged fraudulent plebiscites and where his forces are, at this moment, losing ground.

He also gave vent to grievances he has been nursing for years while gazing at the Black Sea from inside his Italianate palace.

He denounced “the ruling circles of the so-called West” as “the enemy.” He accused “the Anglo-Saxons” of sabotaging “the Nord Stream international gas pipelines.” (My guess: He blew them up himself so he can allege that he’s been directly attacked by the United States and/or NATO. He may also be contemplating additional sabotage of undersea infrastructure.)

He recited standard leftist dogma about slavery, genocide, “Western racists,” the American “neocolonial system,” “totalitarianism, despotism and apartheid.” For good measure he threw in “the plunder of India, of Africa, the wars of England and France against China.” He said the United States “occupies” Germany, Japan, and South Korea.

Then, reaching out to Western conservatives, he added: “Do we really want … it drilled into children in our schools … that there are supposedly genders besides women and men, and [children to be] offered the chance to undergo sex change operations?”

If you’re so credulous as to believe Vladimir Putin is the man to lead the counter-revolution against Wokeism, there’s a bridge over the Dnieper River whose purchase I can facilitate for you.

Most ominously, Putin declared that the territories he is annexing are now Russian lands, implying he might use nuclear weapons to defend them. He claimed that America’s use of such weapons in 1945 had “created a precedent.”

I understand the desire, on both the left and the right, for “a diplomatic solution.” I understand why many people believe that Putin must want an “offramp”—because that’s what they’d want if they were in his place.

But nothing he has said or done to date indicates that’s true.

And if he finds that his threats are causing the West to retreat, would he be satisfied—or emboldened?

If he sees that Western leaders are giving appeasement a chance, why would he not continue to advance, probing with his spear so long as he feels mush, not steel? Why would he end a war he believes he is winning?

And what lessons will the despotic rulers of North Korea, Iran and China take away based on our actions or inaction, the risks we take and the risks we avoid? Because, let me remind you, they are not like us.