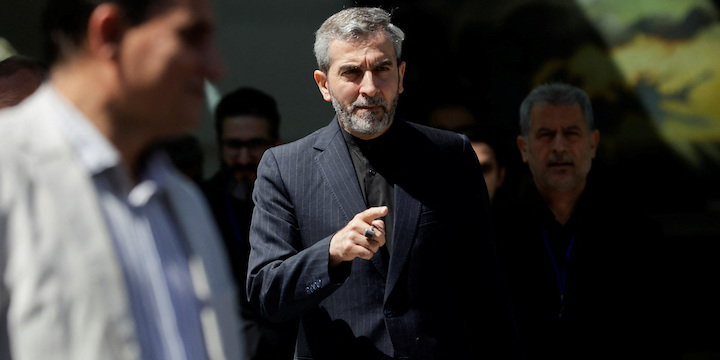 In an interview recorded a week before his New York trip for the UN General Assembly, Iranian President Ebrahim Raisi cast doubt on the Holocaust, adding to a long pattern of antisemitism and Holocaust denial from senior Iranian leaders. While Raisi was delivering his speech to the United Nations, protestors across Iran were on the streets denouncing the Islamic Republic for the regime’s murder of 22-year-old Mahsa Amini for not adhering to the country’s strict dress code. Since then, the Iranian regime has killed at least 154 protestors, and true to form, Supreme Leader Ali Khamenei trafficked conspiracy theories, blaming Israel and the United States for protests, rather than admitting responsibility. While diplomatic efforts continue on the sidelines, these outrageous developments are a grim reminder of the nature of the Iranian regime, all while its officials continue to press for sanctions relief in exchange for a new nuclear deal.

As the CEO of ADL, the world’s leading anti-hate organization, I feel strongly that any diplomatic engagement with Iran must address the full range of Iranian aggressions. Simply put, in addition to being a source of extremism and instability across the Middle East and beyond, the Iranian regime is also the world’s leading state-sponsor of terrorism, antisemitism, and Holocaust denial.

Tehran has not only carried out terrorist attacks targeting Jewish communities around the world from the Middle East to Latin America, but is also committed to a genocidal mission to wipe Israel “off the map.”

We must take all of Iran’s threats seriously.

A flawed deal may provide Tehran and its terrorist proxies with leeway and funds to advance their aggressions, which threaten people around the globe, including Jewish communities and the state of Israel.

We are particularly concerned that any deal would provide the Iranian regime, the Islamic Revolutionary Guard Corps (IRGC), and its terrorist proxies — namely Hezbollah, Hamas, Palestinian Islamic Jihad, and the Houthi militia in Yemen — access to tens of billions of dollars in funds and the ability to procure more advanced weaponry to take innocent lives.

The ADL has long advocated for strong international action to address Iran’s full range of extremist policies, nuclear and non-nuclear, its state sponsorship of terrorism, worldwide propagation of antisemitism and Holocaust denial, and persecution of vulnerable minorities.

The key obstacle to the Iranian regime’s ability to implement its murderous plots over the last four decades has been the US commitment to push back legally, financially, diplomatically, and militarily, together with our allies and partners, including Israel. If not for robust American sanctions that severely undermine Tehran’s ability to fund its terror campaign and procure military and dual-use technologies and materiel, the regime’s victims list across the world would be much longer.

That is why any nuclear deal with Iran must impose rigorous monitoring, verification, and enforcement measures to ensure the regime cannot illicitly develop nuclear weapons, as it has repeatedly attempted in the past. It should also extend to imposing iron-clad constraints on the regime’s ballistic missile program. The IRGC and the network of companies it controls should enjoy no sanctions relief in any form. This must include a robust enforcement of secondary sanctions.

The US and its allies also need to target the regime’s soft power. This should begin with denying Iranian propaganda and incitement access to Western airwaves, including stronger sanctions against the Islamic Republic of Iran Broadcasting. We should also stand in solidarity with Iran’s pro-democracy movement and support the country’s vulnerable ethnic, religious, and sexual minorities against the regime’s brutal oppression.

Pushing back against Tehran’s soft power, however, is a task that cannot be delegated solely to the US government. As Iran intensifies its intimidation and incitement campaign through Western social media outlets, tech companies have a responsibility to shut down Iranian propaganda on their platforms.

Make no mistake: A nuclear deal with Iran will not transform the goals or values of this genocidal regime. Vigilance — from the state to the private sector, and from advocacy organizations to individuals — will continue to restrict Tehran’s ability to take lives, disseminate hate, and incite violence.

Jonathan A. Greenblatt is CEO and National Director of the Anti-Defamation League.