At 1:33 PM Israel time, when HonestReporting’s team was off observing the holiday, former New York Times freelance photographer Hosam Salem posted on Twitter that he had been fired a month earlier due to our reports about his social media posts.

“After years of covering the Gaza Strip as a freelance photojournalist for The New York Times, I was informed via an abrupt phone call from the US outlet that they will no longer work with me in the future,” he wrote, in a post that has already received more than 50,000 likes.

He portrayed himself as “expressing support for the Palestinian resistance against the Israeli occupation,” and warned of what he called “a systematic effort to distort the image of Palestinian journalists as being incapable of trustworthiness and integrity, simply because we cover the human rights violations that the Palestinian people undergo on a daily basis at hands of the Israeli army.”

HonestReporting’s editorial team could only respond when Yom Kippur ended, but those 50,000 people have had time to check what “resistance” Salem was referring to and realize that his claims cannot be further from the truth.

Many Palestinian journalists are capable, worthy of trust and integrity, and they should continue covering the plight of their people and the challenges posed to them by the Israel Defense Forces, just as other journalists from around the world do on a daily basis.

What journalists of any ethnicity or background should not do is call for the murder of innocent people of any faith, or praise such actions in any forum, as Salem repeatedly did on Facebook.

On August 24, HonestReporting revealed that the photographer publicly glorified Palestinian terrorist attacks that killed a total of at least 35 innocent Jews, Muslims, and Christians.

Do those 50,000 people realize that with their “like,” they were saying that praise for opening fire in a synagogue and killing people at prayer is “fit to print”?

The November 2014 murders at a synagogue in the Jerusalem neighborhood of Har Nof with axes, knives, and a gun were possibly copied by murderers at synagogues in Copenhagen, Denmark; Pittsburgh, Pennsylvania; Poway, California; and Halle, Germany; and could have happened in Colleyville, Texas, as well.

Jews have not been the only victims of shootings at houses of worship. Twenty-five people were killed in the November 2017 shootings at the First Baptist Church of Sutherland Springs, Texas. The death total in the March 2019 shootings at two mosques in Christchurch, New Zealand was 51.

Salem, too, has not limited his praise for murder to Jews. After a Druze police officer was killed in the Har Nof attack, the photorapher called on his followers to “smite the necks” of “unbelievers.” In 2011, he took to Facebook to praise the Jerusalem bus bombing in which British Christian evangelical student Mary Jane Gardner was murdered, and 67 others were injured.

In 2015, Salem applauded two acts of terror; a shooting that killed American teenager Ezra Schwartz, an Israeli man, and a Palestinian bystander; and a Jerusalem stabbing that killed three.

Some three years later, after being hired by the Times, Salem called for more violence following an attack that killed two IDF recruits in the West Bank. “Shoot, kill, withdraw: three quick operational steps…to bring peace to the hearts of sad people like us,” the inciting post read.

Those posts were all documented in the report by HonestReporting editor Akiva Van Koningsveld that led to Salem’s dismissal.

Unlike others caught spewing hate online, Salem has not deleted his posts, nor has he expressed remorse.

What he has done is portray himself as the victim of a conspiracy against the Palestinian people and tastelessly mock Van Koningsveld’s background.

As I understood later, the decision was made based on a report prepared by a Dutch editor – who obtained Israeli citizenship two years ago – for a website called Honest Reporting.

Salem’s claims were immediately endorsed by anti-Israel activists and organizations, including IfNotNow, which claims to represent American Jews advocating to end what it calls “U.S. support for Israel’s apartheid system and demand equality, justice, and a thriving future for all.”

In a now-deleted tweet, IfNotNow argued that Salem was “fired for speaking out against Israel’s apartheid system.” 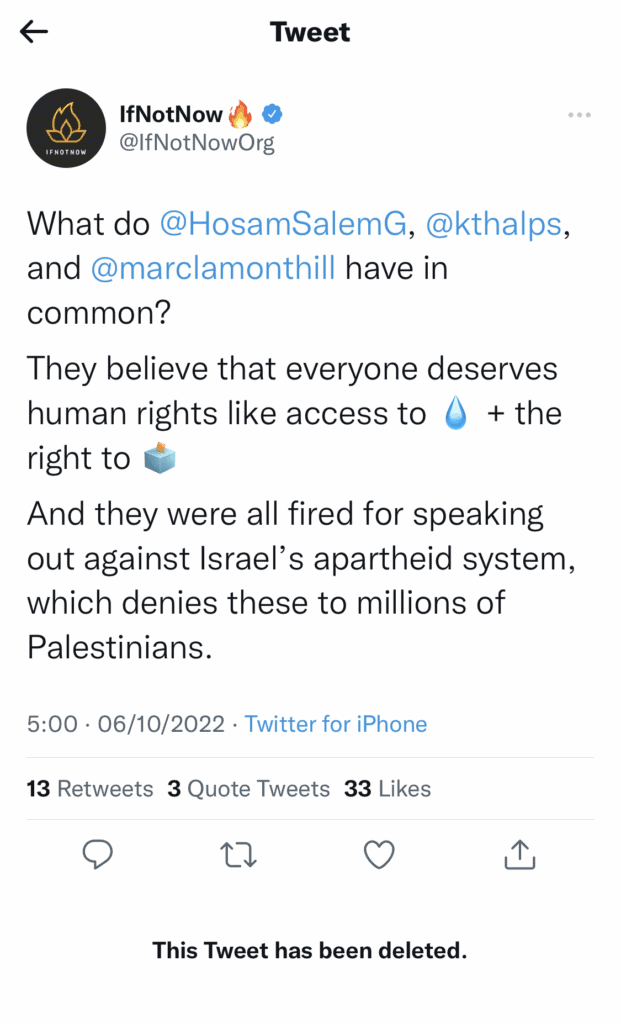 The truth is that Salem has not used the word “apartheid” in English or Arabic on his Facebook page. And while pro-Israel advocates may be amused to see such an anti-Israel organization attack The New York Times, one can only hope that IfNotNow’s supporters do not endorse opening fire in a synagogue in pre-1967 Israel, or anywhere else for that matter.

IfNotNow tried to equate Salem with Katie Halper, who will no longer deliver commentary on The Hill TV after HonestReporting’s senior editor Rachel O’Donogue and others highlighted her baseless accusations against Israel. Halper lost her job due to her history of flagrantly lying about Israel and promoting her feelings as facts — meaning she was fired for shoddy journalism, not for opposing Israel’s policies or defending one member of Congress or another.

Other anti-Israel advocates, including British rapper Lowkey, made a point of noting that current and previous employees of HonestReporting have served in the IDF, while failing to note that none of them have ever called for the murder of anyone on social media.

“Three Jewish reporters, Ethan Bronner, Isabel Kershner, and David Brooks, carried on writing about [Israel] for The New York Times even when their children were enlisted in the Israeli Defense Forces,” the anti-Israel website Mondoweiss wrote in defense of Salem.

I do not hide the fact that I served in the Spokespersons Unit of the IDF during my years covering Israeli politicians. I am no longer called for reserve duty. As the Executive Director of HonestReporting, I take full responsibility for anything I say in any forum. Salem must be held similarly accountable for anything in his name, whether it is in English in the Times or in Arabic on Facebook.

That is why HonestReporting exists — to be a watchdog monitoring mainstream and social media and combating ideological prejudice. The next Hosam Salem will have to think twice before praising murder in a public forum.

We will continue to expose biased journalism and fight back for Israel and the Jewish people, in an effort to regain Israel’s deterrence on the media battlefield.

Kudos to the @nytimes for stopping to employ a photographer who publicly glorified Palestinian terrorist attacks that killed a total of at least 35 innocent Jews, Muslims, and Christians. Praise for opening fire in a synagogue and killing people at prayer is not fit to print. https://t.co/6ErbzZyohV