Shatha Hammad has repeatedly joked about Adolf Hitler, lavished praise on Palestinian terrorists who have murdered innocent Jews, and denied that Israel has any right to exist.

Despite this profoundly disturbing social media history, Hammad was recently handed a prestigious journalism award and cash prize by the Kurt Schork Memorial Fund (KSMF), which is supported by the charitable arm of global wire service Reuters.

Announcing Ramallah-based Hammad as the winner of its 2022 Local Reporter Award on October 13, the KSMF lavished praise on her work reporting from the West Bank.

“Taking great personal risks, which once resulted in her being hit in the face with a teargas canister, Hammad’s stories expose the impact of the conflict on Palestinian civilians,” the press release gushed.

HonestReporting has now uncovered dozens of violent and antisemitic posts on Hammad’s Facebook page, including one in which she eulogized the “martyrs” who killed five “settlers” during the 2014 Jerusalem synagogue massacre in which two Palestinian terrorists attacked worshipers with axes, knives, and a gun.

In several posts in 2014, Hammad, who currently works for Middle East Eye and Al Jazeera, signed off her comments using the nickname “Hitler,” and joked that she was “in agreement” with the Nazi leader who oversaw the mass extermination of six million Jews during the Holocaust.

In another post — originally written in Arabic but translated into English by HonestReporting — she described herself as “friends” and “one” with Hitler, adding they have the “same mentality, like, for example, the extermination of the Jews” alongside a smiley face emoji. 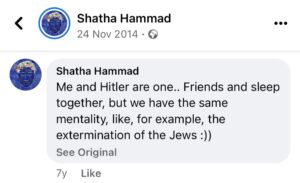 In a 2016 Facebook comment, Hammad suggested Israel is not a legitimate country, and questioned whether Jews have the right to self-determination.

Sadly, she is the latest in a series of Palestinian journalists whose virulently antisemitic views HonestReporting has exposed during the course of our investigative work.

On August 11, we put a spotlight on the horrifying social media history of Fady Hanona, a freelance producer and fixer who was credited by The New York Times in multiple stories published during the September conflict between Israel and Palestinian Islamic Jihad. Hanona had described Jews as the “sons of dogs,” and called for killing every “Jew, Israeli or Zionist, or anyone else who speaks Hebrew.”

In response to our work, The New York Times, VICE News, the BBC, The Guardian, SBS Australia, and ABC News Australia all moved to cut ties with Hanona.

Last year, our revelations about reporter Tala Halawa, who had tweeted that “Hitler was right,” forced the BBC to cut ties with the journalist.

HonestReporting has reached out to both the Thomson Reuters Foundation and the Kurt Schork Memorial Fund to ask whether any action will be taken to distance themselves from Hammad given the violent and antisemitic nature of online outbursts.

It is critical that both of these respected organizations distance themselves from these views.

Antisemitism is on the rise globally. Every day, we see ugly incidents and expressions of anti-Jewish hatred playing out on the streets, campuses, workplaces and online. This type of language incites more violence against Jews globally and does nothing to advance the cause of peace locally.