How Speaking Up Can Help Jewish College Students 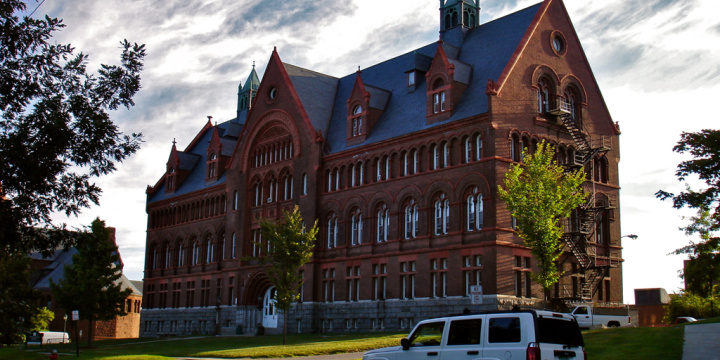 The Williams Science Hall at the University of Vermont Photo. Kaya/Flickr.

The publicity surrounding the US Department of Education’s Office of Civil Rights investigation into antisemitism at the University of Vermont (UVM) has thrust Jewish students to the center of  attention. Increased publicity surrounding Jewish issues in Vermont began with last year’s Burlington City Council vote on the Boycott, Divestment, and Sanctions (BDS) movement, and then continued with Ben & Jerry’s decision to stop selling goods in Israel.

Throughout this time, I’ve received calls and emails from alumni, parents, and organizations, all wanting to know how things were going in the state and at the University of Vermont, and what could be done to improve the situation?

Here is what I’ve seen.

Last month, hundreds of students celebrated Rosh Hashanah with Hillel, proudly and publicly in the center of campus. Last week, students prepared Shabbat meal kits of kale and potatoes grown on our Hillel farm last summer. Our students studied Jewish agrarian traditions and agricultural innovations alongside UVM faculty and Hillel educators, while working to alleviate food insecurity. We have a full Birthright Israel trip this winter. Jewish life, learning, and connections to Israel are thriving, even though antisemitism exists at UVM.

Jewish students across the country experience hatred in both subtle and overt ways, either through ignorance or willful intent. I’m certain that Supreme Court Justice Louis D. Brandeis did not envision campus life when writing an article titled, “What Publicity Can Do” about banking reforms for Harper’s Weekly in 1913.

However, his note that “publicity is justly commended as a remedy for social and industrial diseases” rings true for campus antisemitism and so many other issues students experience.

The publicity surrounding antisemitism at UVM has helped students find their voice to speak out and stand up for their right to be Jewish without preconditions, or needing to hide an integral part of their identity — such as their connection to Israel — to be accepted by others.

The first way to combat bias, harassment, and antisemitism is to speak out about it, draw attention to it, and shine a light on this virulent hatred.

Here are some other ideas I heard directly from Jewish students, friends, and allies during the listening sessions that UVM held a few weeks ago.

When Jewish students report bias as antisemitism, the school must act promptly and publicly to condemn hateful speech and acts, or else they will continue unabated.

There should be ongoing education and training for the campus community to better understand the intertwined complexity of Jewish identity, antisemitism, and Israel.

Judaism is not just a faith-based religion, but a multi-faceted identity. Students should be allowed to freely express themselves whether their identity is based on religion, ethnicity, culture, a connection to Zionism, Israel, or none of the above. Jewish students should be the ones to define their Jewish identity for themselves.

Discrimination impacts everyone with a historically marginalized identity — and Jewish students should not be treated differently when they experience bias and harassment because of who they are.

Students feel supported by Hillel and they want us to continue serving as a bridge to the university on issues of Jewish identity, inclusion, and equal treatment.

My experience from 20 years of work with Hillel says to engage these students in conversation, listen to them, and learn from them. Antisemitism is dangerously real. Universities and colleges must lead the way in publicly and clearly condemning antisemitism and proudly supporting Jewish students as diverse, equal, and included members of their campus communities.

Matt Vogel is the Executive Director of Hillel at the University of Vermont, and has spent his career supporting Jewish students on campus.