The Palestinians Have a New Celebrity Terrorist Murderer 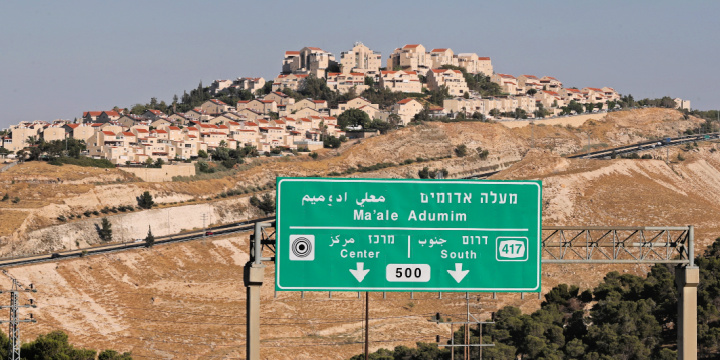 Uday Al-Tamimi is the Palestinian Authority (PA) and Fatah’s newest celebrity terrorist. The reason for his fame is that he murdered 18-year-old female Israeli soldier Sgt. Noa Lazar, and wounded an Israeli security guard at the Shuafat checkpoint in northern Jerusalem last month, and 10 days later wounded another Israeli security guard in Ma’ale Adumim, before being shot and killed by guards.

Terrorist Al-Tamimi’s murder of Lazar in a surprise attack, his roaming free for more than a week, and his final attack on Israeli security guards have earned him a place in the PA’s spotlight of “heroes.”

Not only have PA and Fatah officials praised him and his attacks, but Palestinian youth have adopted a trend of shaving their heads to look like Al-Tamimi. And not just youth — official PA TV broadcast a video of a toddler having its head shaved as a tribute to the murderer Al-Tamimi, while a song lauding him was played in the background: 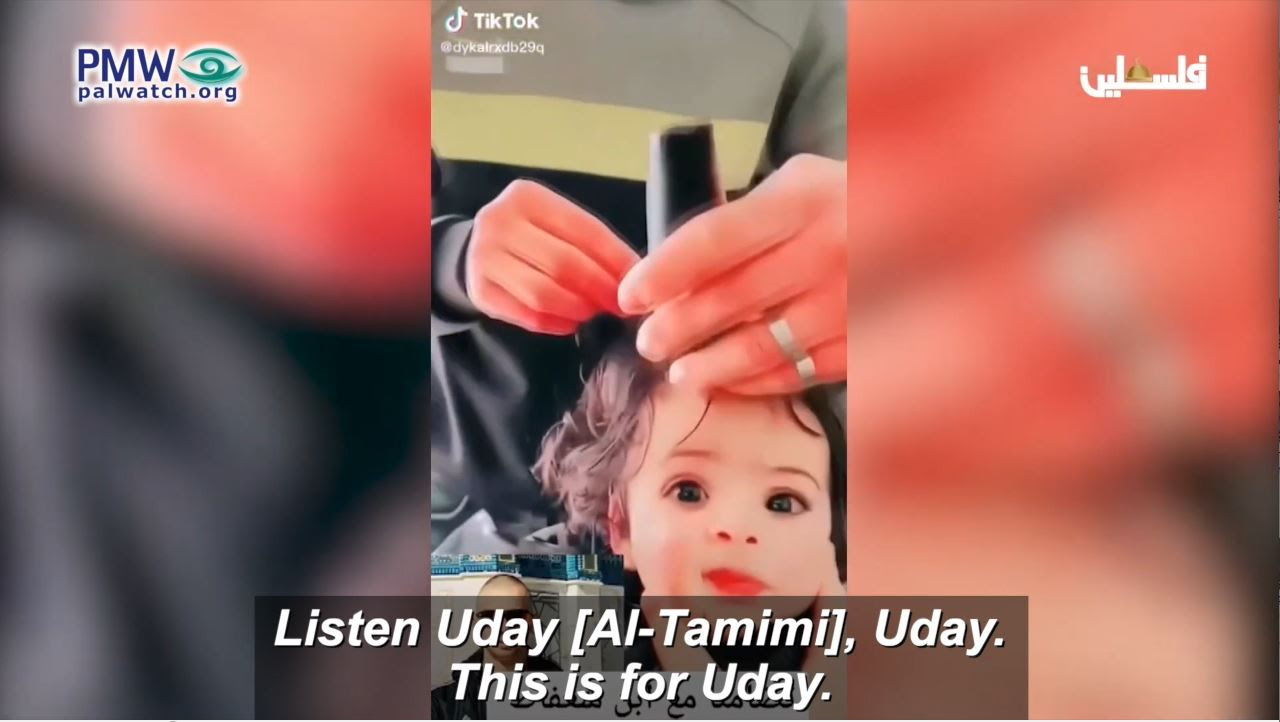 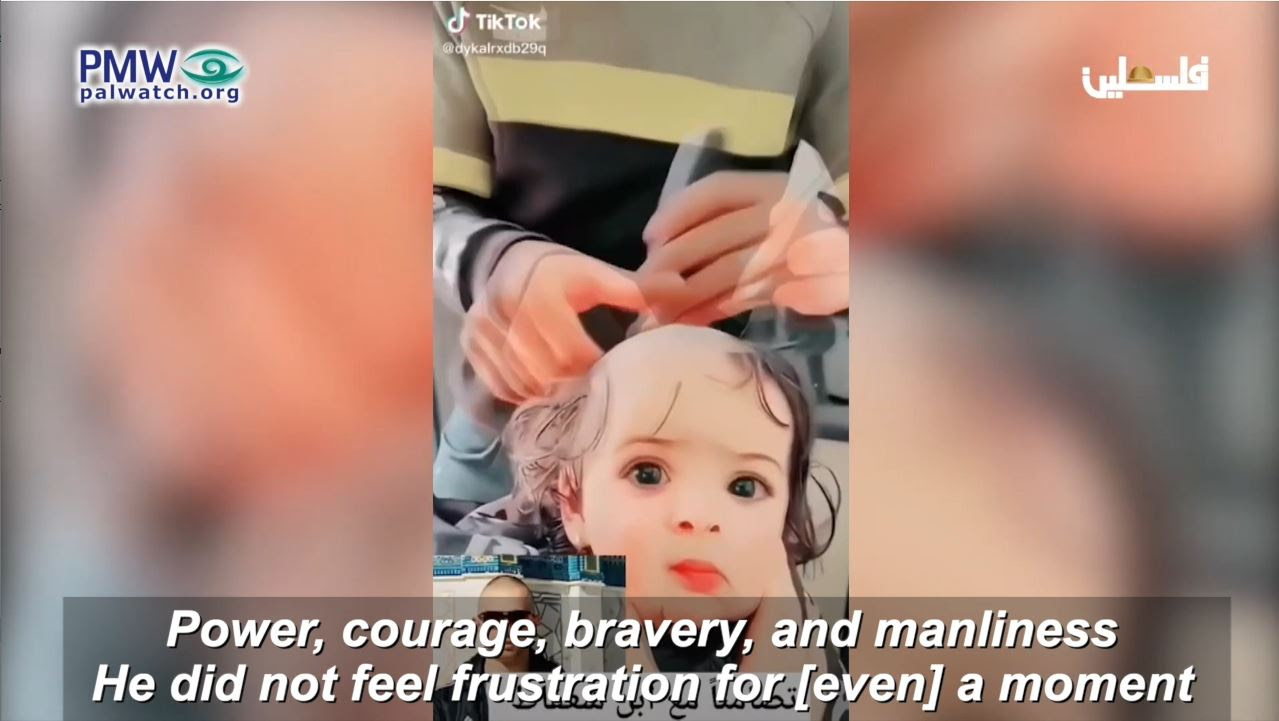 He did not feel frustration for [even] a moment

He humiliated your [Israeli] soldiers

This is our hero, and he is from Shuafat

Be blessed, man of heroic acts …

[With] resolve and a fierce desire, he knows no defeat

Your blow is painful, O son of Shuafat”

The PA supported this trend with a cartoon that highlighted the shaved head as the terrorist’s trademark:

Text on cartoon: “Blessings to you, The steel of Palestine”

Palestinian Media Watch (PMW) has already reported that a physics test in a Palestinian school glorified the murderer by asking students to calculate “the path of the Martyr” from his home to his last attack.

Via its official TV station, the PA has openly endorsed the murderer as the one who “frightened the entire [Zionist] entity.” The PA TV host also vowed that more terrorists will follow, as the PA “will give birth to another 1,000 Udays”:

Official PA TV host: “The solidarity is continuing Uday [Al-Tamimi], even after your death as a Martyr. Uday, whom the occupation pursued more than 10 days, frightened the entire [Zionist] entity, and in the end Uday triumphed through his death as a Martyr, when he charged forward and did not flee … Uday died as a Martyr and we will give birth to another 1,000 Udays, and the story continues.” [emphasis added]

The young Palestinians themselves also vow to “follow his path”:

Dozens of young Palestinians set out on Wednesday evening [Oct. 19, 2022] on spontaneous processions that passed through the streets of the cities Ramallah, Jenin, and Bethlehem and the Shuafat refugee camp, and they condemned Al-Tamimi’s assassination and demanded a response.

During the procession the young people promised Martyr Uday Al-Tamimi to follow his path in resistance to the occupation wherever [the occupation] is found.”

Palestinan Media Watch reported that immediately after the murderer was killed, that the PA instructed preachers to praise the murderer as a “hero” and glorify “Martyrdom-death” in the Friday sermons in the mosques.

In an editorial in its official daily, the PA praised the murderer as “personifying heroism.” The PA also used his attacks and consequent death to repeat their glorification of Martyrdom-death, stating that the murderer realized that “death as a Martyr in an epic battle is a certain way to start life with freedom, glory, honor.” Furthermore, the PA stressed that his terror attacks are an expression of “shining Palestinianess,” “national education,” and the “ethics of struggle”:

“This colony [Ma’ale Adumim] is like a fortress with guards with the most advanced weapons, but heroism does not care about that. In this case it was personified by none other than Uday Al-Tamimi he understood without a doubt… that death as a Martyr in an epic battle is a certain way to start life with freedom, glory, honor, and peace for Palestine and its residents…

Uday Al-Tamimi… only spoke there with actions, with what he represents and what he is affiliated with, and that is how heroes always are.We will not emphasize here his affiliation with Fatah, but rather his shining Palestinianess, with his national education and his ethics of struggle – and this is what pleases Palestine.”

Another article in the PA daily called Al-Tamimi’s last shooting “a prominent example of a surprise attack.” It stressed that killing Israelis and dying as a Martyr is what makes you famous in the PA, as “now the name of Uday Al-Tamimi is engraved in the Palestinian memory” and “tens of thousands of children in Palestine will be named after you.”

Fatah too has expressed its support for the terrorist. One of its spokesmen called his last “a brave operation, an act of heroism”:

Fatah Spokesman in Jenin Fares Abu Al-Wafa: “The situation of Martyr Uday Al-Tamimi has caused a general national response, because his action was a brave operation, an act of heroism, which gained approval and support from the members of the Palestinian people.”

At a condolence visit with the family of the murderer, Fatah Central Committee member Abbas Zaki said that Al-Tamimi’s “death as a Martyr” and that of another terrorist “caused an awakening and restored the esteem to Hebron,” and that their attacks “are rare acts of heroism.” Zaki added that the “blood that flows on a daily basis from our Martyrs, such as the blood of Uday Al-Tamimi … and the blood of all the Martyrs paves the way for our people to its dream of establishing an independent state whose capital is Jerusalem.” [Facebook page of Fatah Central Committee member Abbas Zaki, Nov. 1, 2022]

Fatah Central Committee member Tawfiq Tirawi paid condolence visits to murderer Al-Tamimi’s family and referred to the murderer as “a hero of Palestine” on social media, where he also spoke of the murderer as if he were a knight who “got down from his horse while charging forward and not fleeing, while recording the most incredible verses of sacrifice”: 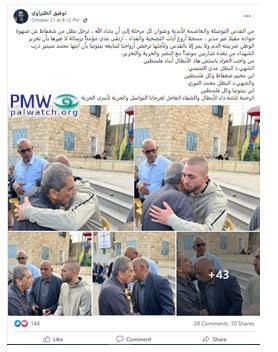 Murderer Al-Tamimi allegedly left a will, in which he stated that his goal was that “following [my] operation hundreds of young [Palestinians] will carry the rifle after me”: 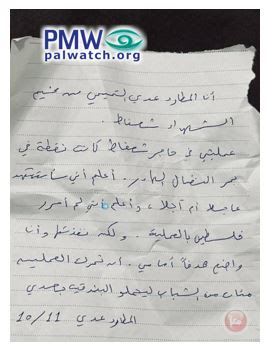 “I am the wanted man Uday Al-Tamimi from the Shuafat Martyrs’ camp. My operation [i.e., terror attack, 1 murdered] at the Shuafat checkpoint was a drop in the ocean of the raging struggle. I know I will die as a Martyr sooner or later, and I know that I didn’t liberate Palestine with the operation, but I carried it out while setting a central goal: Following [my] operation hundreds of young [Palestinians] will carry the rifle after me.

The terror organization Democratic Front for the Liberation of Palestine (DFLP) praised the murderer and his attacks, stating that “the heroic operation … at the Shuafat refugee camp checkpoint …  shook the occupation’s foundations.” The DFLP further stressed that “the Palestinian people and young people have chosen the path of resistance in all its possible forms [i.e., term used by Palestinians, which also refers to the use of violence and terror] as a way to achieve our people’s goals of removing the occupation.”